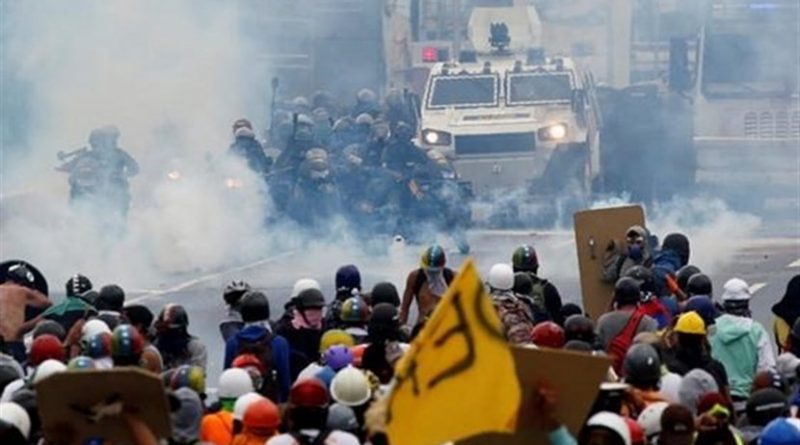 The White House says President Donald Trump reinforced his “strong support” for efforts to restore democracy in Venezuela during a conversation Wednesday with opposition leader Juan Guaido, who has proclaimed himself as the country’s president.

White House Press Secretary Sarah Sanders said Trump and Guaido also committed to maintaining “regular communication to support Venezuela’s path back to stability, and to rebuild the bilateral relationship” between the two countries.

Trump said earlier Wednesday that embattled Venezuelan President Nicolas Maduro is willing to negotiate with representatives of Guaido’s opposition movement to solve the political crisis in the South American nation, but warned Americans not to travel to Venezuela “until further notice.”

​He added the threat of U.S. sanctions, including cutting off Venezuelan oil revenues, contributed to the apparent softening of Maduro’s stance.

Maduro made the offer earlier Wednesday during an interview with Russia’s RIA news agency, saying he is willing to sit down at the negotiating table “for the good of Venezuela.” But he said there will not be a new presidential election until 2025, rejecting a demand by Guaido, president of the opposition-controlled National Assembly.

Guaido declared himself the nation’s interim president last week after the Assembly declared Maduro’s presidency illegitimate, arguing that his re-election in May 2018 was not fair, with most opposition candidates either prevented from running or boycotting the race. The United States has recognized Guaido as the country’s interim leader.

Venezuelans took to the streets of Caracas Wednesday in response to Guaido’s call for a peaceful, two-hour, midday protest “to demand that the armed forces side with the people.” He is offering amnesty to soldiers who back his movement and reject Maduro’s socialist government.

In a CNN interview Tuesday, Guaido said it is possible to have a peaceful transition from Maduro and eventually hold free elections.

President Trump also noted in his tweet that Guaido “is being targeted by Venezuelan Supreme Court,” a reference to a request by the country’s attorney general, Tarek William Saab, for the high court to prevent Guaido from leaving the country and block his financial accounts. Saab announced Tuesday that he was launching a criminal investigation into Guaido’s activities against Maduro’s socialist government, because of the unrest that followed Guaido’s declaring himself the country’s legitimate president.

Bolton advised the global business community on Twitter Wednesday not to “deal in” Venezuelan oil or other commodities “being stolen from the Venezuelan people by the Maduro mafia,” and added, “We stand ready to continue to take action.”

To the surprise of many, a large Russian passenger plane arrived Monday night Maiquetia Airport outside Caracas, fueling speculation Maduro’s administration plans to use the plane to transport the remainder of the country’s depleted gold reserves. There has been no response from Maduro’s government, but a representative of Russia’s Norwind Airlines confirmed the plane’s arrival.

Russia is leading a group of U.S. adversaries that are supporting Maduro’s regime. Citing sources, Reuters reported Wednesday that private military contractors who conduct secret mission for Russia were in Venezuela.

The Trump administration has imposed sanctions on PDVSA, Venezuela’s government-owned oil company. The sanctions announced Monday will freeze any assets the state-owned PDVSA has in the United States, and bars U.S. firms and citizens from doing business with it.

PDVSA’s U.S.-based subsidiary, Citgo, which refines Venezuelan oil and sells Citgo brand gasoline in the U.S., will continue to operate as usual. But any money Citgo earns will be placed in a blocked account.

Maduro said the United States is trying to “steal” Citgo from Venezuela.

Treasury Secretary Steven Mnuchin said Venezuela can get relief from the sanctions when control of the oil company is turned over to Guaido.

The collapse of world energy prices, corruption and failed socialist policies have created an economic and humanitarian crisis in oil-rich Venezuela.

Food, fuel and medicine are in extremely short supply. Inflation is out of control. Millions of Venezuelans have fled the country, and Maduro has shown little tolerance for opposition-led protests.

Maduro has blamed his country’s woes on the United States, which he accuses of working with the opposition to topple the government. During Wednesday’s interview with RIA, Maduro accused Trump of ordering his assassination, saying, “Donald Trump has without doubt given an order to kill me and has told the government of Colombia and the Colombian mafia to kill me.”

He has called world leaders who want him gone “Trump sycophants.”

Home » Trump, Guaido To Collaborate On Efforts To Restore Democracy To Venezuela