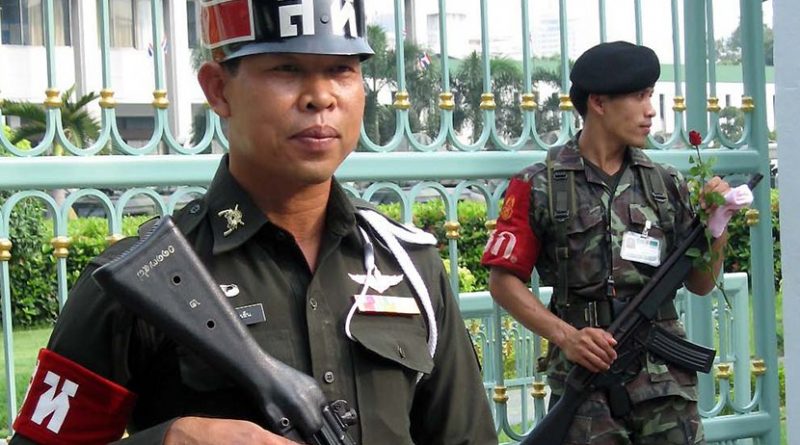 The Royal Thai Army declared martial law in Thailand on 20 May 2014. The announcement was made at 03:00 AM by the Commander in Chief General Prayuth Chan-ocha through the Army-owned television station, Channel 5. Thailand has been undergoing political instability since November 2013; a takeover by the Army was therefore a well anticipated climax. Moreover, military coups and declarations of martial law are not new to Thai political history. Since the establishment of the Constitutional monarchy in Thailand in 1932, the country had witnessed as many as seventeen successful military coups. The previous military coup that took place on 19 September 2006, like all other military coups in Thailand, led to the birth of a new Constitution in 2007. The newly installed martial law of 2014 has questioned the future of deomcracy in Thailand.

A Repeat of History: An Explanation

In April 2006, an ongoing protest against the then Prime Minister Thaksin Shinawatra compelled him to call for a snap election. However a boycott by the opposition led to the election being annulled. Thus, another election was proposed to be held in October 2006, which never happened. In September 2006, when the caretaker Prime Minister Thaksin Shinawatra was in New York for a speech at the United Nations, the Thai Army staged a military coup.

The situation in 2014 was quite similar to the above. The anti-government protesters staged a massive campaign demanding the withdrawal of the government formed by the Pheu Thai Party in 2011. The protests obliged the former Prime Minister Yingluck Shinawatra to announce early elections in February 2014. However, the election was declared invalid due to disruption by the opposition protesters. The situation deteriorated when the Constitutional Court ordered Yingluck Shinawatra and several other ministers out of the office on allegations of irregularities in the appointment of an official. This immediately instigated protests by the pro-government Red Shirts in huge numbers. Meanwhile, the Army declared martial law in Thailand by reviving the age old law of 1914.

The core problem of all the political instabilities in the country has been hunger for power and the fact that the whole political and legal system is infected with chronic corruption. This widespread corruption has made the governing structures biased and dysfunctional.

The fact that the first military coup took place within a year of the establishment of the Constitutional monarchy could imply that there were loopholes in the fundamental governance structures of Thailand. Both in 2006 and in 2014, the military coup and the declaration of martial law were justified by the Army in the name of restoring peace and order. However, the many military coups have indicated that military intervention in the name of restoring democracy has not been able to achieve its long-term purpose. Moreover, leaders have essentially been manipulating the military and other organs of governance as tools to win political games. There has thus been a lack of strong governance structures every time the Army has withdrawn and a new government has been elected because the Army has never gone in with a set agenda.

Moreover, the political polarisation in the pro-Shinawatra and anti-Shinawatra groups has made Thai politics critical. Thaksin Shinawatra, who came to power for the first time in 2001, was able to achieve enormous support from the rural vote bank in north and northeast Thailand. However, he failed to appease the middle and elite class Thais who encompass the anti-Thaksin group. Thaksin Shinawatra’s maltreatment of the insurgency in southern Thailand also defamed him in the south. Thus, the polarised groups can also be termed as the rural Red Shirts versus the elite and middle class group. The 2013 uprising against the government had its root in this past. The anti-Thaksin group has blamed Yingluck Shinawatra’s government of acting as a puppet in the hands of her brother, Thaksin Shinawatra.

It should be noted that the protesters, who belong to one or the other group, have not earned any legitimacy. Although several issues like corruption and weak governance have been highlighted in these protests, none of the protests themselves have been perceived as addressing the root causes of these problems. The reason for the lack of legitimacy is that the demands are alleged to be either the demands of the elitists or the rural supporters of Thaksin Shinawatra.

End of the Coup?

Since the Army takeover on 20 May 2014, Thailand is witnessing an anti-coup movement. Presently, the Army has dissolved the Constitution and the upper and the lower houses of Parliament. Several politicians, academicians and bureaucrats have been detained by the military. Unlike other protests in Thailand, the anti-coup protest involves people from all walks of life fighting for their rights, and on behalf of any particular political group. This may thus pave the way towards a revival of democracy in Thailand.

Home » Thailand: Why Is History Repeating Itself? – Analysis