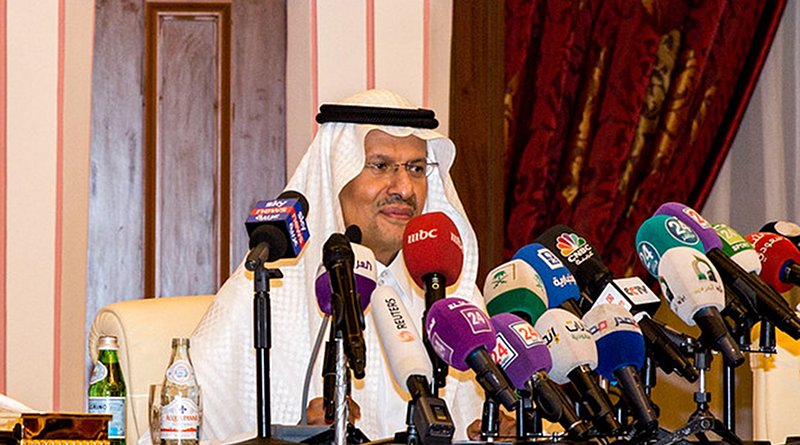 Banking sources at the FII believe that the IPO could be launched within days, ahead of a listing on the Saudi Stock Exchange (Tadawul) in early December.

The minister’s comments came at an FII session on the future of energy, at which he also launched a campaign to develop a “circular carbon economy” for sustainable growth in the Kingdom and the world.

He told delegates at the FII that Saudi Arabia, because of its prominent role in the global energy industry, has an important role to play in finding a solution to the issue of sustainable economic growth, which has come to the fore due to the climate change debate.

“Considering our pivotal role, it’s our responsibility to find solutions through innovation and collaboration to create a sustainable framework for growth,” he said.

“A holistic and pragmatic approach is needed to achieve more sustainability in the economic system.”

The circular carbon economy that the world should adopt was based on a new approach to fossil fuel emissions and greenhouse gasses in which the rules of the “4Rs” would apply: Reduce, reuse, recycle and remove.

“Such a closed-loop system, much like what happens in nature, will help restore the balance of the carbon cycle,” the minister said.

“It offers a new way of addressing the challenges of sustainable development that implicitly values all options and encourages all efforts to mitigate carbon accumulation in the atmosphere, while also facilitating global economic growth,” he added.

“Adoption of this holistic model is vital because, as important as renewables are, and as much progress as they’ve made in recent years, most analyzes suggest the world can’t achieve a balance between ‘sources and sinks’ through renewables and reduction alone,” he said.

“Much of the world’s energy is consumed in sectors that are hard to decarbonize, such as heat, industrial processes and transport. So achieving a carbon balance will inevitably include fossil fuels. However, their carbon emissions must be managed.”

Several energy initiatives in the Kingdom are underway as part of the circular carbon economy, the minister said.

The energy efficiency program in buildings and the petrochemicals industry, as well as improving vehicle efficiency and energy pricing reforms, are examples of the Kingdom’s new approach to energy.

There are also plans to advance Saudi carbon capture plans. The Kingdom currently operates the largest carbon capture and utilization plant in the world, turning half a million tons of CO2 annually into products such as fertilizers and methanol.

“We believe that nature-based solutions will play an important role in removing carbon as part of the circular carbon economy,” the minister said.

“Recognizing this, we’re taking actions to achieve these goals, including expanding our mangrove forests and plantations, seagrass meadows and coral reefs in both the Red Sea and Arabian Gulf.”

The Saudi initiative won the support of several of the high-profile panelists at the FII, including US Energy Secretary Rick Perry and Andrew Liveris, an adviser to the Kingdom’s Pubic Investment Fund.

Perry said his home state of Texas had made big investments in wind power and natural gas as ways to reduce carbon emissions.

Liveris said: “We should see sustainability and the circular economy as a business opportunity.”