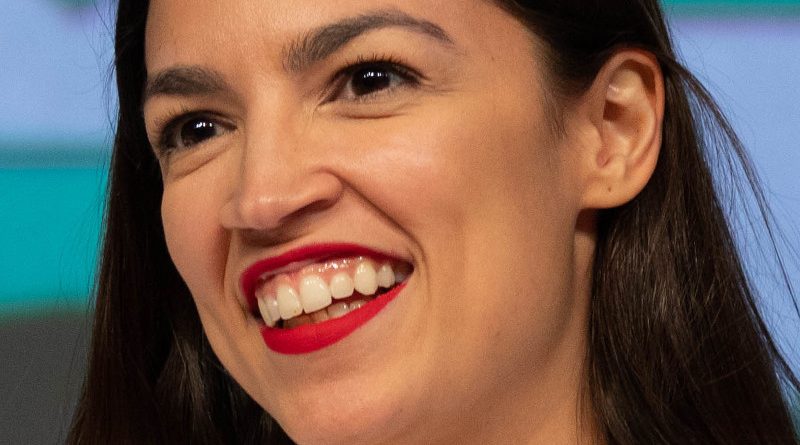 Alexandria Ocasio-Cortez has touched off fresh controversy in a Vanity Fair cover story. Although she called the president of the United States a “motherf—er” and expresses her interest in seeking a “higher position” in politics, what caught the public imagination is its accompanying photo shoot in which the democratic socialist’s apparel in no way resembled the clothing of the proletariat. AOC wore clothing designed by Aliette, Carolina Herrera, Wales Bonner, Christian Louboutin, and a $2,850 dress from Loewe, which the magazine reportedly gifted to the congresswoman after she complained that it takes “me so long to try to figure out how to look put-together without having a huge designer closet.” In all, the clothes in the portfolio reportedly cost $14,000.

She replied to public backlash by claiming that her critics are “mad that I look good in borrowed clothes.” (To this author’s knowledge, no one referenced her physical appearance.)

The fashion flap demands that AOC watch the video of the Acton Institute’s 29th annual dinner last October – in part because Rev. Robert A. Sirico mentions the congresswoman by name. Unlike “true believers” like Bernie Sanders and “radical upstarts, like Alexandria Ocasio-Cortez,” many young people “see socialism as a mere shorthand for an equal and just society,” he says.

“I should know, because I was once one of them,” he says. “My belief in the need for a more just society had originally led me to embrace leftist activism during a revolutionary period in American history.”

As he tells it, in the 1970s, “If there was a sit-in, I was sitting in.” One evening, he says he recalls “sitting with my comrades in an apartment I had in Los Angeles at the time, where we went around expressing our respective visions of the future. Once the revolution came, what would society look like?”

“Then, we thought, everyone would be equal. Classism, homophobia, sexism would be no more” – concerns echoed by today’s budding socialists.

When “it became my turn to speak,” he says, “I said, ‘Yes, when the revolution comes, we’ll all shop at Gucci.’ Silence joined the smoke that filled that room, that hung in the air that night – fumes that have recently become legal in Michigan. And unlike Bill Clinton, I admit I inhaled.”

He continues, when “a delightful friend” pushed him to explain, “I said, ‘Well, it’s a metaphor. It’s a metaphor for the kind of society we’re trying to build, right? A world where everyone will have access to quality goods and services.’”

That sounds very much like the definition of socialism proffered by Alexandria Ocasio-Cortez. She told Business Insider that “democratic socialism means” everyone can enjoy “basic levels of dignity, so that no person in America is too poor to live.” History shows that minimal level proved beyond the capacity of actual socialist economies.

In time, his belief in human flourishing led the future co-founder of the Acton Institute to embrace free-market economics. He credits a conservative friend who engaged with him and educated him. He, too, asked Rev. Sirico what would happen the day after socialists redistribute the nation’s wealth, forcing the wealthy to liquidate their stocks in the corporations that fulfill consumers’ needs in the process:

“My shallow socialism, and overall cultural Marxism, began to fade,” he says. “I came to see how all of the source of the summit of economics … is the human person.”

Today’s democratic socialists should contemplate the same economic realities and come to their inevitable conclusion. A worldview that sees the human person as the center of the divinely created order would invite employers to offer struggling people jobs, not boast about chasing out Amazon’s offer of 25,000 jobs paying $100,000 each. It would see the human race as bearers of God’s image rather than embracing materialism. It would welcome the prospect of more human beings being born and reversing the global population bust rather than asking, “Is it OK to still have children?”

AOC and her admirers could stand to learn the same lessons as Rev. Sirico.

Watch the full video below: