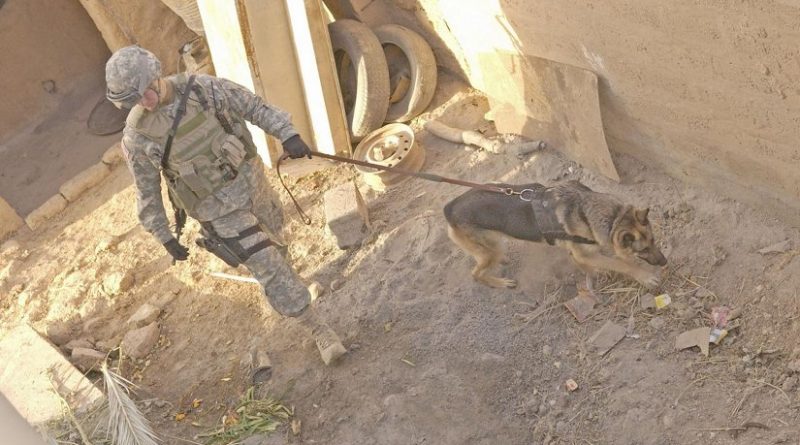 An Air Force dog handler attached to the US Army 25th Infantry Division searches for explosive devices during a raid in Iraq in 2006. VA researchers found that guerilla tactics such as suicide attacks and roadside bombs may trigger more PTSD than conventional warfare. Credit: U.S. Air Force

Guerilla tactics such as suicide attacks and roadside bombs may trigger more posttraumatic stress than conventional warfare, suggests a Veterans Affairs study of 738 men and women who served in Iraq.

The study authors are with the Behavioral Science Division of the National Center for PTSD, based at the VA Boston Healthcare System, and with Boston University School of Medicine.

They identified three distinct phases of the Iraq War, based on previous reports. Then they analyzed whether veterans who fought during the insurgency phase, during which more guerilla-style tactics were used, were more likely to develop PTSD than those who deployed during the initial invasion phase of the war, or the more recent surge phase.

The study found that among the men — about half the overall group — the insurgency-phase veterans were more than twice as likely to have a diagnosis of PTSD, compared with those who served in either of the other two phases.

The finding held true even after the researchers adjusted for a range of other demographic and deployment-related risk factors.

The trend was not seen among the women in the sample, although the authors aren’t sure why. Citing other research, they say there may be a somewhat different mix of factors that influence PTSD among women service members and veterans.

The team, led by Dr. Jonathan Green, writes that on the whole, the study suggests that enemy combat tactics may be under-appreciated in understanding what drives PTSD. They note that “assessment of the nature of combat may be useful in research and in clinical settings.”

They write, also, that the relatively high rates of PTSD among Vietnam War veterans may be explained, at least in part, by looking at the type of enemy tactics those troops faced. The researchers compare that war, on the whole, to the insurgency phase of the Iraq conflict.

Previous studies that aimed to compare PTSD rates between wars — say, Iraq and Vietnam — didn’t allow researchers to control for shifting generational norms and differing social and political climates. As such, Green’s team focused their analysis only on the Iraq War.

Still, they acknowledge there were factors they didn’t control for that could affect PTSD rates, such as the intensity of combat or social or political factors that changed even during the course of the Iraq War.