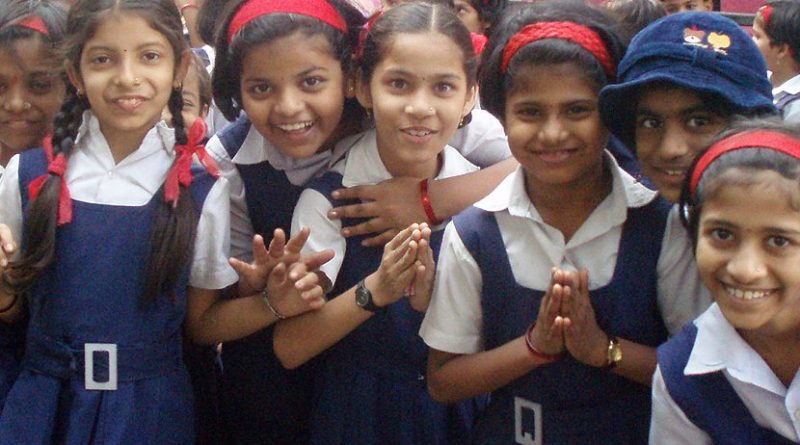 Schoolgirls in Mumbai, India. Photo by the opoponax, Wikimedia Commons.

Some studies have shown that pupils from single-sex schools outperform their counterparts at mixed-gender schools. This column attempts to disentangle the causal effects by exploiting a government policy in South Korea that led to some single-sex schools converting to co-ed one grade at a time. Academic performance fell for boys when their schools became co-ed even if their class remained single-sex, but performance only fell among girls whose classes became mixed. These results suggest different mechanisms for the effects of mixed-gender schools on boys’ and girls’ academic performance.

By Christian Dustmann, Hyejin Ku and Do Won Kwak*

In recent years, single-sex education has attracted much policy interest as a potential tool for promoting pupils’ academic achievements and closing various types of gender gap. Proponents of single-sex education argue that the single-sex environment is beneficial to academic achievements for reasons such as students avoiding the attraction of the opposite sex, and being less likely to suffer from gender stereotypes. On the other hand, advocates of mixed education argue that boys in co-ed schools perform better as they are surrounded by female peers who are better behaved, and who perform better academically. Moreover, for both boys and girls, the mixed-gender environment is argued to be more conducive to the development of social skills, better preparing them for the ‘real world.’

A key question, therefore, is whether or not a single-sex environment improves pupils’ achievements and whether the effects are common for both genders. To make progress on this, one needs to estimate the causal effect of pupils’ exposure to single-sex versus mixed-gender peers. Estimating this effect is challenging, most importantly because the endogenous processes that sort students into schools.

We address this very question in a recent paper (Dustmann et al. 2017). We build on Park et al. (2013) who use an assignment policy in Seoul, South Korea, where students were randomly allocated to academic high schools within districts. These authors show, using data for a single cross-section (for the year 1999), that boys (girls) who were randomly assigned to all-boys (all-girls) schools outperform their counterparts at co-ed schools. However, the existing single-sex and co-ed schools in Seoul may differ not just in their pupil gender type but also in various observable and unobservable inputs that can affect student achievement. Therefore, even if pupils are randomly allocated to a single-sex versus a co-ed school, any differences in pupils’ outcomes between schools could be due to pupil gender type (the direct effect of pupil gender composition), or other observable and unobservable differences in school inputs (school effects). In turn, the direct effect of pupil gender composition could be due to exposure to mixed-gender peers at the school level, or at the classroom level. For policymakers who are considering creating a new single-sex school or a single-sex classroom, the key question is whether there are any direct benefits to being exposed to a single-sex versus mixed-gender learning environment on either the school or classroom level.

We identify three distinct parameters, using administrative data on the national college entrance exam, taken by South Korean 12th graders in 1996-2009. To address the sorting problem, we use – similar to Park et al. (2013), though based on multiple years of data – the random assignment of pupils to schools within school districts at each cohort. This allows us to address our first question:

We find robust evidence that pupils in single-sex schools outperform their counterparts in co-ed schools, by 5–10% of a standard deviation for boys and 4–7% for girls, with similar estimates across subjects (which include Korean, English, and maths). This is consistent with the findings reported in Park et al. (2013). While these effects measure the causal effects of attending a single-sex (versus co-ed) school on test scores in Seoul, this total effect is specific to that context, as it combines the direct effect of exposure to single-sex versus mixed-gender peers and context-specific differences in school inputs between single-sex and co-ed schools. Therefore, this parameter is of interest to students and parents in Seoul, but not generalisable to other settings.

To isolate the direct effect, we exploit the fact that some of the existing single-sex schools in Seoul converted to the co-ed type in the 1990s and 2000s due to a government policy that favoured co-education. This allows us to eliminate the effect of unobserved, time-invariant (and observed time-variant) school characteristics. That is, we can address the question:

Here, we exploit school type changes (in conjunction with the random school assignment), and compare cohorts that were exposed to either a single-sex or co-ed environment at both the school and classroom levels. We find that the conversion of school type from single-sex to co-ed leads to worse academic outcomes for both boys and girls, conditional on school fixed effects, suggesting that the combined effects of school- and classroom-level exposure to a single-sex (versus mixed-gender) environment are likely positive.

Finally, we make use of the fact that academic high schools in South Korea consist of three grades (grades 10, 11, and 12) and that the school-type conversion was conducted at the cohort level. Specifically, the first cohort admitted under the co-ed regime was exposed to mixed-gender peers at the classroom and school levels for three years. The preceding cohort, while not exposed to mixed-gender peers at the classroom level, were exposed to a school-level co-ed environment (and any school-wide changes due to the switch) for the last two of their three years of high school. To the extent that school-level exposure to the newly-co-ed environment affect these two cohorts similarly, the difference in attainment between the two cohorts (and the corresponding difference in non-switching schools) allows us to answer our final question:

We make use of the multi-grade nature of South Korean high schools, and the cohort-level conversion of pupil gender type. We find that class-level exposure to same-sex (versus mixed-gender) peers has a significant positive effect on the attainment of girls. Specifically, as we exogenously change the share of girls in the same cohort from 100% to around 50%, the achievement of girls in languages decreases by 8–15% of a standard deviation in the score distribution. For boys, however, the benefits of having same-sex (versus mixed-gender) peers in their cohort are small and statistically insignificant. In light of our findings about the direct effect above, this finding suggests that the presence of girls in the same school (even if not in the same cohort) distracts boys from academic pursuits. Girls on the other hand are less prone to such distraction effects, but suffer disadvantage when exposed to boys at the classroom level.

The main finding of our work is that the combined effect of school- and classroom level exposure to same-sex versus mixed-gender peers (what we phrased above as the direct effect) is likely positive for both boys and girls. However, the underlying mechanisms are different. For boys, the disadvantage of co-ed schooling is largely due to exposure to a school-level co-ed environment. For girls, however, it is classroom-level exposure to mixed-gender (versus same-sex) peers that explains the disadvantage from co-ed schooling.

While teenage boys may be more likely to be distracted than girls by a mixed-gender school environment (Coleman 1961, Hill 2015), girls may suffer more because of, for instance, an increase in disruptive behaviour (as discussed by Figlio 2007), or a diversion of the teacher’s attention to weaker students (as suggested by Lavy et al. 2012).

*About the authors:
Christian Dustmann, Professor of Economics, University College London and Director of the Centre for Research and Analysis of Migration

One thought on “Why Single-Sex Schools Are More Successful – Analysis”