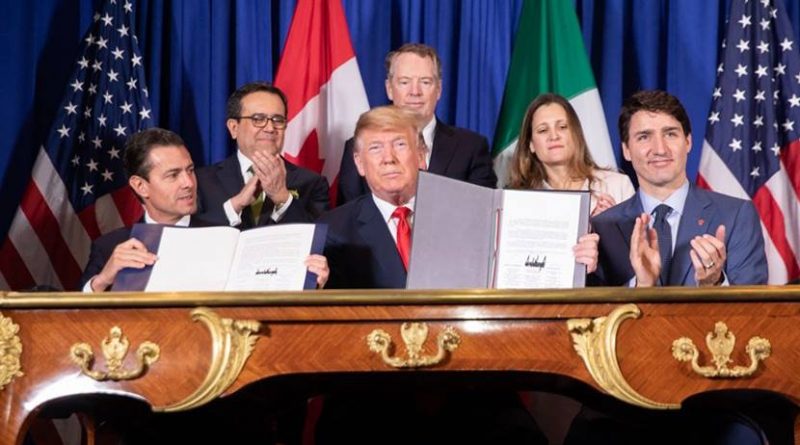 The leaders of the United States, Mexico and Canada have signed a new North American trade deal, underpinning $1.2 trillion in annual commerce among the three countries.

President Trump is calling the signing of the U.S.-Mexico-Canada Agreement (USMCA), following 15 months of frequently acrimonious negotiations, a “very historic day” for a “truly groundbreaking achievement.”

“The autoworkers are a tremendous beneficiary,” said Trump, adding that the USMCA will help stop automotive jobs from going overseas, and he predicted many such jobs will return to the United States.

The agreement’s intellectual property protection will be “the envy of nations all around the world,” said Trump at the signing on the sidelines of the G-20 leaders’ summit in Buenos Aires on Friday morning.

The USMCA replaces NAFTA, a pact Trump roundly criticized during his 2016 presidential campaign, terming it the worst trade deal in history and blaming it for the loss of American manufacturing jobs since it went into effect in 1994.

“We’ve taken a lot of barbs and a little abuse and we got there,” Trump said thanking Trudeau and Pena Nieto. “It’s great for all of our countries.”

It will be a while, however, before the agreement can take effect as lawmakers from all three countries must approve the USCMA.

“It’s been so well-reviewed I don’t expect to have much of a problem” getting the pact through the U.S. Congress, Trump said at the signing ceremony.

That could prove to be an overly optimistic assessment.

“It’s going to be a very tough sell,” predicts Congressman Bill Pascrell of the state New Jersey, who is one of the top Democrats on the House subcommittee that oversees trade issues.

The opposition Democrats take control of the House in January.

The National Association of Manufacturers is calling for swift approval by U.S. lawmakers.

“With 2 million American jobs dependent on exports to Canada and Mexico, Congress should move expeditiously to review the USMCA before the end of this year. We look forward to working with the administration and Congress to ensure the USMCA is implemented and enforced in a way that empowers manufacturers in America to continue investing in our people and our communities,” the powerful business group said in a statement released shortly after the signing ceremony.

Trump noted the signing in Argentina comes on the last day in office for the Mexican president, who is being succeeded by leftist Andres Manuel Lopez Obrador, elected five months ago.

“It is really an incredible way to end a presidency,” Trump said to Pena Nieto, promoting applause from the Mexican officials in the audience.

The outgoing Mexican leader hailed the as providing “more and better opportunities to our people,” predicting that “North America will grow stronger and be more prosperous.”

The Canadian prime minister agreed that it will “protect jobs, strengthen the middle class and create new opportunities for businesses.”

Trudeau, speaking in French and English, did not refer to the agreement by the USMCA acronym, instead calling it “the new NAFTA.” He also said, “the task isn’t done, more hard work is ahead.”

His government is officially calling the pact the Canada-US-Mexico Agreement (CUSMA).

Noting this week’s announcement by top North American automaker General Motors to close several factories in Canada and the United States, Trudeau lamented the factory shutdowns “are a heavy blow.”

“Make no mistake, we will stand up for our workers and fight for their families and communities,” added Trudeau.

The signing of the so-called free trade agreement comes at a time when tens of billions of dollars of tariffs remain in place on goods traded among the three countries.

“Tariffs on imports of steel and aluminum are entirely inconsistent with the overall goals of the USMCA,” according to a letter signed by the U.S. Chamber of Commerce and groups representing auto, chemical, grocery, retail and agricultural interests.

Mexican negotiators reportedly desire modifications to limit future metal shipments to the United States to 80 percent of current levels, while Canada is resisting quotas in the face of inexpensive steel from China entering the American market.