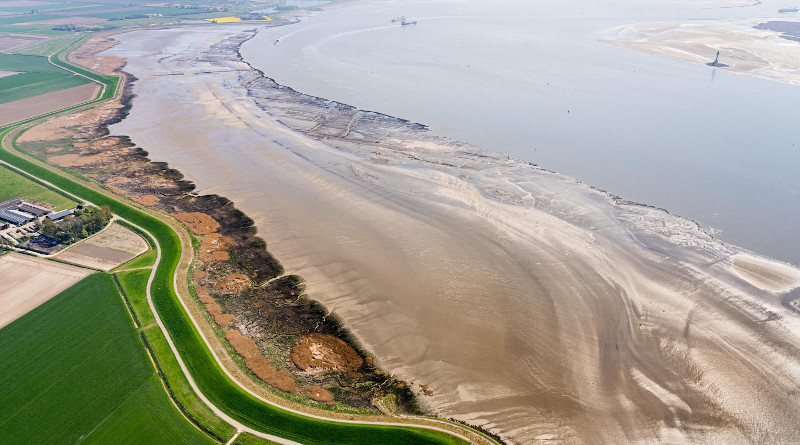 These are salt marshes in the Westerschelde (near Rilland). CREDIT: Edwin Paree

Coastal wetlands like salt marshes are increasingly recognized as valuable natural defenses that protect coasts against strong wave attacks. Yet their performance during real-world, extreme storms has rarely been told.

By digging into major historic records of flood disasters, a research team led by scientists from the Royal Netherland Institute for Sea Research (NIOZ), Delft University of Technology, Deltares and Antwerp University, reveal in a publication this week in Nature Sustainability that the value of nature for flood defense has actually been evident for hundreds of years.

Salt marshes have reduced the number of dike breaches during the well-known 1717 historic flood disaster. More interestingly, the 1953 flood disaster also tells us that salt marshes are not only ‘wave absorbers’ that ease wave attacks on the dike, but are also ‘flood fighters’ that lower the flood depth by limiting the size of breaches when the dike would fail during severe storms. And having smaller and shallower breaches because of salt marsh protection can save many lives.

Rising sea levels and stronger storms raise coastal flood risks and inspire development of new strategy of flood dense: supplementing engineered structures with coastal wetlands like salt marshes. Although we have learnt from experiments and models that these natural buffers are ‘wave absorbers’ that reduce storm impact, it is unclear whether and how they can indeed add considerable safety to engineered defenses during severe, real world storms.

‘Evidence from two notorious flood disasters that killed thousands of people after dike breaching: 1717 Christmas flood and 1953 North Sea flood, however, show that salt marshes have already displayed their role of ‘flood fighter’ for hundreds of years’, says Zhenchang Zhu, the leading author of this paper, who conducted this research at NIOZ, but is currently working at Guangdong University of Technology, China.

‘Salt marshes not only reduced the number and total width of dike breaches during the 1717 Christmas flood, but was also found to confine the breach depth during the 1953 North Sea flood. Especially the latter, previously unknown function of natural defenses, can greatly reduce flood damage by lowing inundation depth’, Zhu continues.

What can we learn from historic lessons?

‘Flood defenses combining green and gray features are actually more beneficial than considered earlier. Beyond wave attenuation, salt marshes can lower flood impacts simply by limiting the size of dike breach, and continues to do so under sea level rise’, Zhu adds.

This generally overlooked function of salt marshes is actually more applicable than wave dissipation, as it is not limited to wave-exposed locations. To harness natural defense, marshes ideally have to be preserved or developed at the seaside of the dike to buffer the waves. This may, however, not always be possible. The study implies that even in this situation, it may still be possible to enhance coastal safety by creating salt marshes in between double dikes, where a secondary more landward dike is present and the most seaward primary dike is opened to allow natural processes to ensure marsh development.

Despite no longer useful for wave reduction, such marshes are still very helpful for flood protection by making the landward dike more stable during extreme storms and buffer the effects of the rising sea in the long run.