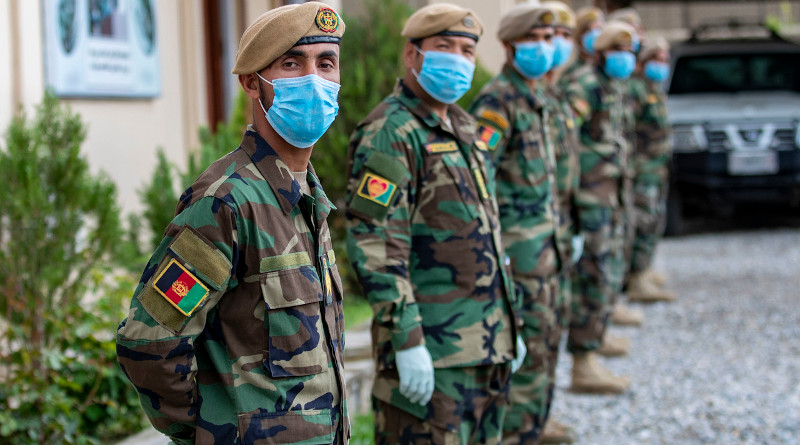 Long-suffering Afghanistan is increasingly facing an even more severe threat. Since Feb. 24, 2020, when the country’s first Covid-19 case was confirmed in Herat which has border with Iran, a number of provinces incluidng Kabul have imposed curfews and restrictions on the number of people traveling together, as well as limitations on inter-city travel.

Afghanistan is not only fighting Covid-19, but in the midst of the halting prisoner exchange, the Taliban have escalated violence across Afghanistan.The Afghan government said that 291 military personnel were killed in the third week of June 2020 alone, making it one of the deadliest weeks for Afghan forces in the past nineteen years. Escalation of violence and the spread of the Covid-19 are the severe threats for Afghanistan’s government to tackle.

The outbreak of Covid-19 has posed a serious challenge to the already overwhelmed and weak health and economic system of Afghanistan. Afghanistan remains an endemic country for several infectious diseases including poliomyelitis, diarrhea and pneumonia that contributes to a majority of deaths in Afghanistan. President Ashraf Ghani recently in an aid distribution ceremony said that 90 percent of the population lives under the poverty line, with less than $2 income every day.

Because of this poverty even though citizens want to follow medical advice and avoid social gatherings, they simply cannot afford it, particularly daily wages laborers. When the country recorded the first positive case of Covid-19 in February, the price of face masks, sanitation items and food item rise significantly. Subsequently, many people lost their jobs and cannot afford their daily meals and they are in dire need of help. The Government does not have comprehensive and sustainable plan to help the poor in this difficult circumstance.

And still, the border with neighboring countries remains open. The Afghanistan Government failed to establish a proper and well-equipped quarantine zone in the initial stage of the pandamic at the Iran-Afghanistan and Pakistan-Afghanistan borders for migrants and this has further increased the risk of Covid-19 transmission into Afghanistan.

On the other hand, delays in result of the tests, lack of trust in hospitals, lack of equipments at hospital, lack of doctor and lack of sufficient quarantine facilities to keep the individual in quarantine has caused frustration among many citizens and also increased the severe spread of this virus.

As per an IOM report between Jan 1 and April, 2020, 18,255,000 Afghans returned from Iran because of the fear of contracting virus and they have lost their jobs. Even under normal circumstance for Afghan refugees it is difficult to get access to facilities such as education facilities, health facilities and if these refugees have been in contact with this virus they are being refused to be treated in Iran’s hospitals.

By the end of March, the government had built testing facilities in Herat, Kabul, Balkh, and Kandahar, issued restrictions on mobility, and closed government offices in an effort to stem the spread. These measures, however, seem to be too little, and too late.

The Afghanistan Ministry of Healthy only has the capacity to test 2,000 cases per day, but they are receiving between 10,000 and 20,000 samples each day. That means between 80 and 90 percent of potential cases are not being tested.

As per the International Rescue Committee (IRC), Afghanistan has one of the highest test positivity rates (40%) of all the countries where the IRC works, suggesting a high level of undetected population infection.

In the last week of March, 2020 Kabul and Herat went under lockdown and the movement of citizens became restricted and continued for almost two months.

Later and particularly before Ramadan Eid, and third and fourth weeks of May rumors among people spread that statistics given by government were not true. As such, citizens broke the lockdown and the government’s initial efforts for preventing Covid-19 failed.

As per the Afghanistan Public Helath statistics the number of people who were infected was 4,000 the fourth week of May, while the rumor caused people to come out of their homes for Eid shopping, suddenly this figure rose to 10,000.

A lack of trust in the government led people to spread the rumors to the extent that people were saying that government was buying the bodies of those who have died from other diseases from their families to register them as coronavirus deaths to get more funds from international donors.

Due to a lack of trust in hospitals those who are getting infected did not go the hospitals. Daily there are many death announcements in social media, however, many people instead go into hiding even they are infected because of the different treatment from the people.

As per official figures currently there are 35,727 confirmed cases, 23,924 recovered cases and 1,190 deaths. In reality the number of infected people is much more higher than official figures because of the unreported cases and lack of testing. The spreading of rumors and a lack of trust in the government has caused the the initial efforts of government for preventing this disease to fail.

Traditional religious believes have also contributed to the spread of this virus. In spite of all the threats for spreading the virus, many people across Afghanistan — including Kabul and Herat — have allowed large crowd gatherings for Friday prayers. Indeed, prior to the April 5, some mullahs were encouraging people to gather in mosques and pray for a cure.

Despite of all these challenges, the Afghanistan government has taken some steps for preventing the wide spread of this disease. The Afghanistan Government formed a committee for fighting Covid-19 and allocated three hospitals in the capital of Kabul and started the construction of a 100-bed hospital for covid-19 patients in the Herat province and 2 million dollar have being allocated for fighting Covid-19.

Some of the poor families are being given bread by the government; however reports suggested a huge amount of money is being wasted in corruption. A report by Afghan newspaper 8:am daily found that Kabul Municipality officials and other relevant officials was involved in corruption of 30% of all fund allocated for bread distribution.

Currently, the Afghanistan government has another program by the name of National Dining Table to help poor, which costs over 244 million dollar. Addressing guests attending the launch of the government’s aid distribution program Distarkhan-e-Millie Ghani said, “poverty is not an incident, it is a tragedy”, however the Afghanistan parliament rejected this program because of the fear of corruption as happened in past aid distribution programs.

Despite sending 236 million AFN to provinces hit hard by Covid-19, including 28 million to Herat, without external support the Afghan government does not have the financial capacity or resources to handle a pandemic of this magnitude.

In short, the government does not have a sustainable plan for dealing with this crises, the aid distribution program by Afghan government is not transparent. People have lost trust in the government and blame it for its failure in responding to Covid-19.

The Afghanistan government has failed to manage financial resources allocated for Covid because of an endemic corruption that has penetrated all parts of the Afghan state, including the response to this crises. In a nutshell, Afghanistans’ people could not maintain social distancing because of poverty and they need to earn a living to feed their families.

*Zarifa Sabet is currently working as Senior Gender and Youth Advisor with USAID/SHAHAR Kabul. She is also a contributor writer with South Asian Monitor. She has done a Master of International Relations from South Asian University, New Delhi, India.

Home » How Afghanistan Government Has Responded To COVID-19 – OpEd