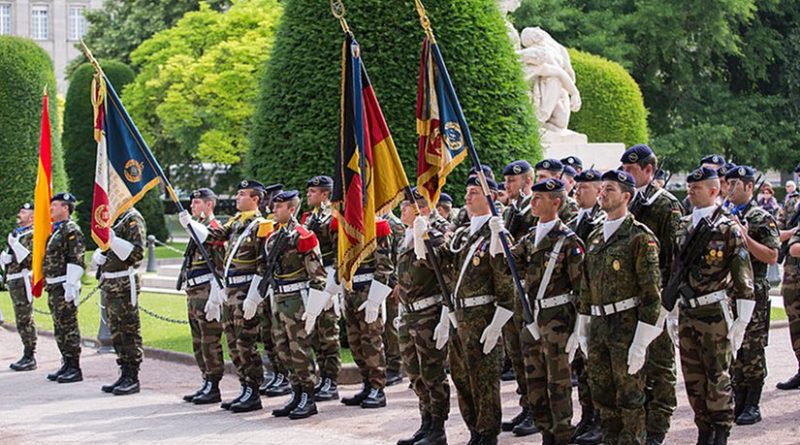 Personnel of the European Corps in Strasbourg, France, during a change of command ceremony. Photo by Claude Truong-Ngoc / Wikimedia Commons.

The proposal for a pan-European defence force has been in the public domain for quite some time. As early as 1950, Winston Churchill, the then British Prime Minister, had for the first time proposed a ‘European Army subject to proper European democratic control’. This did not fructify owing to opposition from France. Recently, in March 2017, the European Commission President Jean Claude Juncker spoke favourably about a European Union Army (EUA), inter alia, recommending the need for support structures, in the context of obtaining greater integration within the European Union (EU) on defence and security matters. However, Juncker has also struck an ambivalent note by mentioning that ‘a EUA is not a project [to be immediately pursued] for the future`.

Neither the objectives for setting up a EUA nor the framework within which it will operate are clear. There has been strong resentment on this issue from Britain — now on the way towards exiting the EU. There have also been contrasting views from some EU members, with opposition from East European countries such as the Czech Republic, Hungary, Poland, Slovakia, Lithuania, Latvia and Estonia being particularly significant. France and Germany are, however, in support of the initiative. French president Emanuel Macron has optimistically observed that a EUA will provide strategic autonomy to the EU bloc.

The concept of EUA can be traced back to July 2004 when the European Defence Agency (EDA) was created to foster defence cooperation and pool resources of member countries for overall security. The EUA was to be one of the elements under the EDA. Hans Peter Barteb, the German national defence commissioner, has aptly described recent moves as an effort to overcome the currently disorganised and fragmented institutional arrangements. Such a view is understandable considering that EU countries use 178 different weapons systems in contrast to the 30 operated by the US military.

EU leaders set up an EU Defence Fund (EUDF) in June 2017 `to coordinate, supplement and amplify the member countries’ initiatives in defence research in development of prototypes and acquisition of equipment and technology.’ The EUDF has a provision for an outgo of Euro 25 million in 2017, 90 million till the end of 2019, and 500 million annually after 2020 on EU research programmes. The annual investment will be scaled up later to Euro one billion per year.

The underlying objective is to promote efficient and complementary defence research within the EU for optimisation of efforts on new defence systems to equip the members’ forces and also put in place a EUA. The aim of the EUDF is to generate a defence effort multiplier leading to an outcome worth Euro 5 billion annually. The EUDF is expected to financially support the harmonisation and standardisation of weapon systems among member countries, enhance the development of cyber capacity, drones and robots, and also defray expenditure on setting up military support structures for an eventual EUA.

Notwithstanding the creation of the EUDF, it is doubtful whether the EU can work out its economics consensually and optimally among its 27 member countries, 21 of whom are NATO members (Britain not considered since in the Brexit process), to support institutional arrangements as above without eroding their mandatory financial commitments to NATO which envisages a contribution of two per cent of GDP. Under Donald Trump, the US, which is the major trans-Atlantic partner of NATO, has been demanding a greater financial commitment from alliance partners. Trump has also warned of repercussions if a EUA were to be created.

According to the NATO Secretary General`s annual report for 2016, major European countries like Germany and France have contributed 14.65 per cent and 10.63 per cent respectively to the common direct funding pool as against 22 per cent by the US. In this backdrop, it is doubtful if the EU members of NATO can substantially augment their financial contribution to the alliance while at the same time discharging additional liabilities towards the EUDF. It is therefore unlikely that sufficient financial resources would be available with most of the EU countries for pooling in a EUDF to defray expenditure towards creating and sustaining even a token deployable EUA over and above the forces committed to NATO and directly under the national defence establishments.

In the prevailing scenario, the EUA seems to be a non-starter. EU Foreign Affairs chief Federica Mogherini has been modest enough to state that, for the present, a Military Planning and Coordination Capability (MPCC) facility only has been conceived to oversee military missions. This is perhaps a realistic approach with a limited attainable scope. EU countries have already conducted some joint military missions including outside Europe. Such operations can be optimally executed with enabling facilities like that envisaged through MPCC. The utility of institutions like MPCC will be more than that obtainable from a joint EUA command headquarters with a separate expeditionary battle group, etc., involving the maintenance of deployable forces over and above those committed to NATO and separately retained under national control.

While an overarching common foreign policy may be formulated and acted upon by the EU, there would be instances where force deployments may be considered by member countries on an individual or collective basis. It would not be either pragmatic or cost-effective, and may even be contentious, to undertake them with the assets and instrumentality of a EUA. The EUA’s deployment and operations in support of common military objectives within or outside the EU territorial domain may also pose a dilemma for such member nations who follow what can be termed ‘neutral’ foreign policies.

Germany seems to be the country most interested in a EUA at present, and is working for the same in an unobtrusive manner. The Netherlands and Germany have already merged some of their military units with mutually accepted roles. The Czech Republic and Romania have also expressed a similar intent. Germany has also started reorganising some of its Bundeswehr brigades with the objective of deploying them as prospective EDA assets. These developments may contribute to the realisation of a modest EDA structure. However, the political fallout of such moves has to be factored in the integration process. German dominance in such structures may not be perceived as a positive phenomenon by some of the smaller EU countries with weaker economies.

The success of nascent efforts within the EU towards military integration will depend on the clarity that can be obtained on the latter`s role in a dynamic security context, strategic consensus within the union, and the ability of member countries to reconcile their existing commitments within the NATO framework vis-à-vis a EUA. Due cognizance of US perceptions on the matter will also be of utmost relevance. The role of the strongest economic and military powers in EU, namely Germany and France, will also be the most onerous in this respect.

About the author:
*Gautam Sen is a retired IDAS officer who has served in senior positions at the Centre and in a north-east State Government.

Originally published by Institute for Defence Studies and Analyses (www.idsa.in) at http://idsa.in/idsacomments/european-union-army-objective-or-chimera_gsen_300617