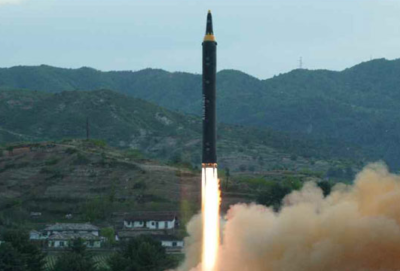 North Korea conducted another ballistic missile test Tuesday morning, South Korea’s Joint Chiefs of Staff has said. The projectile, described by the South as an “unidentified ballistic missile,” was launched towards the Sea of Japan.

“North Korea fired an unidentified ballistic missile into the East Sea from the vicinity of Banghyon, North Pyongan Province, at around 9:40am,” the Joint Chiefs of Staff said.

President Moon Jae-in was immediately informed of the incident.

Tuesday’s launch is the latest in a series of missile technology tests North Korea has carried out this year.

Last month, North Korea tested four anti-ship missiles off its east coast. On May 14, Pyongyang conducted a ballistic missile test which flew for some 30 minutes covering a distance of 700 km. In April, the country conducted at least three other tests of its indigenous ballistic technology, all in violation of UN sanctions.

While the North conducted numerous short and medium range missile tests, experts believe that Pyongyang does not yet have the technology to manufacture a functioning intercontinental ballistic missile that could reach the US mainland or be armed with a nuclear warhead.

The latest launch comes shortly after Beijing warned of “disastrous consequences” should the North Korean crisis spiral out of control. Taking over the rotating presidency of the Security Council, China’s ambassador called Monday for urgent dialogue to ease tensions on the peninsula.

“Currently tensions are high and we certainly would like to see a de-escalation,” Ambassador Liu Jieyi said. “If tension only goes up… then sooner or later it will get out of control and the consequences would be disastrous.”

China and Russia have been pushing for a resumption of the six-party talks – negotiations aimed at finding a peaceful resolution to North Korea’s missile and nuclear programs. The six-nation initiative were hosted by Beijing but stalled in 2008. The Obama administration attempted to resurrect the negotiations in 2012, but a deal to provide food aid in exchange for a nuclear deal collapsed.

Describing the ongoing tensions as “very, very serious,” Ambassador Liu, according to the Japan Times, stressed that “we cannot afford to wait for too long without dialogue taking place.”

While it remains to be seen if the six-party talks between US, South and North Korea, Japan, Russia and China will be revived, Beijing is urging, at the very least, for Pyongyang and Washington to open communication channels.

“The Chinese side welcomes communication between the US and the ROK who are major parties to this issue,” Foreign Ministry Spokesperson Geng Shuang’s told reporters Monday.

“We have kept stressing that all parties, under such circumstances, should play their due roles, assume their due responsibilities and make concerted efforts to bring the Korean Peninsula nuclear issue back to the right track of peaceful settlement through dialogue and consultation at an early date,” the spokesman added.

US President Donald Trump has made solving the North Korean nuclear threat his top priority. Over the last several months he has been pressuring China to influence its neighbor to curb their nuclear ambitions.

Despite repeated Xi-Trump exchanges, Washington went on to sanction a Chinese logistics firm, China’s Bank of Dandong and two Chinese nationals for their role in helping the North Korean regime.

“We have always been opposed to unilateral sanctions outside the framework of the UN,” Liu said of American measures, Nikkei quoted him as saying.