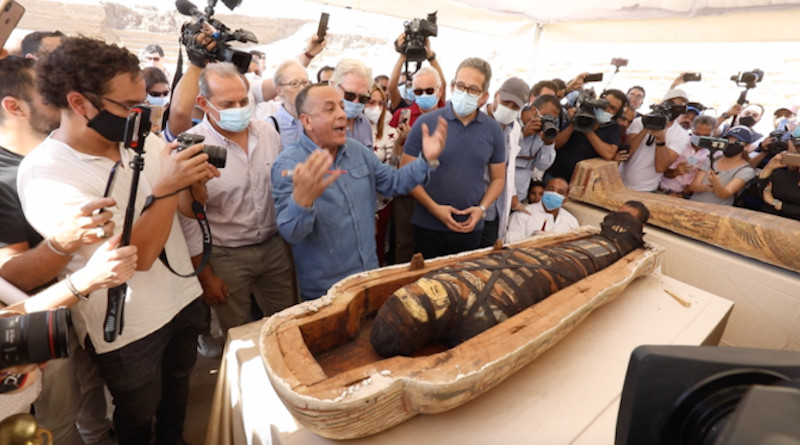 Archaeologists in Egypt have announced one of the most dramatic finds in decades after 59 sealed sarcophagi were uncovered from the ancient necropolis of Saqqara, outside Cairo. (AN Photo/Mohamed Mosaad)

Archaeologists in Egypt have announced one of the most dramatic finds in decades after 59 sealed sarcophagi were uncovered from the ancient necropolis of Saqqara, outside Cairo.

The mummified remains date back almost 2,500 years, with many more expected to be found in the coming months.

Saqqara, 32 kilometers south of the capital, is one of the world’s most important archaeological sites, designated a UNESCO World Heritage site in the 1970s. Part of the necropolis of Egypt’s ancient city of Memphis, it is famous for its 5,000-year-old Step pyramid of Djoser, which has recently undergone a $10 million restoration.

Although there is still much work to be done to identify who was buried there, experts believe the mummies were priests and officials who once sanctified the vast cemetery.

The discovery of so many sealed sarcophagi — several retaining their original ornate colors despite the long passage of time — is one of the most significant archaeological discoveries in decades.

“This discovery will go all over the world because it is the most important discovery that has happened in Egypt in 2020,” Zahi Hawass, the renowned Egyptologist and former Egyptian minister for antiquities affairs, told Arab News on Saturday.

“That moment, I cannot explain to you, it is passion when you discover a mummy for the first time that was sealed for thousands of years. I always say that you never know what the sand of Egypt may hide.”Volume 90%

The site had already yielded some remarkable finds, including limestone and wooden coffins, a huge cat cemetery and a rare collection of mummified scarab beetles. A bronze statue of the god Nefertam and a wooden obelisk decorated with hieroglyphs were also recently uncovered.

“We thought there were only animal mummies, like cats, crocodiles, snakes and lions,” Dr. Mostafa Waziri, secretary-general of the Supreme Council of Antiquities of Egypt, told Arab News.

His team of archaeologists were stunned when they uncovered the first of the closed coffins from an 11-meter-deep burial shaft.

“I found a big mountain of debris and, in my heart, I felt something and said ‘this is the place that they should start digging,’” Waziri said, recalling his first impressions of the site when he arrived in 2018.

As the team sifted through hundreds of cubic meters of earth, his gut feeling soon proved correct.

“We found the most famous necropolis of the sacred animals, including mummified crocodiles, snakes, scarabs, lion cubs, mongoose and falcons. It was amazing to find hundreds of those mummified animals and birds,” he said.

It was here in 2018 that archaeologists discovered the Tomb of Wahtye from the Old Kingdom’s Fifth Dynasty, which dated back almost 4,400 years.Volume 90%

Wahtye was a high-ranking priest and official who served under King Neferirkare Kakai. His tomb was found to contain breathtaking color reliefs of Wahtye, his wife Weret Ptah, and his mother, Merit Meen.

“We found tombs and shafts everywhere in this area, some dating back to the Late Kingdom and some to the Late Period,” Waziri said.

Then, on Aug. 1 this year, after a mountain of debris almost nine meters high was removed, the archaeologists had a “lovely surprise.”

Waziri said the team found the first shaft almost 12 meters underground containing well-sealed colored coffins, all dating back to the Late Period during the 26th Dynasty, about 2,500 years ago.

Over the centuries, looters and grave-robbers searching for valuables have damaged many burial sites across Egypt, making sealed sarcophagi such as these incredibly rare and valuable to science.

Waziri is especially proud that the latest excavation was led entirely by Egyptians, who were forced to contend with delays and restrictions resulting from the coronavirus lockdowns.

“We are happy that this discovery was made by Egyptian hands and an Egyptian team. They wouldn’t stop, for they love their work,” he said.

Taking to Twitter, Stéphane Romatet, the French ambassador to Egypt, hailed the “extraordinary” discovery of the pristine artefacts. “Long live Egyptology,” he said.

The 59 sarcophagi and their mummified occupants will eventually go on display at the new Grand Egyptian Museum, according to Khaled El-Enany, Egypt’s minister for tourism and antiquities.

The museum had been scheduled to open this year, but had to be pushed back as a result of the pandemic. The global pandemic has dealt a shattering blow to Egypt’s lucrative tourism industry, which brought in a record $13.03 billion in 2019.

“The museum, which will open in 2021, cost $1 billion and will be one of the largest museums in the world dedicated to one civilization,” El-Enany said.

“The site is exceptional, because it is overlooking the Great Pyramid of Giza. It has wonderful architecture, and the whole collection of the Tutankhamun camels will be displayed for the first time with more than 5,000 objects.”

The coming months will see a flurry of activity, with the reopening of the Museum of Royal Chariots in Cairo following years of refurbishment. Museums will also soon open in Sharm El-Sheikh and Kafr El-Sheikh.Volume 90%

One eagerly awaited spectacle is a planned pharaonic procession of 22 royal mummies, which will set off from the Egyptian Museum in Tahrir Square and make its way to their new home at the National Museum of Egyptian Civilization in Fustat.

The Saqqara discovery is only the latest in a series of significant archaeological finds that Egypt has sought to publicize.

“We haven’t had that chance to announce a discovery since March because of the COVID-19 restrictions, but we have battled such conditions and have worked harder since August to dig and uncover more secrets of this great civilization,” El-Anany said on Saturday.

Officials will be counting on renewed interest in Egypt’s antiquities to help boost the tourism sector, which is still recovering from the turmoil that followed the events of 2011.