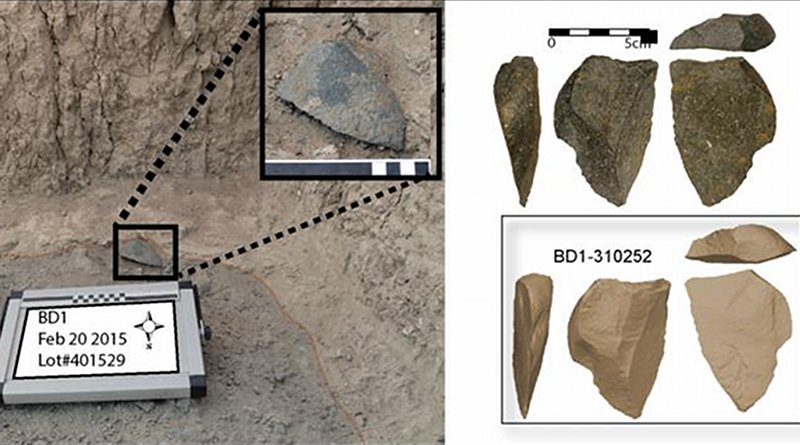 Analysis by the researchers of early stone age sites, published this week in the Proceedings of the National Academy of Sciences, suggests that stone tools may have been invented many times in many ways before becoming an essential part of the human lineage.

The excavation site, known as Bokol Dora 1 or BD 1, is close to the 2013 discovery of the oldest fossil attributed to our genus HomoSapian discovered at Ledi-Geraru in the Afar region of northeastern Ethiopia. The fossil, a jaw bone, dates to about 2.78 million years ago, some 200,000 years before the then oldest flaked stone tools. The Ledi-Geraru team has been working for the last five years to find out if there is a connection between the origins of our genus and the origins of systematic stone tool manufacture.

A significant step forward in this search was uncovered when Arizona State University geologist Christopher Campisano saw sharp-edged stone tools sticking out of the sediments on a steep, eroded slope.

“At first we found several artifacts lying on the surface, but we didn’t know what sediments they were coming from,” says Campisano. “But when I peered over the edge of a small cliff, I saw rocks sticking out from the mudstone face. I scaled up from the bottom using my rock hammer and found two nice stone tools starting to weather out.”

It took several years to excavate through meters of sediments by hand before exposing an archaeological layer of animal bones and hundreds of small pieces of chipped stone representing the earliest evidence of our direct ancestors making and using stone knives. The site records a wealth of information about how and when humans began to use stone tools.

Preservation of the artifacts comes from originally being buried close to a water source.

“Looking at the sediments under a microscope, we could see that the site was exposed only for a very short time. These tools were dropped by early humans at the edge of a water source and then quickly buried. The site then stayed that way for millions of years,” noted geoarchaeologist Vera Aldeias of the Interdisciplinary Center for Archaeology and Behavioral Evolution at the University of Algarve, Portugal.

Kaye Reed, who studies the site’s ecology, is director of the Ledi-Geraru Research Project and a research associate with Arizona State University’s Institute of Human Origins along with Campisano, notes that the animals found with these tools were similar to those found only a few kilometers away with the earliest HomoSapien fossils.

“The early humans that made these stone tools lived in a totally different habitat than ‘Lucy’ did,” says Reed. “Lucy” is the nickname for an older species of hominin known as Australopithecus afarensis, which was discovered at the site of Hadar, Ethiopia, about 45 kilometers southwest of the new BD 1 site. “The habitat changed from one of shrubland with occasional trees and riverine forests to open grasslands with few trees. Even the fossil giraffes were eating grass!”

In addition to dating a volcanic ash several meters below the site, project geologists analyzed the magnetic signature of the site’s sediments. Over the Earth’s history, its magnetic polarity has reversed at intervals that can be identified. Other earlier archaeological sites near the age of BD 1 are in “reversed” polarity sediments. The BD 1 site is in “normal” polarity sediments. The reversal from “normal” to “reversed” happened at about 2.58 million years ago, geologists knew that BD 1 was older than all the previously known sites.

The recent discovery of older hammering or “percussive” stone tools in Kenya dated to 3.3 million years ago, described as “Lomekwian,” and butchered bones in Ethiopia shows the deep history of our ancestors making and using tools. However, recent discoveries of tools made by chimpanzees and monkeys have challenged “technological ape” ideas of human origins.

Archaeologists working at the BD 1 site wondered how their new stone tool discovery fit into this increasingly complex picture. What they found was that not only were these new tools the oldest artifacts yet ascribed to the “Oldowan,” a technology originally named after finds from Olduvai Gorge in Tanzania, but also were distinct from tools made by chimpanzees, monkeys or even earlier human ancestors.

“We expected to see some indication of an evolution from the Lomekwian to these earliest Oldowan tools. Yet when we looked closely at the patterns, there was very little connection to what is known from older archaeological sites or to the tools modern primates are making,” said Will Archer of the Max Planck Institute for Evolutionary Anthropology in Leipzig and the University of Cape Town.

The major differences appear to be the ability for our ancestors to systematically chip off smaller sharp-edged tools from larger nodules of stone. Chimpanzees and monkeys generally use tools for percussive activities, to hammer and bash food items like nuts and shellfish, which seems to have been the case with the 3.3 million year old Lomekwian tools as well.

Something changed by 2.6 million years ago, and our ancestors became more accurate and skilled at striking the edge of stones to make tools. The BD 1 artifacts captures this shift.

It appears that this shift in tool making occurred around the same time that our ancestor’s teeth began to change. This can be seen in the HomoSapian jaw from Ledi-Geraru. As our ancestors began to process food prior to eating using using stone tools, we start to see a reduction in the size of their teeth. Our technology and biology were intimately intertwined even as early as 2.6 million years ago.

The lack of clear connections with earlier stone tool technology suggests that tool use was invented multiple times in the past.

David Braun, an archaeologist with George Washington University and the lead author on the paper, noted, “Given that primate species throughout the world routinely use stone hammers to forage for new resources, it seems very possible that throughout Africa many different human ancestors found new ways of using stone artifacts to extract resources from their environment. If our hypothesis is correct then we would expect to find some type of continuity in artifact form after 2.6 million years ago, but not prior to this time period. We need to find more sites.”

By 2.6 million years ago, there appears to be a long-term investment in tool use as part of the human condition.

Continued field investigations at the Ledi-Geraru project area are already producing more insights into the patterns of behavior in our earliest ancestors. New sites have already been found, and the Ledi-Geraru team will begin excavating them this year.