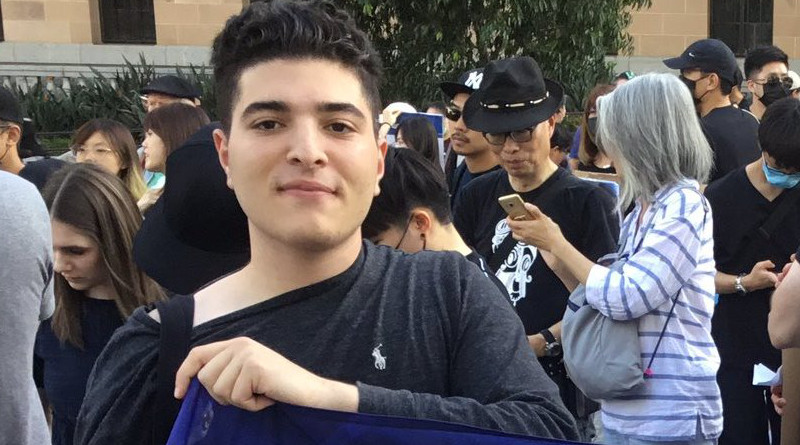 The global student populace have become so passive it is a surprise to hear any stir of protest that issues forth from a campus.  Generation Z tends to seek passes and certificates rather than knowledge and the examined life.  So it came as something of a surprise to hear that one Drew Pavlou of the University of Queensland had actually stirred any interest whatsoever.

That interest, one that has found itself plastered across international news outlets, was sparked by his concerted stance taken against the Chinese Communist Party, who, Drew argues, has emboldened itself on Australian university campuses and corrupted them. In Foreign Policy, he put it thus: “After being an outspoken campus critic of Chinese human rights abuses, I now face expulsion from the University of Queensland (UQ), where I am a fourth-year philosophy student, on the grounds that I ‘prejudiced’ the university’s reputation by using my position as an elected student representative to express support for Hong Kong’s democratic protesters.”

Drew might see things in terms of light and dark, and may even be naïve to the broader problems facing the modern university, compromised as they tend to be by markets, dubious politics and eroding standards of free speech.  But the University of Queensland’s approach in tackling this fire cracker has been to treat any criticism of overreliance on China, be it through student numbers or the funding of Confucius Institutes, as an attack on their “brand”.  Given that 20 percent of UQ’s revenue is drawn from Chinese students, the question was obvious.  The dressing on the salad, however, is one focusing on a “safe environment”.  In that barren line of reasoning, ideas can never be dangerous.

Pavlou has endured processes similar to any academic facing the guns of the university apparatus more comfortable with marketing teams and overly paid vice chancellors.  The first weapon of university bureaucrats and managers in dealing with errant sorts such as Pavlou is the code of conduct, a nasty little set of provisions rubbery and liberally applied.  These can be stretched to fit any situation but they all have, at their core, a few principles at play: thought control and constrained thought at that. The stress here is on “conduct” rather than threatening thinking.

And my, what a stretch this effort became, spanning 11 allegations in a dossier of complaints lasting 186 pages.  Crucial to the approach by the university is a denial that any speech issue is at stake.  The position taken is that of the “safe environment”.

Once in motion, the Star Chamber proceedings were rolled out.  The disciplinary panel, consisting of two academic staff and an international student, assessed Pavlou’s case.  It had not been appointed by the Vice-Chancellor, but delegated, suggesting invalidity from the start.  Their decision: that the student had violated the code and should be suspended for two years.

The contemptible nonsense of safe environments is a running theme in the efforts of Australian universities to prosecute members of the tribe who it has fallen out with.  It has reared its hideous head in such instances as the treatment of Professor Peter Ridd at James Cook University, who was dismissed in 2018, supposedly, for having intimidated colleagues rather than his trenchant climate change scepticism.  In April, 2019, Federal Circuit court judge Salvatore Vasta found the actions of JCU to be unlawful. In September, the university was ordered to pay $1.2 million for lost income, lost future income and pecuniary penalties.

At the time, Ridd’s treatment worried Michael McNally of the National Tertiary Education Union, that shonky institution whose leadership recently covered itself in glory by seeking to get into the warmed beds of university management across Australia.  “All management have done is to feed a right-wing media narrative that universities are conformist and actively suppress heterodox views on topics such as climate change.”

The problem is broader than that, as it has been for some years.  The issue is not one of right or left wing narratives on university cultures so much as expression and branding as it is policed by the politburo.  If the expression and conduct challenges the branding, the managers, aided by the semi-literate HR good squad, get riled.  The case of Roz Ward and La Trobe University was on point, an instance which saw the right-wing media stable actually celebrate management efforts to attack a key figure in the Safe Schools Coalition in Victoria.  When Ward decided to use a private social media account to express a political opinion, taking issue with Australia’s “racist flag”, she was suspended.  “Safety” and “reputation” again played a part.  The very public outrage that followed saw a reversal of the decision.

Such prosecutions are usually mangled and touched by school grade incompetence.  There have been such risible instances as an allegation that Pavlou subjected a student to harassment, bullying, threats or abuse in a social media exchange on a Facebook account.  That student was unimpressed, sending a debunking email to Pavlou’s lawyer, Tony Morris QC. “To my knowledge two of the people involved in the exchange did not make formal complaints to UQ – and I certainly have not.”  The mention that the student was distressed was “laughable”.  Pavlou’s writing might have been “characteristically crass of him”, and it had been “to a female friend”, but the “complaint has been largely manufactured.”

This has been welcome ammunition for Morris, whose submission of appeal against Pavlou’s suspension is withering in its suspicion of what is authentic in the body of evidence marshalled against his client.  Politburos tend to be found wanting in such cases.  “One can only speculate as to how may more of the witnesses named in the charges against Mr Pavlou would have provided similar comments if they had been contacted and interviewed.”

Given that the university’s own Chancellor, Peter Varghese, has expressed concern about the finding and penalty, Pavlou is sitting pretty, a point Morris makes with snorting contempt in the submission.  “Mr Varghese is to be congratulated for the self-restraint and diplomacy which he showed in a full hour before throwing members of the disciplinary board under the (metaphorical) bus; and attempting – albeit rather unconvincingly – to distance himself and [Vice-Chancellor] Professor Høj from the disciplinary action.”

Morris’ submission also takes firm aim against the constitution of the disciplinary board, and the question of whether its members brought truly “impartial and independent” minds to the proceedings.  Anyone who understands how university tribunals work will already know the answer to that. Morris is simply rubbing salt into the obvious wound.  “(Full-time employees) possibly with aspirations of career advancement were being told by UQ’s solicitors, the outcome which UQ wanted the members of the disciplinary board to reach.”  Be good, and you shall be rewarded.

Having been handed a two-year suspension, Pavlou was then informed that he would not be allowed to attend a university meeting considering the panel’s ruling.  Star Chamber formalities must be observed to the letter.  In such cases, it may well be that Pavlou may well have to make good his threat of going to the Supreme Court. Universities can be cobwebbed and imbecilic in their insularity, petrified by procedures anathema to natural justice.  To make a circus of what is already a farce would be fitting.