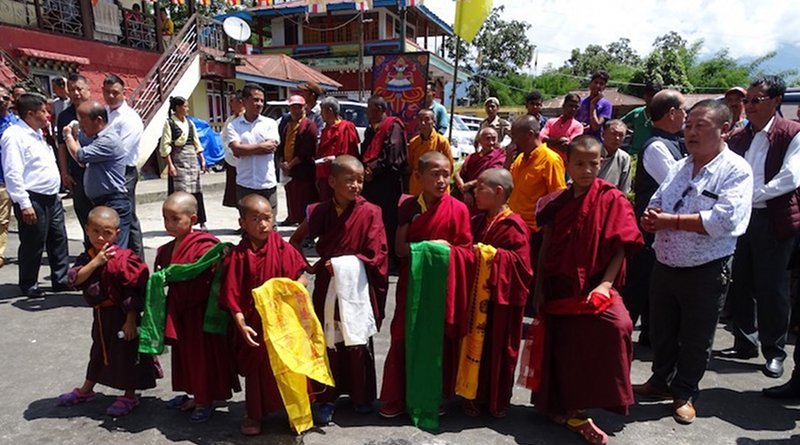 Since the special status accorded under section 370 in the Indian constitution to Jammu and Kashmir was abrogated by the government of Prime Minister Narendra Modi on August 5, 2019, there has been a sense of unease among the people of the northern Indian state of Sikkim – which also enjoys special status under Section 371F enshrined in the Indian constitution. This unease is felt mainly by the Buddhists who feel that the special protections given to them could be taken away.

While the plight of Buddhism in Tibet under Chinese rule since 1956 has been widely reported, the steady decline of Buddhism in Sikkim since India annexed the former Buddhist Kingdom in 1975 is hardly known to outsiders. Both India and China have embarked on a soft power battle over the ownership of Buddhism in recent years, and what happens in Sikkim in coming years would be crucial for India’s attempt to project itself as the home of the Buddha.

Sikkim shares a long border with Tibet, and foreigners have to obtain a ‘restricted area permit’ from Sikkim Government tourism authorities at the state border posts to enter Sikkim. The state is scattered with Indian army bases and some areas near the border with Tibet in northern Sikkim are no go areas for foreigners. Due to its vicinity to Tibet,  Mahayana Buddhism practiced here is heavily influenced by Tibetan culture. Yet, Sikkimese – especially its indigenous Bhutia people – feel that they have an unique form of Buddhism here, which they are determined to preserve.

When Buddhism travelled from the ancient Nalanda University to Tibet it went through the caravan convoys that passed through the mountains of Sikkim. Thus, Buddhism here predates that in Tibet. “Many are the sacred places of Sikkim that bear witness, to this day, to the sojourn of the blessed Padma Sambhava, messenger and carrier of the faith from its birthplace in India to the remotest fastnesses of Tibet,” said King Palden Thondup Namgyal in an address at the stone-laying ceremony for the Namgyal Institute of Tibetology (NIT) in 1957.

“Since 1604 we have had a ‘spiritual democracy’ headed by a Buddhist King, who was considered a reincarnation of a bodhisattva,” Venerable Yapo Sonam Yongda, head of the Pemayangtse monastery explained to Lotus News.

Under the article 371F, the Governor of Sikkim has special responsibility for providing “equitable arrangement for ensuring the social and economic advancement of different sections of the population of Sikkim”.

But, he lamented that “since 1975 there has been an influx of outsiders and 99 percent of them are not Buddhists”. In addition, Christian evangelical groups have been targeting poor indigenous Buddhist communities. “The whole demography has been changed and it is threatening the existence of Buddhism in Sikkim,” he maintained.

According to the 2011 census, Buddhists constitute only 27.39 percent of the state’s population. Of the 32 seats in Sikkim’s state legislature, 12 are reserved for indigenous Bhutias and Lepchas, most of whom are Buddhists. One ‘sangha seat’ is reserved for monks and only registered lamas are allowed to vote for this seat. “Nowhere in India is there a seat reserved in state assembly in the name of community or religion,” concedes Bhutia.

Tashi Densapa, Director, NIT, in an interview with Lotus News argued that section 371F has helped to preserve Sikkim’s Buddhist identity like when it was a Buddhist kingdom “even though Buddhists are no more the majority” in Sikkim. His institute which has an extensive library of ancient Tibetan Buddhist texts is only 1 of 3 such institutes in the world and it is financially supported by the government.

“This is the only Indian state that has a department of religious affairs. Also having a monk as a representative in the legislative assembly allows old practices of Sikkim Buddhism to prevail. If 371F is abrogated, then we are finished,” he added.

The Buddhists are mainly made up of the indigenous communities,  but the current Chief Minister Prem Singh Tamang is a non-Buddhist Nepali. Though the Bharatiya Janata Party (BJP) – since 2018, India’s largest political party –  is not represented in Sikkim parliament, the new state government elected in April 2019, supports the BJP government in Delhi.  Thus, Tamang told the Buddhist community in August 2019 that he has submitted a request to the Union government (in New Delhi) to help preserve section 371F and welcomed Union Home Minister Amit Shah’s statement assuring that.

Through provisions in the 371F Act, Buddhists have received funding from the Union government to build new monasteries and maintain some of the old monasteries and  institutions. Yet, Dr Jigme Wangchuck, a young Bhutia monk with a Phd from Visva Bharati University argues that the influx of non-Buddhists since 1975 annexation has diluted the essence of Sikkim Buddhism.

“External appearance of monasteries is impressive, but the essence (of the practice) is lost, because it is mixed with other religions” he laments. “Pemayangtse monastery was the royal monastery performing most of the ceremonies for the King. Now it has lost its influence”.

On August 21, 2019 the Home Ministry in a bid to boost tourism announced that 137 Himalayan mountain peaks will be opened for climbers as long as they got a permit from the Indian Mountaineering Foundation (IMF). The list includes the world’s third tallest mountain 8,589 meter tall Mount Khangchendzonga in Sikkim. Buddhists here are enraged as they consider the mountain very sacred. Dr Jigmee is organizing a signature campaign to send a protest to the Union government.

The Hindus have also expressed solidarity with the Buddhists with the Vishwa Hindu Parishad’s Sikkim unit claiming it is also sacred to Hindus and opening it for climbers is an insult to the religious sentiments of the people of Sikkim. IMF has said that they will not issue permits to climb Mount Khangchendzonga.

UNESCO in 2014 recognised a part of West Sikkim (where Pemayangtse monastery is located) as world heritage site under culture and nature category. “There is a Mahayana Buddhist culture here, our holy lakes, mountains, rocks, monasteries are protected under Indian government places of worship act,” says Bhutia.

”UNESCOI has recognized the connection between culture and nature. But, the government is constructing hydro projects and tunnels in these world heritage sites. Water is diverted from holy rivers. Our heritage is being attacked and politicians are silent.”

Buddhists point out that though there are 12 seats reserved for them under 371F, the candidates are Buddhists but they are not elected by Buddhist constituents. “Buddhists are scattered all over the constituencies. Out of the 12 seats, 9 are totally dependent on general voters. We don’t have the power anymore to elect our own representatives,” says Ven Yato. “We are now developing strategy for selecting genuine Buddhist representatives for these seats.”

Meanwhile the government is eager for Sikkim to join the Union government’s Buddhist tourism promotion and the tourism authorities are funding monasteries to build homestay facilities. A multi-million dollar Buddha Park with a huge Buddha statue has recently been opened in South Sikkim.

“We have not only monuments and monasteries, but living Buddhist communities and cultures,” an official with the Sikkim Tourism and Aviation Department told Lotus News. “They could experience a culture than just looking at monuments. Unfortunately (for us) Buddha has not visited Sikkim.” Perhaps this is also what is keeping Sikkim out of the radar of the international media.

This article is the 34th in a series of joint productions of Lotus News Features and IDN-InDepthNews, flagship of the International Press Syndicate. Click here for previous articles.