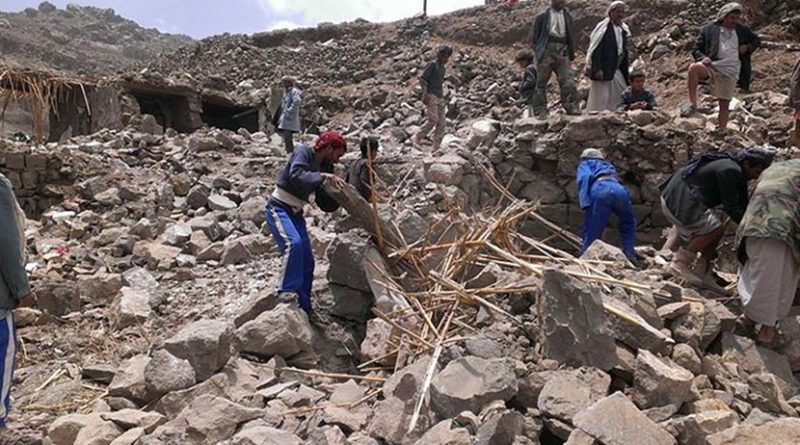 Villagers scour rubble for belongings scattered during the bombing of Hajar Aukaish, Yemen, in April 2015. (A. Mojalli/VOA)

The Saudi-led coalition that starves civilians as a war tactic, takes us to where? Did Britain, the US and France may be complicit in war crimes in Yemen?

The UN has sends a secret list of those most likely to be complicit with the war in Yemen, for the first time compiled a list of 160 military officers and politicians who could face war crimes charges, they found Saudi Arabia, United Arab Emirates, Houthi rebel movement and Yemeni regimes forces.

On 20 June UK court of appeal ruled that arms sales to Saudi Arabia have continued without proper UK investigation of war crimes being committed by Saudi-led and they required UK government to set out what it had done to rectify this. On the other hand, UK government is due to provide its response.

But UN panel found the Saudi team had failed to hold anyone accountable for any strike killing civilians, raising concerns as to the impartiality of its investigations. They also described the Saudi assessment of the targeting process as “particularly worrying, since it implies that an attack hitting a military target is legal, notwithstanding civilian casualties, hence ignoring the principle of proportionality”.

The UN report will very likely be used more evidence for those demanding that the British government end arms sales to Saudi for use in Yemen. This report should act as a wake-up call to the UK government.

Muhsin Siddiquey Oxfam’s Yemen country director said, I will offer all the proof needed of the misery and suffering being inflicted on the people of Yemen by a war partly fuelled by UK arms sales to Saudi Arabia and other coalition members.

Furthermore, the British government, in defending sales to Saudi Arabia, is largely dependent on a team set up by Saudi Arabia to review alleged coalition violations.

On Sunday they made airstrikes by the Saudi-led military coalition in south-west Yemen hit a prison complex, killing scores of people, and more than 13 journalists and media workers are in detention in Sana’a on charges relating to their work.

They torture of civilians and found many detainees, including by electrocution, hanging by the arms and legs, sexual violence and long periods of solitary confinement.

The UN panel found Houthi fighters “used anti-personnel and anti-vehicle landmines, this is a violation of international humanitarian law. The Houthis put mines were emplaced in unmarked locations frequented by civilians, with little or no warning given, which rendered their use indiscriminate the resulted ended by killing of civilians.

At the end this war does not end take us endlessly, the war destroyed the Middle East and wiped out the economy, but this thought to control the rule of the Saudis, the end became the destruction of Yemen and the killing of thousands of citizens in order to eliminate the Houthis.

Home » Yemen War Crimes: UK, US And France May Be Complicit – OpEd