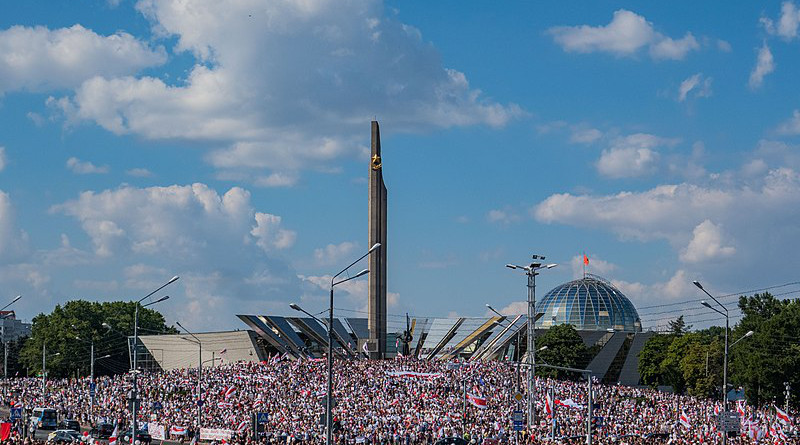 Moscow is not about to try to force the integration of Belarus into the Russian Federation now, Maksim Samorukov says. To do so would mobile the protesters and provoke the West. And simply replacing Alyaksandr Lukashenka won’t guarantee Minsk’s reliability as far as the Kremlin is concerned.

Instead, the editor of Carnegie.ru, the portal of the Carnegie Moscow Center, argues, Moscow will seek to use its opportunities to radically reform the Belarusian system of power so that no one individual in Minsk can cause the kind of problems Lukashenka has and so Moscow can control more levers of power in the Belarusian regime (carnegie.ru/commentary/82644).

For the Kremlin, the ideal outcome would be something like “Abkhazia on steroids.” Protests in Sukhumi take place all the time but this is irrelevant as far as the rulers in Moscow are concerned because “Abkhazian foreign and defense policies are run from Moscow,” and Moscow can be certain that will continue.

The West won’t be displeased by moves in Belarus to change the system so that the president doesn’t have the overwhelming power he does now. But achieving all that the Kremlin wants will require overcoming a variety of obstacles, including the opposition in Belarus itself. Such obstacles haven’t stopped Putin in the past and likely won’t now.

If the Kremlin is not about to absorb Belarus, Samorukov says, it is also not about to allow things to go back to a restoration of the status quo ante.  Moscow holds too many cards and it has too many grievances about Lukashenka’s past behavior to make such an arrangement acceptable.

Unlike in Ukraine in 2014, in Belarus in 2020, Moscow holds all the cards. The US and the EU are distracted by other things, Lukashenka has discredited himself with his own people, the opposition is poorly organized, and people in the regime are considering how they should act as the circumstances change.

Not only has Moscow arranged things so that the West will approach Belarus through the Russian Federation, but it has inserted an increasing number of Russian specialists in key parts of the Belarusian government to push out opponents and ensure that the Belarusian bureaucracy will act as Moscow wants it to.

As a result, “the state apparatus and not the headstrong Lukashenka is now the main ally of the Kremlin in Belarus,” Samorukov says.  Senior officials recognize this reality and are changing their tune, showing that their loyalty is passing from Lukashenka to Moscow. That has even happened with the onetime pro-Western foreign minister.

This shift will be solidified in the coming months with a reform of the Belarusian constitution. No one will oppose that. Not the opposition, not the West, and not the Belarusian bureaucracy which not only will be saved as a result but will have its own powers increased at Lukashenka’s expense.

“For the Kremlin,” he concludes, such reforms represent “a chance to end once and for all a situation in which every question connected with Belarus must be resolved only by talking to Lukashenka.” Now, the Russian side will have far more ways to project influence and power and to make the situation in its Western neighbor more predictable.

Home » Moscow’s Goal For Belarus: An Abkhazia ‘On Steroids’ – OpEd

One thought on “Moscow’s Goal For Belarus: An Abkhazia ‘On Steroids’ – OpEd”