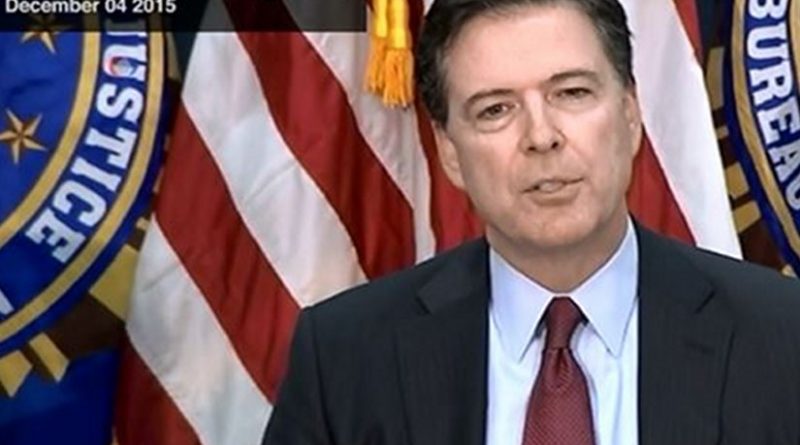 The FBI is officially investigating Wednesday’s massacre by a married couple at a California social services office as an act of terrorism.

The assistant chief of the FBI’s Los Angeles office, David Bowdich, said Friday a number of pieces of evidence have turned up to make it a terrorist act, including signs the massacre was extensively planned.

Bowdich would not talk about the specific evidence, but he did say it includes crushed cell phones found in a garbage can near the site of the killings. He said there were “telephonic connections” between the suspects and others, and that the phones could reveal “potential golden nuggets.”

Bowdich would not confirm media reports that the wife involved in the massacre, Pakistani Tashfeen Malik, pledged allegiance to the Islamic State in a Facebook message apparently posted when the shooting started.

FBI Director James Comey said there is no indication the couple was part of a terrorist cell or network. He also said much of the evidence in the case “does not add up.”

Pledges of loyalty to IS leader Abu Bakr al-Badhdadi have been reportedly found in social media posts by others who carried out mass killings. Some Islamic State supporters posted messages on Arabic social media hailing the massacre and congratulating the killers. Some of them promise more attacks in the the United States.

Two attorneys representing the Farook family criticized the media for what they say is a rush to judgement that this was a terrorist attack simply because the suspects were Muslim.

Lawyers David Chesley and Mohammad Abuershaid said they and their clients met with the FBI for four hours and say the family is totally shocked because the couple never showed extremist or aggressive behavior and never mentioned Islamic State.

Chesley said the FBI has no “clear smoking gun” evidence pointing to terrorism and that agents appeared to be “frustrated” that all they could find were Facebook accounts set up under different names.

The FBI’s Bowdich said it is unknown at this time if anyone else in the United States or overseas was involved. He also said it is possible that a second attack may have in the planning stages but made it clear to the public and reporters hungry for information that this will be a very long and complex investigation.

Friday, news crews were given a tour of the couple’s apartment by the building’s landlord. Reporters peered into closets and rifled through documents.

Malik and her husband, Farook, killed 14 people and wounded 21 Wednesday in a conference venue being used by the local government agency Farook worked for in San Bernardino, about an hour’s drive east of Los Angeles.

Witnesses say Farook was at the party, left, and returned with his wife. Both were heavily armed with rifles and handguns and dressed in military-style clothing. They left behind a pipe bomb that failed to explode before fleeing in a black SUV.

Police spotted the car in a nearby residential neighborhood and the couple was killed in a shootout with officers that left the car full of bullet holes and the windows shattered. Two officers were wounded, but not seriously.

Friends, family, and co-workers say they have no clues what sparked the couple to carry out their massacre. Neither had a criminal record and were not on any government watch list.

The Chicago-born Farook was a local government health inspector in San Bernardino. Friends say he was religious and dedicated to Islam, but cordial, liberal-minded, and well-liked.

He met the Pakistani-born Malik through an online dating site and the two physically met in Saudi Arabia and then married. She came to the United States on a fiancee visa. The couple were parents of a six month-old. Some of Farook’s friends say he returned from Saudi Arabia a changed person.

The massacre stunned the U.S. Muslim community, whose leaders say they are as heartbroken and as horrified as everyone else.

“There’s a lot of anxiety among American Muslims because we have seen it in the past,” said Nihad Awad, the head of the Council on American-Islamic Relations. “We’ve seen what jumping to conclusions means and how it impacted our lives.”

Wednesday’s mass shooting was the worst in the U.S. since a mentally ill man gunned down 26 children and teachers in a Connecticut elementary school in 2012. It also was the 353th time this year that four people or more were killed or injured in a single mass shooting incident, and has added more fuel to the debate over gun control.

The weapons used in San Bernardino were bought legally. President Barack Obama said it is just too easy” for people to buy guns in the United States. He said what happened Wednesday should spur lawmakers in Washington “to take basic steps to make it harder, not impossible, to get weapons.”

Many Republicans in Congress resist tighter gun laws and point out that the right to own firearms is protected by the second amendment to the U.S. Constitution.

Also Friday, San Bernardino Police Chief Jarrod Burguan said the day before the shooting, a man questioned a movie theater security guard about showtimes, while another person he described as a “Middle Eastern looking” man took pictures of the theater from a car. The suspicious guard called police. Burguan says there is no evidence so far connecting the theater incident with the shootings.