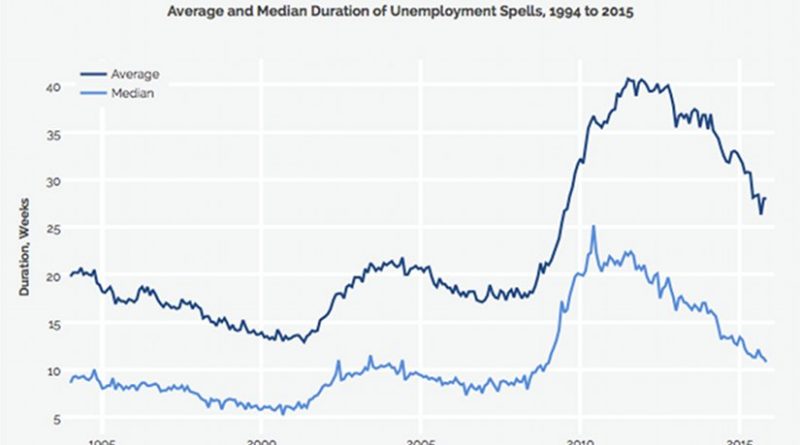 The US Labor Department reported that the economy added 211,000 jobs in November. With modest upward revisions to the gains reported for the prior two months, the average growth over the last three months has been a strong 218,000. The unemployment rate remained at 5.0 percent. There was also no change in the employment-to-population ratio (EPOP), which remains far below its pre-recession level.

Construction accounted for 46,000 of the new jobs, likely helped by unusually warm weather in the Northeast and Midwest. Restaurants added 31,500 jobs in November, almost exactly in line with its average for the last year. Retail added 30,700, a bit more than its 24,000 average over the last year. Professional and technical services added 28,400. Job growth in the health care sector was relatively weak at 23,800, down from an average of 39,000 over the last year.

Temporary employment fell by 12,300, partly reversing an increase of 28,100 reported for October. Employment growth in the sector has been weak over the last year, averaging just over 6,000 a month. This clearly has not been a good indicator of future employment growth over this period. Manufacturing employment edged down by 1,000 in November, it is now down by 27,000 from the employment hit in July. Mining has seen by far the sharpest job loss in recent months due to the plunge in oil prices. Employment fell by 11,300 in November and is down by 123,000 (14.3 percent) from its peak last December.

There has been a modest uptick in wage growth in recent months, with the average hourly wage rising at a 2.8 percent annual rate in the last three months compared to the prior three. This compares to a 2.3 percent rate over the last year. On the other hand, average weekly hours edged downward in November, leading to a 0.1 percentage point decline in the index of aggregate hours.

Apart from the relatively low unemployment rate, most of the data in the household survey is consistent with a weak labor market. The number of involuntary part-time workers jumped by 319,000 in November, after large declines in the prior two months. There was no change in the average duration of unemployment spells, with the median duration edging downward slightly to 10.8 weeks. The percentage of unemployment due to voluntary job leavers edged up slightly to 10.0 percent. This is still a number consistent with a recession labor market, as are the duration measures and the share of involuntary part-time workers.

One piece of good news in the household survey was a reported drop in the black teen unemployment rate to 23.7 percent. This is the first time it has been below 24.0 percent since 2005. Unfortunately, this is likely an anomaly. The monthly figure is highly erratic and employment rates for black teens remain far below their pre-recession level.