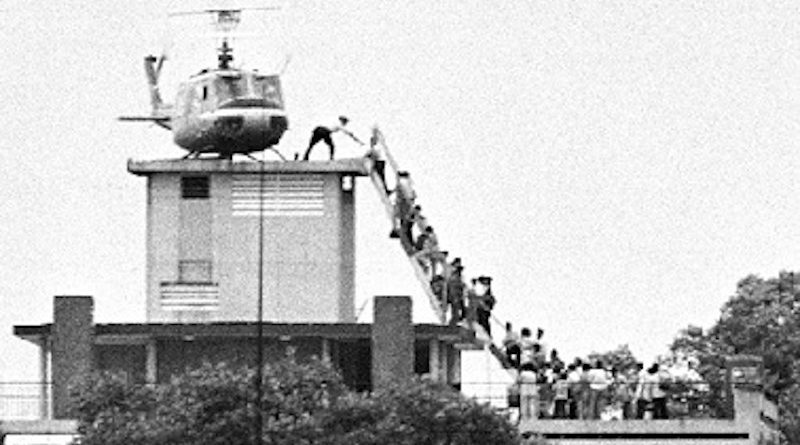 A member of the CIA helps evacuees up a ladder onto an Air America helicopter on the roof of 22 Gia Long Street April 29, 1975, shortly before Saigon fell to advancing North Vietnamese troops. Photo Credit: Hubert van Es, Wikipedia Commons

It was a feeling of deja vu when one read about the overtures made to the Indian government by the Taliban representative Mohammed Abbas Stanekzai following the insurgent group’s lightning takeover in Kabul on August 15, the second time in about 25 years. In 1996 also, after an Islamist government first took power in Kabul, it initially struck anti-Indian postures, but then began making placatory noises about the importance of developing “close relations.”

In 1992, soon after the Mujahideen ousted the government of President Mohammed Najibullah – who was brutally killed and his body hung publicly from a lamppost four years later – Kabul’s new rulers let it be known that Pakistan would be their new friend and ally. India, said the new Mujahideen rulers, would have to pay for its support to the then Soviet-backed Najibullah. Some leaders were also quoted as saying that all agreements between the two countries would be reviewed.

Interim President Sibgatollah Mojadidi told an Indian television correspondent soon after that India’s treatment of its Muslim minority would be an important determinant in fashioning “future ties with Afghanistan”. Thereafter, Kabul became a theatre of conflict between various armed groups till the arrival of the heavily ideologized Taliban that was spawned in the mosques and madrassas of Pakistan.

But, after coming to grips with the realities of power and being badly in need of development assistance after 20 years of continuous warfare had devastated Afghanistan’s infrastructure and economy, the new Taliban government in 1996 reached out to India. Afghan Charge d’affaires in New Delhi, Sayed Said Naderi, was quoted as having said at a news conference that “governments come and go, but the relations between the two peoples remain.”

He said the new government wanted “very close relations” with India and was looking for its help in rebuilding the Afghan economic infrastructure.

Naderi, according to old records, recalled the historic ties in economic, commercial and cultural fields – the same was echoed by Stanekzai 25 years later in Doha last month  –  and added, “We would like to see that these cordial relations are far more expanded in the interest of both countries.”

Naderi then had also assured security for ethnic Indians who fled the country following attacks on their homes and business and urged them to return – something that the new Taliban rulers are also trying to do after Afghans and Hindus made a beeline for Indian evacuation following the August 15 takeover of Kabul by the Taliban.

Although New Delhi was then criticized as “losing out” to Pakistan diplomatically in building relations with the new Afghan government  – something that is also happening now – the Ministry of External Affairs has maintained that its Afghan policy has been consistent and would stand vindicated. Senior officials then said the only agreements India has with Afghanistan are humanitarian and if the new government, out of ignorance, chose to review them, it will be to its detriment.

While initially, the Mujahideen’s Majadiddi took an antagonistic line on Kashmir, Naderi said the problem should be resolved peaceably between India and Pakistan – a line they have taken even now, 25 years later, signifying that the Taliban have dug up old organizational positions and have chosen to largely abide by them.

At that time, according to old IANS reports, eleven Indian diplomatic and other officials braved mortar and rocket fire to take the last flight out of Kabul, within hours of the Taliban militia gaining control of the Afghan capital. There was, however, no recorded move to evacuate Afghan Hindus and Sikhs out of Taliban-captured Afghanistan back in the nineties.

The 11 Indian officials – of whom five were diplomats headed by the charge d’affaires A.S. Toor – made a dash for the Bagram airport in Kabul around noon after the city came under heavy artillery fire on Sept. 27.  Even after they boarded the Ariana Airlines flight, the airport came under rocket attack, jeopardizing the takeoff. But the president of Ariana, who was also on the flight, ordered the pilot to take off at once.

Indian officials even then spent sleepless nights trying to ensure the evacuation, and the return of the Indians from Kabul was met with huge relief.

What was worrying Indian policy-makers back then was the impact the Taliban victory could have on Kashmir. Afghan mercenaries had been active in Kashmir and Indian intelligence officials felt that the new Pakistan-Afghanistan nexus could fuel “cross-border terrorism.”

The first diplomatic appointment by Kabul in 1996 had been to announce an ambassador to Pakistan.  India was seen then to have lost out to Pakistan, which seemed to be in a hurry to forge some kind of an Islamic axis with the new Afghan dispensation and beyond. History seems to be eerily repeating itself a quarter-century hence as Islamabad sent a high-level delegation, led by the Inter Services Intelligence (IS) chief Faiz Hameed, to Kabul over the weekend in a move to have a say in government formation and policy orientations.

Should India be worried? India’s ties with Afghanistan – unlike with Pakistan which is a more patron-client relationship – have a strong developmental dimension, and the new Taliban dispensation – if they want to take governance seriously – can ignore India only at its own peril.

“If they don’t want an Indian-built hospital or technical school or highway, it is their lookout,” is the official Indian stance, confident that Kabul would not like to squander away or undo these developmental gains that have been widely acknowledged, except perhaps in Islamabad, which has been trying it best to influence and mould the new Taliban regime in their ideological mould, which was to keep India as far apart from Afghanistan, not just physically but economically, culturally and strategically.  Over the last three decades, India has only strengthened ties with Afghanistan, building schools, hospitals, highways and its new parliament building in developmental assistance said to be in the range of USD 3 billion, one of the largest from any country.

Knowledgeable observers, including diplomats who have served there, feet that no Afghan government could ignore India in the long run, because Islamabad could never give what Kabul received from India, something built on the foundation of strong historical, cultural, and people-to-people bonds. But how that would square with the new Kabul-Islamabad-Beijing-Moscow axis that seems to be incubating is anyone’s guess. Hence, the official public policy is to “wait and watch” how things pan out in Kabul while weighing the pros and cons of various responses to the Taliban’s conflicting messaging.

As New Delhi crafts a calibrated policy towards a new Kabul, while keeping a close watch on dynamics in regional capitals, not wanting to rush to embrace the Taliban, but not shunning their advances either, the diplomatic learnings from the archives of South Block of a quarter-century ago should act as a guidepost for dealing with an unpredictable Taliban.

*About the author: The writer is President, SPS. The views expressed are personal