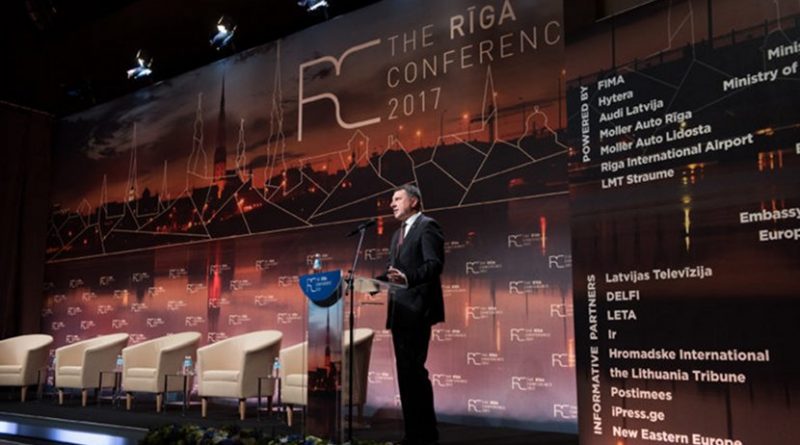 Latvian President Raimonds Vējonis opened the conference by describing today’s geopolitical climate as a time of change and uncertainty, as the comfortable years of the post-Cold War world are gone and democratic institutions and infrastructure are under attack. Although hard security remains a straightforward concern, the softer side of security requires greater investment to protect the West’s information space, to improve media literacy, and to assure social cohesion among various ethnic groups. Vējonis’ words spoke to the breadth of topics discussed at the Riga Conference, which extended from what to expect from NATO’s summit in Brussels in 2018 to the future of globalization, the future of Russia, the agenda of the wider Nordic-Baltic region, and the question of populism.

Discussion on the future of Russia pivoted largely around a single question: will 2018 inaugurate Putin’s final term as Russian president, and what might that mean? Putin carried such weight in the discussion due primarily to his unique position among the Russian political and economic elite and their system of rule, which bears his name: “Putinism.” This type of governance was described as the distribution of rents among the various elites, distribution of which could be trusted only to Putin, in part because Putin has turned himself into the indispensable man over the past seventeen years, especially since 2012. Some discussants predicted that if Putin were elected in 2018 to a final term, he would become a lame duck president while jockeying for power and position among the Russian political and economic elite would begin on the first day as everyone sought to prepare themselves for a post-Putin Russia.

Others disagreed, arguing that Putin has become so successful at turning himself into the indispensable man among the Russian elite that there was no option for him to leave power. Putin has become a prisoner of the Kremlin, as well as its ruler. Russia’s current political system simply could not function without Putin in the center. This appraisal is reinforced by the Medvedev experiment, which was considered by the Russian ruling elite to be a dangerous failure, one which culminated in the irresponsible abstention from the UN Security Council vote on the Libya intervention in 2011. There was some speculation on Putin’s position after his fourth term as president. Would he change or break the constitution by serving a third consecutive (and fifth overall) term? Given the powers of the presidency, this was deemed a possibility. Another possibility is Putin’s potential ascension beyond the presidency to become a semi-mystical father of the nation figure, beyond the formal political system yet still presiding over it.

Beyond Putin, Russia’s modernization was also discussed. Russia is not ready for the 21st century—economically, militarily, in terms of human capital, and so forth. It was suggested that Putin himself recognizes this, but that little will happen before the conclusion of the March 2018 elections at the very earliest. A parallel was drawn between the widespread structural reforms which Putin would have to effect to modernize Russia for the future and those which faced Gorbachev in the 1980s, emphasizing the scale and political contentiousness of the challenges which now face Putin in this realm. However, on the specific point of military modernization, the Russians have been approaching the issue far more intelligently than in the 1980s. Instead of seeking to match the United States weapon system for weapon system, Russia today is far more focused on key capabilities which can effectively challenge the United States—such as electronic warfare—and other core military capabilities required to defend Russia from potential future threats.

Russia’s continued involvement in Ukraine was also a subject of significant discussion, largely due to Russia’s recent promotion of a facsimile of a previous Ukrainian proposal to introduce peacekeepers into the Donbas region. Key differences were highlighted between the original Ukrainian hope for peacekeepers and the Russian proposal, of which the most significant was the Ukrainian requirement that the border between the Donbas and Russia also be manned by peacekeepers, as opposed to the Russian plan which anticipated peacekeepers only on the line of contact between Ukrainian forces and Russian and separatist forces in the Donbas, a deployment which would only freeze the conflict indefinitely. There was much speculation whether the Russian proposal represented an opportunity which might be exploited or simply a diplomatic tactic to divide Ukraine from the West.

Some suggested that the proposal represented a recalibration of Russian calculations regarding the Donbas, particularly considering the possible provision of lethal aid—defensive systems such as anti-tank armaments and anti-artillery radar—by the United States to Ukraine. Economic arguments to explain the Russian proposal were also raised, including the sheer cost of maintaining Crimea and the Donbas both through military and non-military aid and investment, as well as the cost of sanctions. The former costs account for approximately 0.7% of Russian GDP per year, and the latter another 0.5-0.7%, sums of money which together are nearly equivalent to the entire anticipated growth of the Russian economy in 2017. There was little concern about the supposedly escalatory potential of American lethal aid, which in any case could only be more symbolic than real, given the defensive character of the systems proposed and the reality of Russia’s own aid and interventions in the Donbas since 2014.

Finally, looking forward to the NATO summit in Brussels in 2018, the Ministers of Defense of Latvia and Canada, Raimonds Bergmanis and Harjit Singh Sajjan, respectively, produced a long list of concerns which they hoped the summit would address. Their lists focused primarily on specific questions of military capability, such as more effective logistical systems and new logistical concepts, a greater emphasis on air and maritime security in the Baltic Sea region, improving the public’s engagement in defense, a more flexible command structure, and a reflection on whether NATO member states are acquiring the right capabilities to be ready for future security threats. The 2% of GDP defense spending target was also questioned, given that it focuses on expense rather than on capabilities. Nevertheless, others defended it as a catchy and publicly digestible encapsulation of the expectations which NATO places upon its member states, and therefore as being irreplaceable, albeit not enough.

Alongside the immediate future of NATO came discussion about the future of European—as opposed to NATO—defense. The European Union is currently experiencing momentum and initiative in defense, but there was concern that this momentum would weaken European defense efforts through excessive enthusiasm and optimism, resulting in skipping vital steps in defense reform and consolidation. Questions were posed, but not answered, as to whether Europe has a stable basis for a real common defense, and whether it would be able to sustain its development in defense. Ultimately, if the United States were absent, as it would be in the case of European defense, who would take the lead? Germany could not be expected to step up. Yet is a leader even necessary? Without the United States, and with the United Kingdom leaving the European Union because of Brexit, European nuclear capability and security becomes a far more pressing question as well, and is one for which Europe currently has no satisfactory answer.

This essay reports on discussions held at the Riga Conference, September 29-30, 2017.

About the author:
*Lukas Milevski is a Baltic Sea Fellow in the Eurasia Program at FPRI.

By Samuel Ramani* On August 18, Mali’s President Ibrahim Boubacar Keita was overthrown in a coup d’etat led by breakaway