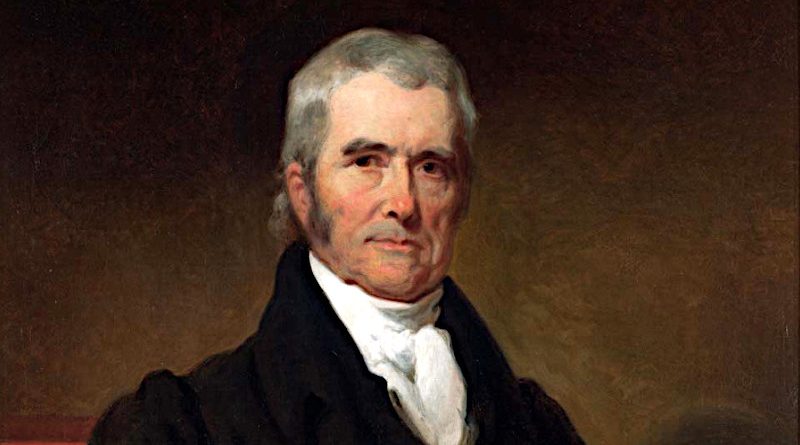 Marshall County, Alabama, is located in the north of the state near Huntsville. It was founded in 1836 and named for Chief Justice John Marshall, the fourth chief justice of the United States and an ardent nationalist.

In step with the times, it is also the target of regular protests.

One facet of the protests is aimed at Marshall himself.

In video footage captured Wednesday by WHNT-TV, several stuffed black bags were seen lined up on the grass outside the courthouse, with accompanying signs identifying the names and prices of the former slaves that protest organizers said Marshall owned. The signs also included a recurring phrase: “Marshall’s heritage of hate.”

The fake body bags bearing names of some Marshall slaves and their price when bought were joined by orange stakes representing the total number of slaves Marshall owned. Among the names and prices were “Moses $74,” “Bob $55,” “Israel $55” and “Unknown woman $38.”

Protest organizer Unique Dunston finds that “[i]t is telling that the people here thought very highly of John Marshall and named he whole county for him,” even though Marshall never visited the county bearing his name. In other words, protestors attempt to link Marshall’s slave holding with admiration of Alabamans who named a county after him.

I’m no fan of John Marshall, but the Leftists attacking him should be. The Left typically champions people who contribute to centralization of power, undermine a Jeffersonian strict constructionist reading of the Constitution, and empower the federal judiciary. Marshall’s nationalist jurisprudence provided a foundation for the building of the progressive state in the 20th century. Indeed, liberal law professors have long praised Marshall for his foresight.

But in the radical frenzy of today, only one thing matters about Marshall: he owned slaves. Of course, this does not make Marshall unique. Practically every noted statesman, war hero, or jurist in the Old Dominion from the American Revolution to adoption of the 13th Amendment owned slaves. Looking through the lens of presentism, are we to believe that no Virginian born prior to the abolition of slavery is worthy of remembrance or honor? Not Washington, Jefferson, Madison, Monroe, nor Marshall? This is insanity.

American radicals are fixated on an institution that died 155 years ago. The Left’s capture of academia and the news media has allowed it to teach that the United States is evil because of slavery, an institution common to humanity, that has existed throughout the globe, and thus is not unique to the United States. Slavery and racial injustice are part of the story of America, but not the only story. The radicals would have us ignore the heroism of the Revolution, the so-called Miracle at Philadelphia, and the legacy of liberty under law.

As for individuals such as Marshall who lived in, and were shaped by, the 17th century world, it is no surprise that most of them accepted slavery. Slavery was a legal institution throughout the British Empire. As Marshall came of age and grew in stature, no European country had even abolished the slave trade. Marshall was very much a creature of his times just as the thoughts and patterns of modern Americans are shaped by our times.

As the foolishness in Alabama indicates, a rational perspective is needed as we discuss historical figures such as Marshall. The newly created 1776 Commission would be a good start, but it is likely stillborn because of the 2o20 election results.

Home » The Radicals Are Gunning For John Marshall – OpEd