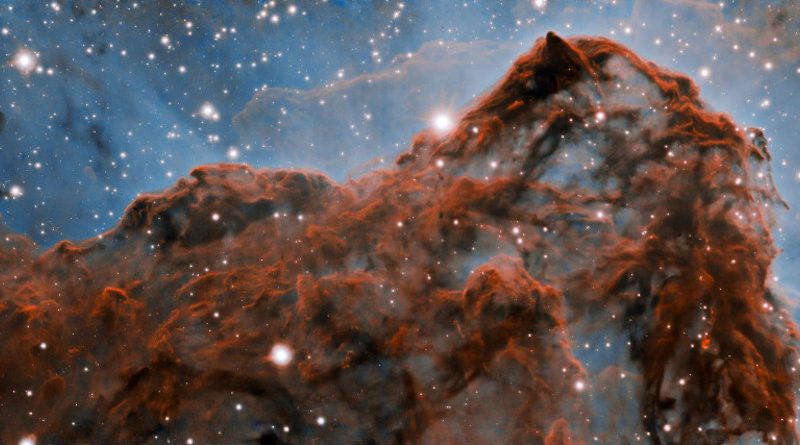 A 50-trillion-km (33-trillion-mile, or 5 light-year) long section of the western wall in the Carina Nebula, as observed with adaptive optics on the Gemini South telescope. This mountainous section of the nebula reveals a number of unusual structures including a long series of parallel ridges that could be produced by a magnetic field, a remarkable almost perfectly smooth wave, and fragments that appear to be in the process of being sheared off the cloud by a strong wind. There is also evidence for a jet of material ejected from a newly-formed star. The exquisite detail seen in the image is in part due to a technology known as adaptive optics, which resulted in a ten-fold improvement in the resolution of the research team's observations. CREDIT: International Gemini Observatory/NOIRLab/NSF/AURA Acknowledgment: PI: Patrick Hartigan (Rice University) Image processing: Patrick Hartigan (Rice University), Travis Rector (University of Alaska Anchorage), Mahdi Zamani & Davide de Martin

Astronomers using the international Gemini Observatory, a Program of NSF’s NOIRLab, have captured the western wall of the Carina Nebula in unprecedented detail in a compelling image released today. The image reveals a number of unusual structures in the nebula. The exquisite detail revealed in the image is in part due to a technology known as adaptive optics, which resulted in a ten-fold improvement in the sharpness of the research team’s observations.

There is no better location to investigate the birth of stars than nebulae — regions of gas and dust where stars coalesce, heat up and start to glow. The brilliant Carina Nebula, located in the southern hemisphere sky, is 500 times larger in actual area than the better-known Orion Nebula, making it an ideal candidate for investigating star formation.

The team used adaptive optics on the 8.1-meter Gemini South telescope in Chile to significantly improve upon previous observations of the Carina Nebula’s western wall, the well-defined edge of the nebula. Adaptive optics compensates for the effects of turbulence in the Earth’s atmosphere to produce pin-sharp images, comparable to those from a space telescope. Indeed, this image is reminiscent of the famous Hubble Pillars of Creation in the Eagle Nebula.

Star-forming regions are shrouded in dust but it is possible to see through the shroud of dust by observing in infrared light. The team, led by Patrick Hartigan of Rice University, utilized the Gemini South Adaptive Optics Imager (GSAOI), a near-infrared adaptive optics camera, to peer through the outer layers of dust to reveal a huge wall of dust and gas glowing with the intense ultraviolet light from nearby massive young stars. This region is a great example of such a wall and this image provides a very clear view of a star-forming region in the near-infrared [1].

With a resolution ten times higher than it would be without adaptive optics from the ground [2], the image reveals a wealth of detail never observed before. This mountainous section of the nebula reveals a number of unusual structures. There is a long series of parallel ridges that could be produced by a magnetic field, a remarkable almost perfectly smooth wave, and fragments that appear to be in the process of being sheared off the cloud by a strong wind. There is also evidence for a jet of material ejected from a newly-formed star.

The image provides the sharpest view to date of how massive young stars affect their surroundings and influence how star and planet formation proceeds. “It is possible that the Sun formed in such an environment,” said Hartigan. “If so, radiation and winds from any nearby massive stars would have affected the masses and atmospheres of the Solar System’s outer planets.” Astronomers are just beginning to model how such stars affect the evolution of planetary systems.

This spectacular image is a wonderful demonstration of the effectiveness of adaptive optics. It is also the first time that this region has been observed using this technique, so every new detail is a fascinating first glimpse for astronomers and the general public alike, and gives a taste of what could be possible with the upcoming James Webb Space Telescope.

[1] The region was examined at the infrared wavelength of molecular hydrogen (2120 nm). Molecular hydrogen is the best way to trace the structures because they would otherwise be rendered invisible by dust blocking them at optical and ultraviolet wavelengths (where the Hubble Space Telescope operates).

[2] The images are about twice as sharp as those from the Hubble Space Telescope at this wavelength.