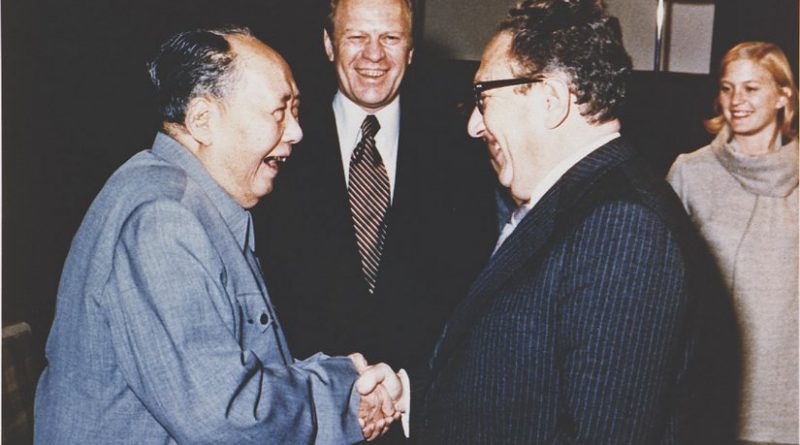 As China’s economy steadily grows, its relationship with the United States has transformed from cooperative co-evolution to decoupling.

Henry Kissinger, US secretary of state from 1973 to 1977, remains a rock star in China. So when US-Chinese relations go awry, Chinese leaders turn to Kissinger. In his 2011 book On China, Kissinger proposed that the United States and China should “pursue their domestic imperatives, cooperating where possible, and adjust their relations to minimize conflict.” He calls this “co-evolution.” And amid heightened tensions between the two countries, the veteran diplomat emphasized to Chinese President Xi Jinping in Beijing that cooperation between the two countries is “essential for peace and progress in the world.”

Meanwhile in Washington, the atmosphere is not so friendly with talk of “decoupling” from China. President Donald Trump’s strategists expect this to be effective in countering Beijing’s influence and shifting the global supply chain. The process would also minimize the two countries’ reliance on each other on matters of economics and geopolitics, even to the extent of exclusion. In the latest development, one of Trump’s economic advisers quipped to BBC: “Should we pursue evicting China from the WTO?” Kevin Hassett, chairman of the president’s Council of Economic Advisers added that China had “misbehaved” as a member of the WTO and the Trump administration’s punitive approach “is working.”

Supporters of Trump’s China policy hail the administration’s hawkish stance. Opponents warn that without a new name for the US dance card in sight, the split between the world’s two biggest economies and military establishments will corrode global supply chains and destabilize an already fragile world order.

China’s admission into the world trading system in 2001 marked a significant milestone in globalization, benefiting China enormously and creating market opportunities for the United States. That’s why when Trump publicly denounced globalization, Xi did exactly the opposite. Countries that once advocated for an interconnected world no longer celebrate it. The term “globalization” is so tainted these days that Trump even blames US allies such as Japan and the European Union for allegedly “ripping America off.” And in the UK, austerity policies carried out after the last round of global financial crises a decade ago, along with an effectively borderless European travel arrangement, largely resulted in the 2016 vote to leave the European Union.

There are legitimate concerns in Washington over the extent to which China has unfairly taken advantage of its convergence into the global trading system and globalization itself. After all, Beijing has a bad track record of protecting intellectual property and restricting market access for foreign companies while injecting billions of dollars each year to prop up its state-owned enterprises. Moreover, its ambitious state-sponsored Made in China 2025 plan reportedly aims to challenge US supremacy in sophisticated technologies arenas such as AI and biotech.

Pessimism over bilateral relations, however, did not originate with Trump. During the Obama administration, officials from both capitals clashed over intellectual property and regional security, and Washington questioned Beijing’s sincerity on tackling US complaints. “In other words, Beijing took advantage of the process,” one former US trade official confided recently.

There is truth on both sides. Trump is right in pointing out China’s misbehavior in international trade by tackling issues such as intellectual property theft and unfair state subsidies. However, the United States cannot slash its trade deficit with the rest of the world unless Americans have enough savings in their bank accounts.

Although Trump supporters disparage cheap imports from China, Americans dependent on credit cards rely on those low prices. When the White House considered additional tariffs on $200 billion worth of Chinese goods in September, retail giant Walmart warned US Trade Representative Robert Lighthizer that the immediate impact “will be to raise prices on consumers and tax American businesses and manufacturers.”

The parochial outlook in the United States and the growing nationalism in China is heading toward disengagement. This is disruptive and dangerous, for two reasons.

Geopolitically, a divorce forces other countries – mainly longstanding US allies in the region – to pick sides. Japan, India, Australia and South Korea and other likeminded countries in the region are economically entangled with China. The latest warning came from Singapore’s Prime Minister Lee Hsien-loong at November’s ASEAN summit: “If you are friends with two countries which are on different sides, sometimes it is possible to get along with both, sometimes it’s more awkward when you try to get along with both.”

Secondly, disengagement could lead to hostility. During the 1990s, an engaged China promised to abide by the Missile Technology Control Regime, acceded to the Nuclear Non-proliferation Treaty and signed the Chemical Weapons Convention. Today’s challenges of North Korea, counterterrorism and cybersecurity require major powers to work together rather than against one another. During the Obama administration, Washington and Beijing reached an unprecedented agreement on controlling cyberattacks as well as a landmark agreement in Paris to curb rising temperatures.

Former US President Richard Nixon’s 1972 visit to China changed the configuration of the Cold War and brought the People’s Republic into a world that it once denounced as “dominated by American imperialists.” The relationship of 47 years could not have been possible without the subsequent talks that produced three landmark communiques in 1972, 1979 and 1982 – regarded as the foundation for modern US-China relations – signed when China’s GDP was merely a fraction of the US GDP.

Washington and Beijing should seek a new paradigm in the bilateral relationship. First, the two countries must develop a new set of rules in trade and economics, incorporating these into existing agreements and encouraging both economies to prosper in the 21st century. This would also involve setting norms in areas such as technology as well as inbound and outbound investments.

Second, Washington and Beijing must figure out how to coexist militarily. As China expands its military presence, the existing security alignment in the region changes, too. Peace depends on a sustainable risk-managing mechanism developed by both sides to avoid tit-for-tat military confrontation, for example over the South China Sea.

Third, while reiterating the “core interests” of both sides, Washington and Beijing should recognize the changing global geopolitical environment and find ways to collaborate to minimize risks and contribute to global public goods. Controlling global pandemics and sanctions enforcement to rein in North Korea’s nuclear ambition, for instance, has produced positive results in the past. While dubbed by some analysts as “rewriting the post-war global order,” such cooperation should not echo a “grand bargain” and regression to a dangerous world with spheres of influence.

For now, the United States and China seem to merely test each other’s patience, threatening decoupling that will only bring turbulence in the global supply chain and an unpredictable future. This is tactic, not strategy and tactics do not guarantee long-term stability.

*Vincent Ni is a 2018 Yale Greenberg World Fellow. As a journalist over the past decade, he has reported from the United States, China, Europe and the Middle East, in both the English and Chinese languages. He is also a Fellow at Britain’s Royal Society of Arts. Views expressed here are entirely his own and do not reflect those of his employer.

Home » US And China: From Co-Evolution To Decoupling – Analysis

One thought on “US And China: From Co-Evolution To Decoupling – Analysis”