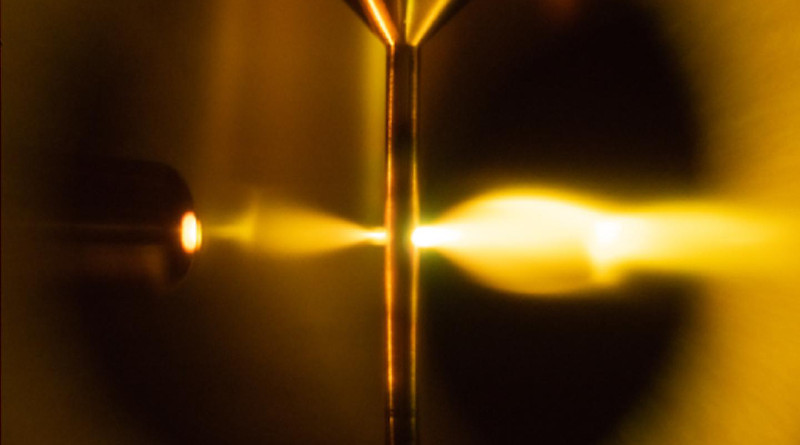 The photograph is taken during the high-harmonic-generation process in the high-pressure gas cell, with the mid-infrared input arriving on the right and the soft x-ray output appearing on the left. CREDIT: ETH Zurich/D-PHYS Keller group

The ability to generate light pulses of sub-femtosecond duration, first demonstrated some 20 years ago, has given rise to an entirely new field: attosecond science and technology. Table-top laser systems have emerged that enable studies that for decades were but a distant dream — to follow, image and characterise electronic processes in atoms, molecules and solids on their natural, attosecond timescales. The laser systems that make such studies possible typically operate in the extreme ultraviolet spectral band.

There has long been a push to achieve higher photon energies though. Of particular interest is the ‘water window’, occupied by soft x-ray radiation with wavelengths between 2.2 and 4.4 nm. That spectral window owes its name, and importance, to the fact that at those frequencies, photons are not absorbed by oxygen (and hence by water), but they are by carbon. This is ideal for studying organic molecules and biological specimens in their natural aqueous environment.

Today, a handful of attosecond sources spanning this frequency range exist, but their applicability is limited by relatively low repetition rates of 1 kHz or below, which in turn means low count rates and poor signal-to-noise ratios.

Writing in Optica, Justinas Pupeikis and colleagues in the Ultrafast Laser Physics group of Prof. Ursula Keller at the Institute for Quantum Electronics report now an essential leap to overcome the limitations of the prior sources. They present the first soft-x-ray source that spans the full water window at 100 kHz repetition rate — a hundredfold improvement compared to the state-of-the-art sources.

A boost in technological capability

The bottleneck in producing soft x-rays at high repetition rates has been the lack of suitable laser systems to drive the key process underlying attosecond-pulse generation in table–top systems.

That process is known as high-harmonic generation, and it involves an intense femtosecond laser pulse interacting with a target, typically an atomic gas. The nonlinear electronic response of the target then causes the emission of attosecond pulses at an odd-order multiple of the frequency of the driving laser field.

To ensure that that response contains x-ray photons spanning the water-window range, the femtosecond source has to operate in the mid-infrared range. Also, it has to deliver high-peak-power pulses. And all of that at high repetition rates. Such a source did not exist so far.

Pupeikis et al. took up the challenge and systematically improved a layout they had already explored in earlier work, based on optical parametric chirped pulse amplification (or OPCPA for short). They had established before that the approach is promising with a view to realizing high-power mid-infrared sources, but substantial improvements were still needed to reach the performance required for the high-harmonic generation of x-ray photons in the water window.

In particular, they pushed the peak power from previously 6.3 GW to 14.2 GW, and they reached an average power of 25 W for pulses just a bit longer than two oscillations of the underlying optical field (16.5 fs). The peak power demonstrated is comfortably the highest reported to date for any high-repetition-rate system with a wavelength above 2 μm (see the figure, panel a).

Ready for the x-ray room

With this level of performance at their disposal, the team was ready for the next stage, frequency upconversion through high-harmonic generation. For that, the output beam of the OPCPA was routed via a periscope system to another laboratory more than 15 m away, to accommodate for local lab-space constraints.

There, the beam met a helium target, kept at a pressure of 45 bar. Such high pressure was necessary for phase-matching between the infrared and the x-ray radiation, and thus optimal energy-conversion efficiency.

All pieces carefully put in place, the system indeed delivered. It generated coherent soft x-ray radiation extending to an energy of 620 eV (2 nm wavelength), covering the full water window — a stand-out achievement relative to other high-repetition-rate sources in this frequency range, see panel b of the figure.

A window of opportunity

This demonstration opens up a vast spectrum of fresh opportunities. Coherent imaging in the water-window spectral region, highly relevant for chemistry and biology, should be possible with a compact setup.

At the same time, the high repetition rate available helps, for instance, addressing the limitations due to space-charge formation which plague photoemission experiments with pulsed sources. Moreover, the ‘water window’ comprises not only the K-edges of carbon, nitrogen and oxygen, but also the L- and M-edges of a range of metals, which can now be studied with higher sensitivity or specificity.

With such bright prospects, the realization of the source now presented heralds the beginning of the next generation of attosecond technology, one where experimentalists for the first time can make combined use of high repetition rates and high photon energies. An attosecond beamline designed to exploit these new capabilities is currently under construction in the Keller lab.

Serbian Mine Gives Up Dark Secret Of Kosovo War – Analysis