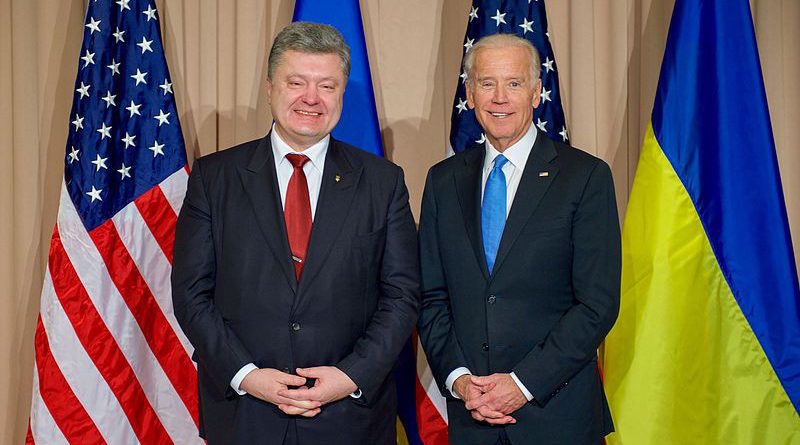 Vice President Joe Biden stands with Ukrainian President Petro Poroshenko on January 20, 2016, at the Intercontinental Hotel in Davos, Switzerland, before a bilateral meeting on the sidelines of the World Economic Forum. [State Department photo/ Public Domain]

Within hours, a former president tweeted that his country was “blessed,” an investment banker voiced hope for reforms, and a political analyst said fears that Washington might use Ukraine as a pawn in a bid for a Russia reset would fade.

For many politicians, civil-society leaders, and citizens in Ukraine, the news came as a relief.

Barack Obama’s former point man on Ukraine is a relatively familiar face in Kyiv, and Biden, in turn, may be more familiar with Ukraine than any previous U.S. president.

He made six trips to Kyiv as vice president, five of them from 2014 onward — after Russia seized the Crimean Peninsula and fomented separatism following the downfall of Viktor Yanukovych, the Moscow-friendly president pushed from power by the Euromaidan protest movement. Biden once joked that he spoke more over the phone with then-President Petro Poroshenko than with his wife during those turbulent years.

Also, he is not President Donald Trump, a leader who has had few positive words for Ukraine and whose impeachment trial cast the country into the center of a bitter political battle in the United States.

And after watching the United States disengage from the world stage in some ways under Trump, Ukrainians who are happy with the U.S. election result hope the country will get a boost in its battles against both corruption and aggression from Russia, which continues to support separatists who hold parts of two eastern provinces and whose simmering war with Kyiv has killed more than 13,000 people.

“Ukraine is blessed to have a US President with profound and personal knowledge of our country,” Poroshenko tweeted in English late on November 7, voicing hope for “committed transatlantic leadership.”

Current President Volodymyr Zelenskiy congratulated Biden and Vice President-elect Kamala Harris, tweeting that Ukraine “is optimistic about the future of the strategic partnership” with the United States.

Long a focus of geopolitical struggles between Russia and the West, Ukraine was reluctantly drawn into the whirlwind of U.S. politics when a phone call that Trump held with Zelenskiy in July 2019 became a central subject of his impeachment trial.

The trial centered on the allegation that Trump “used his official powers to pressure” Ukraine’s government to “interfere in a United States election for his personal political gain,” in part by allegedly seeking to get Zelenskiy to promise investigations into Biden and his son, who formerly held a lucrative seat on the board of a Kyiv-based natural-gas producer, Burisma.

Trump was impeached by the Democrat-led House of Representatives but acquitted by the Republican-controlled Senate in February 2020. But the controversy persisted throughout the campaign, as Trump and his Republican allies questioned the propriety of the actions of Biden and his son, Hunter Biden.

During the impeachment trial, Kyiv cringed as witnesses testified that Trump had badmouthed Ukraine, allegedly calling it “a terrible place,” where “they’re all corrupt,” among other things. And the U.S. ambassador to Ukraine, Marie Yovanovitch, had been abruptly removed in April 2019.

For some Ukrainians, these developments compounded concerns that arise from Trump’s seeming reluctance to criticize Russian President Vladimir Putin over issues including Moscow’s actions in Ukraine, its alleged interference in U.S. elections, and its human rights record.

That was when the United States “began to lose political leverage over Ukraine,” said Daria Kalenyuk, the executive director of the Anti-Corruption Action Center in Kyiv.

All of sudden, “it looked like we [were] not a strategic partner [of the United States] anymore,” she said. “There [hadn’t] been an ambassador for more than a year, so pro-Russian political and oligarchic forces started using fakes and propaganda against American diplomats that were taken seriously at the highest leadership of the White House and this weakened the relationship between the U.S. and Ukraine.”

Accounts of Trump’s criticism of Ukraine that emerged during the impeachment trial also startled Alyona Hetmanchuk, director of the New Europe Center policy center in Kyiv.

“We thought the translation was wrong or something was quoted out of context,” she said. “We never heard such things [about Ukraine from] a foreign leader, except from Putin.”

At the same time, Hetmanchuk pointed out that on the practical level, U.S. support has persisted. Trump approved the delivery of lethal weapons to Ukraine, unlike Obama.

The State Department issued a Crimea Declaration in 2018, reinforcing backing for Ukraine’s territorial integrity and sovereignty, she said, and the United States has helped Ukraine receive “an enhanced opportunity partnership with NATO,” and relaunched a “strategic partnership” with Ukraine.

Observers say that they do not expect U.S. sanctions against Moscow to be softened under a Biden presidency, and pointed to efforts to scuttle the Nord Stream 2 pipeline as another move by the Trump administration to keep Russia in check. If completed, the Baltic Sea pipeline would virtually eliminate Ukraine’s strategic role as a supplier of Russian energy to the European Union.

“American governing institutions kept U.S. foreign policy toward Ukraine consistent,” said Oleksiy Melnyk, co-director of foreign relations and international security programs at the Razumkov Center think tank in Kyiv. But, he added, “There was still a fear that in a second Trump term, Ukraine would be used as negotiating piece — like ceding territory in exchange for resetting relations with Russia.”

Mykola Prysyazhnyuk, 40, a quality-assurance engineer at an IT company who lives in an outlying Kyiv neighborhood, echoed that concern and said he believes Biden will more attentive to Ukraine’s interests. “Ukrainians fear more how policy will change toward Russia,” he said. “I think Biden will pay more attention to Ukraine than Trump did.”

Oleksiy Haran, a professor of political science at the Kyiv-Mohyla Academy and research director at the Democratic Initiatives think tank, suggested that the contrast between the president’s apparent attitudes and U.S. policy — on Ukraine and other issues — is likely to fade under Biden.

In this sense, Biden would “provide more stability and predictability” in U.S. foreign policy, including for Ukraine, Haran said.

Biden “really knows Ukraine on a substantive level” and knows “what reforms are needed, how they work, and what impact they could make,” he said, adding that he does not expect to see Washington pursuing a reset with Moscow or what he called the “whitewashing of Putin that we saw under Trump.”

Biden has called Russia an “adversary” and a threat, Melnyk pointed out, saying that he expects the administration to have few illusions about Moscow’s intentions and asserting that the United States and Ukraine have “a mutual enemy.”

Many of its citizens have not forgotten how “soft Obama was on Russia after Crimea was illegally annexed,” she said, “and his reluctance to provide lethal weapons, which would’ve been a symbolic gesture.”

Haran and Hetmanchuk said that the shape of U.S. ties will depend heavily on appointments Biden makes to key positions at the State Department, Pentagon, and other agencies, particularly as he is expected to focus heavily on domestic issues in the divided United States early in his term.

That means that foreign policy “hinges on the administration and who will handle Ukraine,” Hetmanchuk said.

Biden’s victory comes at a time when there are widespread concerns that Kyiv’s efforts to curb corruption and enact reforms are backsliding dangerously.

Serhiy Fursa, deputy CEO of Kyiv-based investment bank Dragon Capital, said it was crucial that the United States press Zelenskiy’s government to do better on improving the judicial and law enforcement systems, ensuring the central bank’s independence, and complying with the International Monetary Fund’s requirements to keep lending Ukraine money.

“I see Biden pushing to accelerate reforms,” Fursa said of the president-elect, part of whose mandate in dealings with Kyiv as Obama’s vice president was to do just that. “If Biden is on top of the reform agenda, the investment climate should improve.”

“I think Biden will pay more attention to Ukraine, but Zelenskiy has a lot of homework to do,” Fursa added.

Kalenyuk of the anti-graft organization, meanwhile, said that she hoped that U.S. attention toward Kyiv under Biden would help reduce Moscow’s influence by “cutting Russian financial fuel in Ukraine” — curbing the Kremlin’s sway by reducing money flows.

Another potential factor in the future of U.S.-Ukraine ties is the relationship between Zelenskiy and Biden.

The two have never met, and Zelenskiy and his administration are wary of Western politicians following Trump’s impeachment trial, Hetmanchuk said.

“The political consensus is that we are doomed to a close strategic partnership” because Ukraine “faces an existential threat from Russia,” she said, but added, “There are people in the Ukrainian government who are cautious and don’t know what to expect.”