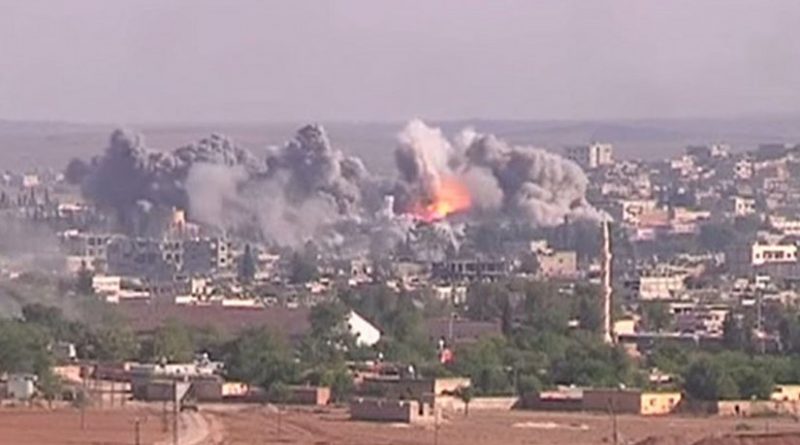 The United States and its allies seem determined to commemorate the 100th anniversary of World War I by starting World War III. Some of the same players are involved and their motives are as ignoble in the 21st century as they were in the 20th.

Nations like Iraq and Syria didn’t exist at all until after the defeat of the Ottoman Turks in 1918. Britain and France carved up the region and established the boundaries which are still in use for these countries. The Europeans have returned to their imperialist past and want to resume their interventions but now as clients of the United States.

The United States is the world’s only true super power and it has used that position to wreak the most havoc. Every crisis in the region from the flight of desperate refugees to the creation of the Islamic State can be laid at America’s doorstep.

America had willing puppets as it destroyed Iraq and Libya and then assumed it could easily do the same to Syria. They plotted and spread propaganda that the Assad government would fall but instead it hung on for four years despite the aggressions waged against it. Russia finally stepped up as an ally and made good on its promise to support the government which asked for its assistance. Of all the players now pledging to bomb the Islamic State in Syria, only Russia does so while respecting international law and Syria’s sovereignty.

Of course these alliances create great risk and Turkey contributed to the danger on November 24, 2015 when it shot down a Russian fighter jet. Despite a claim of a 17-second incursion into Turkish airspace, the plane and its pilots who ejected all descended onto Syrian territory.

As the guilty party always does, the Turks screamed like scalded dogs. They asked NATO to defend them when it was they who did the attacking. They faced the wrath of Vladimir Putin and lost out on a gas pipeline and now face sanctions, but they decided it was worth while to toady for the United States and NATO. The Turks have been proven right as the European Union makes plans for a 3 billion euro payment in exchange for a promise to stem the refugee tide making its way through that country. Turkey has made good on its desire to be part of the European empire. Its troops now occupy the northern regions of Iraq and refuse to leave despite angry demands from the Iraqi government.

The world is now descending into a vicious cycle of war and terrorism. The United States and the U.K. invade and occupy Iraq, which leads to the creation of the Islamic State, which attacks Beirut, Ankara, Paris and a Russian passenger plane. Regime change in Libya makes that country a route for refugees who flood Europe. The attempt to do the same in Syria also sends people fleeing and makes Europeans fearful of a brown skinned, Muslim horde. Racist fears lead to rationales for more war and on it goes.

Syria is the epicenter of crisis but it isn’t the only country which may create the long dreaded global conflagration. That is because the imperialists have chosen other places to gain the control they so desperately crave. In 2014 Ukraine was the site of a successful U.S. backed regime change scheme. The ultimate goal was to destroy Russia as an energy exporting nation and make the world safe for U.S. hegemony. There may not be war planes over Ukraine, but it remains the tail that wags the dog and provocations are the order of the day. On November 21, 2015 saboteurs exploded transmission towers which plunged Crimea into a blackout. Members of the Ukrainian Right Sector neo-fascist group and Crimean Tartar “activists” then attacked repair crews and kept the peninsula in darkness for two more weeks.

While the world watches Syria and Turkey, the Ukrainians continue to fulfill their role as the west’s most important puppets. Vice President Joe Biden made an in person promise to continue American support for Ukraine’s government. The International Monetary Fund (IMF) has already pledged to keep bailing out the nation which can’t repay its loans. This continued forgiveness is in direct violation of IMF rules. Obviously Ukraine is still very much an American trump card.

The only unknown is which provocation will act as the tipping point. It could be in Syria or Crimea or somewhere else. As long as president Obama shouts, “Assad must go,” the world is in great danger. Imperialism is persistent and it hasn’t changed very much in the past 100 years.