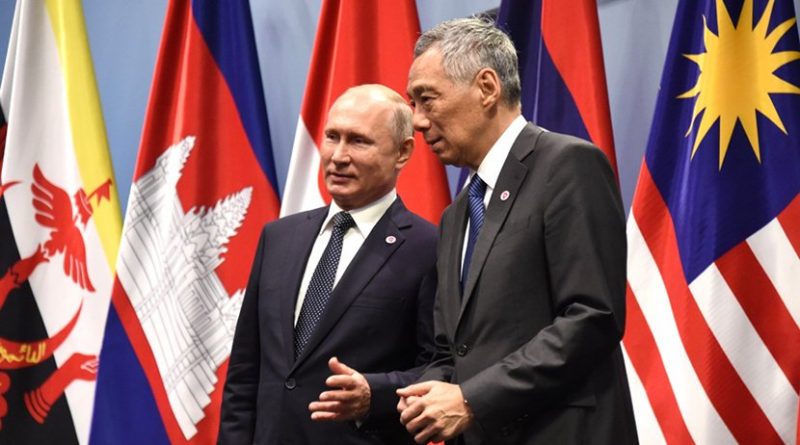 President Vladimir Putin’s state visit to Singapore this week, and in particular his participation in the 3rd ASEAN-Russia Summit and 13th East Asia Summit (EAS), mark an important step in Russia’s efforts to broaden its pivot to the East. Hitherto, its pivot has been focused on China and Northeast Asia.

Russia’s President Vladimir Putin made his first-ever state visit to Singapore this week, on 13 November 2018, coinciding with the 33rd ASEAN Summit and related regional summits of geopolitical significance to Moscow and the larger Asia-Pacific. His inaugural visit took place “as both countries celebrate the 50th anniversary of the establishment of diplomatic relations, reaffirms our broad-based and long-standing friendship with Russia,” a statement from the Singapore Ministry of Foreign Affairs said.

President Putin called on Singapore President Halimah Yacob and met Prime Minister Lee Hsien Loong. Presidents Putin and Halimah also co-officiated the groundbreaking ceremony of the Russian Cultural Centre (RCC). The RCC will promote the study of the Russian language and culture, and facilitate the exchange of performances, exhibitions and science and technology. Moreover, four bilateral agreements were signed on the sidelines of the visit.

President Putin’s visit comes nine years after that of Dmitry Medvedev in 2009, and more than two years after Prime Minister Lee’s 2016 visit to Russia.

Bilateral trade relations in the interim have grown from S$1.9 billion in 2007 to $7.4 billion in 2017; as of 2017, 690 Russian companies were present in Singapore with Russia being Singapore’s 24th largest trading partner. Singapore companies are active in Moscow, Tatarstan and the Penza region.

Singapore’s stock of Direct Investment Abroad in Russia amounted to $420 million as at the end of 2015; there are about 20 Singapore companies in Russia, in various sectors such as technology, consumer goods and services, infrastructure and trade.

Singapore’s economic links with Russia would be further enhanced with the possible role of Pavilion Energy (PE), a Singapore-based LNG company incorporated by Temasek, the Singapore global investment company, in the US$25.5 billion LNG project, Arctic LNG 2, to be developed by Novatek, Russia’s largest independent gas producer. This is a potential area of collaboration outlined in an agreement signed by Novatek’s Chairman, Leonid Mikhelson and PE CEO, Frederic Barnaud during the visit.

The fact that Singapore and the Russian-led Eurasian Economic Union (EEU) are working on a free trade agreement (FTA) also made the state visit worthwhile; currently, Vietnam is the only ASEAN member to have concluded an FTA with the EEU (in 2016).

President Putin’s first visit to Singapore would add momentum to moving the bilateral relationship to a higher level, in particular on the part of large Russian state companies seeking to expand their presence in Singapore or the region, using Singapore as a springboard.

President Putin’s other goal in making the trip to Singapore is to further cement the growing perception that Western attempts to isolate Russia have come to naught.

By attending the ASEAN-Russia and East Asia Summits, his first, President Putin has succeeded in signalling to Moscow’s Southeast Asian partner countries that he intends to broaden Russia’s widely-known pivot to the East, which has been hitherto more focused on China and Northeast Asia.

That there is an economic agenda as well is obvious. Many of the other EAS countries (the ASEAN 10 and their dialogue partners: Australia, Japan, India, China, New Zealand, the South Korea, and the United States) are already important and/or growing economic partners of Russia.

By attending these two meetings, President Putin has sought to assure his Southeast Asian partner countries and specifically ASEAN, that Russia is serious about enhancing ties; second, he would like to “show the flag” and perhaps illustrate to Southeast Asia that Russia is a power to be reckoned with in this region and cannot be written off; finally, he is signalling to the US and China, the current two major powers that are rivals in the region, that they must now expect Russia to become more active in and to seek influence in the region as well.

On the one hand, ASEAN should welcome a strong Russian presence in the region in political, economic and cultural and other spheres. It would benefit both sides if the current state of the relationship, which leaves much to be desired, were to be enhanced. Moreover, the region should neither become hostage to the current political, strategic and economic tension between the United States and China nor fall victim to the ramifications of this state of affairs, a tall order indeed but one certainly worth striving for.

On the other hand, ASEAN should be cognisant of the possibility that great power rivalry in the region could only intensify should President Putin’s visit lead to higher and more active levels of Russian influence. The US and China are also not likely to welcome any “competition” in this regard.

All things considered, however, it is unlikely that Russia would be able or even willing to invest the necessary resources to make itself felt in the region. This is not for want of trying or desire. But it will act practically as its current relationship with China, Japan and South Korea/North Korea in Northeast Asia is of a higher order in economic, political and strategic terms than with ASEAN.

*Chris Cheang is a Senior Fellow with the S. Rajaratnam School of International Studies (RSIS), Nanyang Technological University (NTU), Singapore. He served three tours of duty in the Singapore Embassy in Moscow between 1994 and 2013.