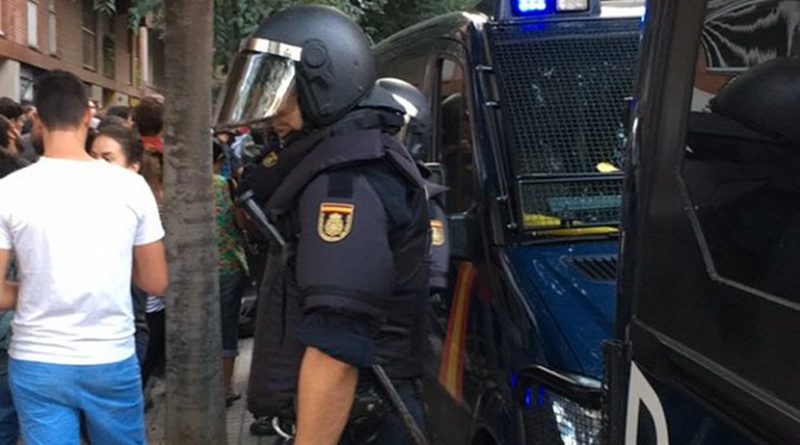 A Spanish officer of the National Police Corps in front of the headquarters of the Catalan political party Popular Unity Candidacy. File photo by Gerhidt, Wikipedia Commons.

Spanish police engaged in excessive force when confronting demonstrators in Catalonia during a disputed referendum, using batons to hit non-threatening protesters and causing multiple injuries, Human Rights Watch said. Human Rights Watch received many allegations of unjustified police use of force on October 1, 2017, and carried out on-site investigations after the poll to document specific incidents.

Human Rights Watch spoke to victims and witnesses and reviewed video, photographic, and medical evidence from the city of Girona and two villages in Girona and Barcelona provinces. Human Rights Watch found that the Civil Guard (Guardia Civil) or National Police Corps (Cuerpo Nacional de Policia) at times used excessive force in all three locations on October 1 as they sought to execute court orders to prevent the poll.

“Our detailed investigation into three cases found that national police and Civil Guard officers used excessive force on October 1 in Catalonia,” said Kartik Raj, Western Europe Researcher at Human Rights Watch. “The police may well have had the law on their side to enforce a court order but it didn’t give them the right to use violence against peaceful protesters.”

Despite being declared unconstitutional by Spain’s constitutional court, the Catalonia referendum took place on October 1. Across the region, the two police forces sent in by the central government, along with the Mossos d’Esquadra, Catalonia’s police force, sought to execute a court order to stop the referendum that also required them to respect “the coexistence between citizens.” They confronted largely peaceful protestors, although there were incidents in which some responded to the national forces with violence.

Hundreds were left injured, some seriously. Catalonia’s Health Department estimated on October 2 that 893 people had reported injuries to the authorities. Spain’s Ministry of the Interior said on October 1 that 19 national police and 14 Civil Guards had required urgent medical assistance, and that an “innumerable number of others” were injured.

Following the referendum, Human Rights Watch documented excessive use of force against peaceful demonstrators by Civil Guards or national police at a primary school in Girona being used as a polling station, and in the hillside villages of Aiguaviva (Girona province) and Fonollosa (Barcelona province). Human Rights Watch received other allegations and purported evidence of police ill-treatment, which it has not been able to verify or examine in detail, along with instances of assaults on police officers by some demonstrators.

Footage and photos published by the media and uploads to social networks reviewed by Human Rights Watch appear to show many other instances of manifestly disproportionate use of force against people assembled peacefully in and around polling stations, expressing their political opinion, and in some cases using non-violent disobedience to obstruct police.

The Spanish government has insisted that all actions by law enforcement officers “were prudent, appropriate and proportionate to the objective of ensuring compliance with the law and the rights of all citizens,” and further said that the police actions “were not directed against citizens or their ideas.” On October 6, however, the central government’s representative in the region expressed regret and apologized for the police interventions during a television interview.

The Spanish government has an obligation to ensure that an effective investigation is carried out into the allegations of excessive use of force, including the serious incidents documented by Human Rights Watch. Given the current tensions between the central and regional authorities and complex questions of jurisdiction, Spain should consider asking for assistance from an independent international expert body, Human Rights Watch said. As of October 8, 23 different courts in Catalonia were examining allegations of police misconduct, with one investigating complaints made by 36 individuals relating to 17 sites in Barcelona.

In Girona (population 98,255), Human Rights Watch interviewed 37 people who experienced or witnessed police violence, 15 of whom showed evidence of injuries they said were due to police ill-treatment. Witnesses at the Coŀlegi Verd primary school polling station on Carrer Joan Maragall told Human Rights Watch that shortly after 9 a.m. on October 1, national police used batons and shields to charge repeatedly at a cordon of people who had linked arms to stop them entering through the school gate, hitting the protestors on their heads, arms, legs, and torsos. The police did not issue a warning before charging, and fired blanks into the air, frightening young children who were present.

Footage and evidence seen by Human Rights Watch corroborates witness accounts that once inside the school compound, national police officers struck people with batons, bruising them. One parent who reported being hit was an off-duty policeman in the Mossos, and another injured was an off-duty firefighter.

Elsewhere in Girona, at the Sant Narcís polling station, Xevi Gil Rosdevall, a 47-year-old uniformed firefighter, said his arm was broken by a police baton. He showed Human Rights Watch video of the incident that appeared to confirm that he posed no threat to police.

In Aiguaviva (population 763), Human Rights Watch spoke to several residents who experienced, witnessed, or filmed police violence on October 1. At approximately 3:45 p.m., about 50 national police entered the village where a crowd of between 70 and 100 people was assembled with a festive meal and flowers outside a polling station in the village hall.

One villager, Jaume Mas, a 52-year-old technical engineer, said he asked the police for a copy of the judicial order authorizing their entry. He says they responded by hitting the crowd with their batons. Human Rights Watch saw video and still images showing a national police officer using a canister of irritant spray around Mas and others nearby, when they presented no imminent danger.

A 38-year-old man who wished only to be identified as “Ramon” for fear of reprisals, told Human Rights Watch he was struck by police on October 1 as he was filming their seizure of ballot boxes in Aiguaviva. Footage shows a policeman hitting the arm holding the camera twice. Subsequent footage shows police pushing Ramon out of the village hall and him landing 4 or 5 meters across the stone paving of the village square. The incident took place after police had secured the ballot box and voting papers. Ramon said he was left with bruising or swelling on his right torso, neck, left leg, left hand, and throat, and showed Human Rights Watch his medical report and some of his injuries.

In Fonollosa (population 1,401), Human Rights Watch interviewed six residents, including the mayor, three of whom said they were among those injured by police on October 1. The villagers said they had set up hay bales decorated with flowers as a symbolic barrier at the largest of the three polling stations in the area. They explained their shock at the arrival at about 1:30 p.m. of what they estimated to be 70 police officers led by Civil Guards, including plainclothes officers who seized ballots and boxes.

Magdalena Clarena, 70, told Human Rights Watch she was picked up and thrown to the ground by two Civil Guards after refusing to move from her chair, which was blocking the path to the polling station. She then felt someone else land on her, and her wrist broke under the weight. Video footage shows Clarena being thrown on the ground and Jordi Puig de Llivol, a 31-year-old auto-service technician, being thrown on top of her.

A 42-year-old mechanic who asked to be identified only as “Francesc” reported being picked up by four guards, carried across the square, dropped to the ground, forcibly restrained, punched, and kicked in the head, even though he was not blocking their entrance to the hall. Human Rights Watch has seen their injuries and footage from multiple angles and medical reports that corroborate their accounts.

Spain is a party to the European Convention on Human Rights as well as the International Covenant on Civil and Political Rights, which impose specific obligations with respect to the right to peaceful assembly, freedom of expression, and use of force by law enforcement. Spain must ensure that people enjoy the right to peaceful assembly and can express their opinions freely. While the government can impose some restrictions on those rights, measures must be necessary and proportionate for a legitimate aim. Even where people may be acting unlawfully, the state cannot deprive them of their rights, or use excessive force.

Human rights standards on the use of force require police to use alternatives to force wherever possible. Spanish law governing the Civil Guard and the National Police Corps, and the latter’s ethical code, incorporate human rights norms and are clear that where force is considered necessary, police should exercise restraint and act proportionately to the threat posed, and seek to minimize damage and injury. As the political tensions between Catalonia and the Federal government continue, it is essential that any future police deployment adheres strictly to these standards. The institutions of the European Union and EU member states should also publicly make clear to the Spanish authorities that any force used by police has to comply to national and European human rights laws.

“At such divisive times it is especially important that authorities respect human rights, including freedom of speech and assembly, and the rule of law,” Raj said. “Pledges from Madrid and Barcelona to cooperate fully with an independent investigation into the violence on October 1 would be an important step towards restoring confidence and trust.”