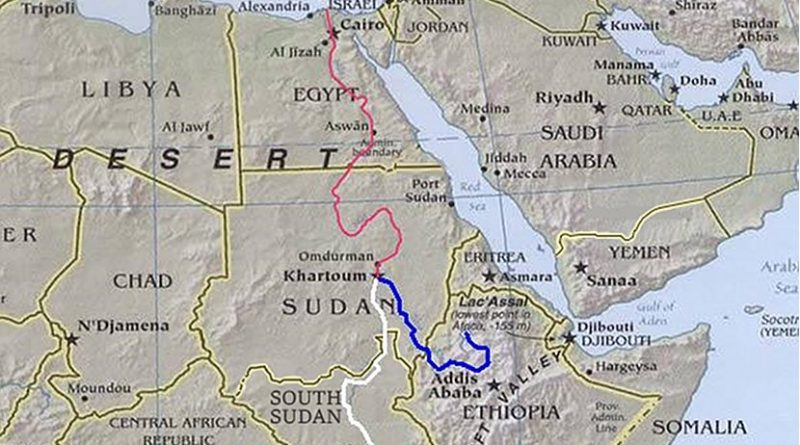 The Nile, its tributaries, and the countries of the region. Source: Wikipedia Commons.

Earlier last month during the Sochi Summit, Ethiopian Prime Minister Abiy Ahmed and Egyptian President Abdel Fattah el-Sisi agreed to resume talks surrounding the Grand Ethiopian Renaissance Dam (GERD); a project that has increased tensions and hostilities between Egypt, Ethiopia, and Sudan since the beginning of its construction in 2011. On November 6, Egyptian foreign minister Sameh Hassan Shoukry, Ethiopian foreign minister Gedu Andargachew, and Sudanese foreign minister Asma Mohamed Abdalla attended a meeting in Washington, with hopes of easing these tensions and encouraging cooperation, in order to reach decisions regarding how the dam will function and the impact it will have on the water supply of each country. The meeting was spearheaded by US Treasury Secretary Steven Mnuchin, with US President Donald Trump and World Bank Group President David Malpass also in attendance and acting as mediators for the discussions.

The tone of the meeting was positive, with the official statement released by Mnuchin and Malpass stating that the three countries “reaffirmed their joint commitment to reach a comprehensive, cooperative, adaptive, sustainable, and mutually beneficial agreement on the filling and operation of the GERD,” setting January 15, 2020 as the deadline for the countries to reach an agreement. The statement also noted if an agreement is not reached by this date, all parties agree to invoke Article 10 of the 2015 Declaration of Principles, a move that would require an international mediator to help resolve the dispute.

Additionally, in order to meet the January 15 deadline, the foreign ministers have agreed to attend two more meetings in Washington on December 9 and January 13, to assess the progress of their negotiations, as well as hold four technical governmental meetings with the water ministers of each state. The countries, along with the US and World Bank, are optimistic the combination of inter-state and domestic discussions will allow each country to not only understand their own needs better, but also the needs of the other two states.

While at first it seems odd the United States so quickly offered to not only host but mediate the discussions, upon further analysis this offer makes sense, given the countries’ important implications for US interests abroad. Having been plagued by political unrest and instability for over a century, and with the GERD heightening tensions in more recent years, the Nile Basin is a high-risk zone for violent conflict and proxy wars, and as this risk increases, the region is becoming more vulnerable to jihadi extremist groups. Given its gains in fighting this particular movement with the recent killing of IS leader Abu Bakr al-Baghdadi, the Trump administration is highly concerned with the increase in hostilities and its ability to serve as a breeding ground for extremist and rebel groups. Therefore, the Trump Administration remains highly invested and committed to helping these three countries reach an agreement as soon as possible.

All parties seem publicly hopeful an agreement can be reached, and the Trump administration is confident in their abilities to navigate such a complex issue; however, as discussions resume, so too do fears of repeating old patterns. As always, Egypt is concerned that the filling of the dam will further restrict its already scarce water supplies, on which the country is almost entirely dependent, with Sudan sharing similar fears given its geographical location in relation to the river’s natural flow. Ethiopia on the other hand, being the least developed of the three countries maintains that the hydroelectric dam, which will be Africa’s largest, is crucial to the country’s economic development, and without it, the country is unable to advance and support its population. Moreover, despite Egypt making strides towards greater cooperation, Egyptian representatives continue to assert that while the developmental interests of Ethiopia should be taken into consideration, Egypt’s historical rights to the Nile’s waters remain strong and effective reasoning in favor of Egypt receiving a majority of the waters – something Ethiopian officials have labelled as “unjustified” and disruptive to the “positive spirit of cooperation.”

As the three countries continue to navigate through this nuanced and long-standing conflict, one thing is certain: there will not be peace in the basin until negotiations are held and an agreement is met. Whether that is done exclusively through tripartite discussions as per Ethiopia’s preferred course of action, or through external mediation as Egypt has requested, the Nile Basin is slowly but surely moving toward greater instability as the conflict is prolonged. While it remains unclear how talks will progress at the December 9 and January 13 meetings, or whether an agreement will be met by the January 15 deadline, this meeting in Washington was a step in the right direction. The resolution of this conflict is expected to continue on a positive trajectory so long as the countries continue working toward their shared interest in reaching an agreement and acknowledge the significance of the Nile to the development of all basin states.