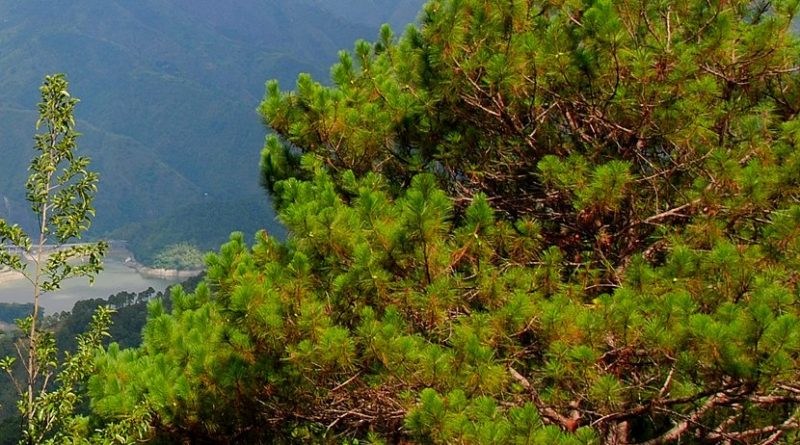 A reforestation model here transforms ravaged land into forests, wildlife habitat and nature school, an answer to the problem of yearly massive landslides in the country and elsewhere in other mountainous regions in Asia.

Countries like the Philippines, Nepal, and China suffer hundreds of deaths and lose millions of dollars worth of properties yearly due to landslides mostly man- caused like deforestation.

Perched on a mountaintop with a slope of more than 18 percent slope, it is protected by some 3,000 pine trees, and about three dozen species of native trees, shrubs, bamboo and grass species.

Description of The Habitat Model

The Habitat is a modified version of the indigenous agroforestry system of the Ifugaos called muyung or lakon following some scientific principles in permaculture and agroforestry. Instead of dipterocarps, pine trees are planted in the woodlot on top of the mountain.

This serves to protect the whole mountain in times of heavy rain by absorbing much of the rainfall, rather than the water cascading down the slopes, normally eroding topsoil and causing landslides.

Three thousand pine trees , now more than 30 years old cover the Habitat. The trees also cushion the impact of rainfall, preventing top soil erosion, with the tree branches, twigs and needles absorbing the torrential raindrops and letting these drop softly to the ground. The water absorbed gets into the ground water raising the water table which feeds the spring that supplies water all year-round.

Excess water is absorbed by the trees, each mature tree absorbing as much as 200 liters by its water roots, which the tree releases during summer to recharge brooks and springs.

Below the woodlot is a belt of native stick-like shrub called Mescanthus chinensis called locally as rono with deep penetrating roots. These serve as a buffer zone to prevent water , not absorbed by the woodlot and topsoil, from eroding to the lower slopes of the mountain. Rono is harvested rampantly by vegetable bean and pea growers as trellis, making it an endangered species under the IUCN Red Handbook.

Five meters below the Mescanthus chinensis buffer belt is a cross canal or swale is dug at a depth of one foot to capture flowing water not stopped by the woodlot and rono line and drains to a creek. For every ten meters of the canal is a check dam made from branches and soil trap two feet deep to capture soil and prevent it from being washed away.

Cross canals or swales can be dug after every twenty meters of a mountain slope. As many as 20 check dams and soil traps may be dug in a one hectare sloping land.

Below the cross canals, hedges of Flemingia macropylla are planted to reinforce soil conservation efforts. F. macrophylla have long, tough tenacious roots that penetrate the soil even 20 feet below, making them effective soil binders.

At the Habitat, natural gullies were staked with bamboo poles as soil traps and planted with trees. The trapped nitrogen, phosphorus and potassium-nutritious top soil accumulated and fertilized the trees allowing fast tree growth.

Some 30 to 40 meters from the woodlot is the agroforestry area planted with 2,000 Arabica coffee trees shaded by nitrogen- fixing trees Calliandra calothyrsus and Alnus japonica, both introduced species.

These trees fertilize the coffee by making atmospheric nitrogen available in the soil as nitrate through nitrification process performed by the Rhizobiumbacteria found in the root nodules of the trees.

The Habitat has served to train environmentalists and tree growers through the past years. It accommodated students, and pupils, teaching them the importance and uses of trees and plants. It taught wild food, medicinal plants and forest survival practices. It is managed by the Cordillera Ecological Center where it trains foresters and rural development workers.

George Facsoy who worked with the Laos government ministry of forestry honed his skills at the Habitat, so did Jose Bandiwan, an apiculturist in New Zealand.

“I first learned about bees at the Habitat, the trees and wild plants they forage on. We planted hundreds of Calliandra trees upon discovering bees love the flowers. By doing so, we prevented the death of thousands of bees because these did not have to forage nectar on vegetables laced with dangerous chemicals,” Jose explained to a group of visitors at the Habitat.
Jose also experimented successfully in the growing of native trees using asexual methods at the Habitat. “We popularized nitrogen fixing trees at the Habitat, making use of Calliandra calothyrsus, Flemingia macrophylla and Rensonii not only because of their ability to fertilize but also because of their capability to stop erosion and landslides,” forester George divulged to a group of forestry trainees.

“It is here where we discovered the best to plant to prevent erosion is Flemingia macrophylla,” he bared. Flemingia macrophylla is woody leguminous shrub with multipurpose for crop improvement, fodder, dyes and for various therapeutic purposes. Its use and importance as effective erosion control and bio-engineering material has never been tried before and discovered only by the Cordillera Ecological Center after several trials at the Habitat.

Putting the Model to Work

In 2012, the Cordillera Ecological Center (CEC) was invited to put its model to work by a daunting challenge—stop the sinking and erosion of a mine devastated community in Mankayan, Benguet where the mining company Lepanto Mining Corp. Inc. Is located.

Using its experience in establishing the Habitat, immediately CEC and its partner A Tree A Day with some 200 volunteers went to work for four years. The eroded area, about 50 hectares was successfully rehabilitated, the sinking stopped, erosion and landslides were arrested. Most importantly, a forest was established and turned over to the local high school, In 2015, the community adopted the forest as its communal forest and took over the responsibility in caring and protecting it.

CEC replicated its work in the eroded bald mountains in Marilog, Davao del Sur working with Matigsalog Lumads, and other towns in Benguet like Bokod Tuba and Kabayan. Every year, CEC raises thousands of trees and with the help of volunteers, replant ravaged mountains every rainy season.

A Healing and Transforming Forest

From its lowly purpose to showcase the relevance of trees, the Habitat is evolving as a haven for nature learners, bird watchers, people seeking healing from nature, those escaping the stress of city life and people wishing to commune with God.

“I love the silence, the wild beauty of trees blending naturally with the grass, praying here removes my stress and makes me feel closer to God”, Pablo Mencio, an accountant of an EPZA-based multinational firm said.

Children are the frequent visitors, sometimes they come in droves. Norma Besmi, a teacher from a government school let her pupils ran and frolic under the pine trees freely.”These children barely have a chance to play under trees, some like those living in the city have never seen a forest. We hope to come next time and camp, ” she said.

But Richard Botengan, former administrator of the Cordillera Ecological Center frowns at the idea of opening the Habitat to the public.”Too many people will disturb the balance”, he said. “The birds, insects and other small wildlife will be disturbed by the noise of people, the trails will harden from too much walking, some plants, important in many ways, are trampled on”, he quipped.

This led to the decision to open the Habitat only from November to April every year to allow plants to grow wildly, insects to pollinate freely, for migratory birds to rest without being disturbed, and for nature to take its course.

Perhaps a statement from a visiting sick woman summed up why some people want to see this forest.”I wanted to see the trees but I ended up seeing myself, for how can we truly see ourselves if we live apart and not a part of the trees and plants around us, I thank God for opening my eyes, we have been living apart from nature