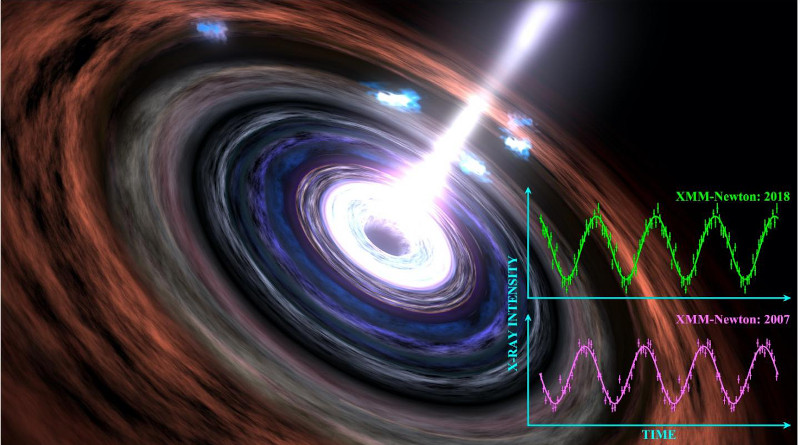 The first confirmed heartbeat of a supermassive black hole is still going strong more than ten years after first being observed.

X-ray satellite observations spotted the repeated beat after its signal had been blocked by our Sun for a number of years.

Astronomers say this is the most long lived heartbeat ever seen in a black hole and tells us more about the size and structure close to its event horizon – the space around a black hole from which nothing, including light, can escape.

The research, by the National Astronomical Observatories, Chinese Academy of Sciences, China, and Durham University, UK, appears in the journal Monthly Notices of the Royal Astronomical Society.

The black hole’s heartbeat was first detected in 2007 at the centre of a galaxy called RE J1034+396 which is approximately 600 million light years from Earth.

The signal from this galactic giant repeated every hour and this behaviour was seen in several snapshots taken before satellite observations were blocked by our Sun in 2011.

In 2018 the European Space Agency’s XMM-Newton X-ray satellite was able to finally re-observe the black hole and to scientists’ amazement the same repeated heartbeat could still be seen.

Matter falling on to a supermassive black hole as it feeds from the accretion disc of material surrounding it releases an enormous amount of power from a comparatively tiny region of space, but this is rarely seen as a specific repeatable pattern like a heartbeat.

The time between beats can tell us about the size and structure of the matter close to the black hole’s event horizon.

Professor Done said: “The main idea for how this heartbeat is formed is that the inner parts of the accretion disc are expanding and contracting.

“The only other system we know which seems to do the same thing is a 100,000 times smaller stellar-mass black hole in our Milky Way, fed by a binary companion star, with correspondingly smaller luminosities and timescales.

“This shows us that simple scalings with black hole mass work even for the rarest types of behaviour.”

“It proves that such signals arising from a supermassive black hole can be very strong and persistent. It also provides the best opportunity for scientists to further investigate the nature and origin of this heartbeat signal.”

The next step in the research is to perform a comprehensive analysis of this intriguing signal, and compare it with the behaviour of stellar-mass black holes in our Milky Way.