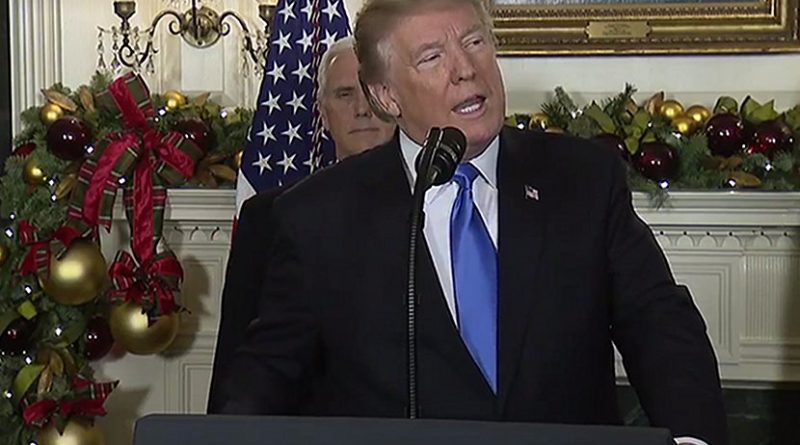 On December 8, 1941, US President Franklin D. Roosevelt addressed a joint session of the US Congress, a day after the attack by Japanese warplanes on the US naval fleet at Pearl Harbor. He described the actions of the previous day by the Japanese as a “date which will live in infamy”. The United States entered the Second World War soon after that incident.

Almost to the day 76 years later, on December 6, 2017 another US president engineered a day which will live in infamy in the hearts and minds of all Palestinians everywhere when he unilaterally decided to move the US embassy from the Israeli capital of Tel Aviv to the holy city of Jerusalem, a city long contested by both Palestinians and Israelis and whose final status has yet to be determined by a world forum.

Perhaps President Donald Trump wilted in the face of a persistent Zionist buildup of pressure to appease the territorial-hungry Israeli Prime Minister Benjamin Netanyahu whose voracious appetite for Palestinian land has opened the floodgates of illegal settlements by imported Jews. Hundreds of thousands of Palestinians have been illegally forced off their land and displaced, their homes bulldozed, their farms burnt to the ground and for many a bullet in the back or head. Trump’s decision was undoubtedly fueled by his son-in-law and senior advisor, Jared Kushner, who was recently brought to notice for failing to disclose to the federal government his position as the co-director of a foundation that funded an Israeli settlement considered to be illegal under international law. Mike Pence, the evangelical vice-president, must have also played a part.

But it is not to the Palestinians alone that December 6 will be a date that will live in infamy. It is to Arabs, Muslims and freedom-loving people everywhere around the globe who sympathize with the plight of the Palestinians who have been undergoing a slow and measured holocaust designed to eliminate them.

Following the announcement, the Kingdom expressed “great disappointment” over US President Donald Trump’s recognizing Jerusalem as the capital of Israel and relocating the US embassy there. In fact, King Salman himself had publicly warned Trump days before the announcement that moving the US embassy to Jerusalem was a “dangerous step” that could rile Muslims worldwide.

The Royal Court said that the Saudi leadership had previously warned Trump of the serious consequences of such an “irresponsible and unwarranted step and that “the Kingdom expresses its denunciation and deep regret that the (Trump) administration has taken this step, as it represents a great bias against the historic and permanent rights of the Palestinian people in Jerusalem, which have been affirmed by the relevant international resolutions and have been recognized and supported by the international community.”

The Royal Court added that while Trump’s move does not weaken the “inalienable and preserved rights of the Palestinian people in Jerusalem and other occupied territories,” it does “exemplify a drastic regression in the efforts to move the peace process forward. This decision is a shift away from the historically impartial position of the Untied States with regard to the issue of Jerusalem, which will further complicate the Palestinian-Israeli conflict.”

Perhaps Prince Turki Bin Faisal spoke for all of us best when he admonished Trump recently with a blistering: “Our King, Crown Prince, government and people condemn your act and our King advised you to retract it. For the sake of world peace and security, I hope that this time you listen to his advice.”

He continued: “No, Mr. Trump. How can you call for calm, moderation and for the voices of tolerance to prevail over the purveyors of hate when your act is the balm on which they thrive? It is the sustenance on which they feed. It is the oxygen which they breathe. Forget whatever sweet words you blandish at us. Native inhabitants of what is called America have coined the phrase ‘White man speaks with forked tongue’. We have known that phrase since 1917.”

This article was published at the Saudi Gazette.

Home » A Day That Will Live In Infamy – OpEd