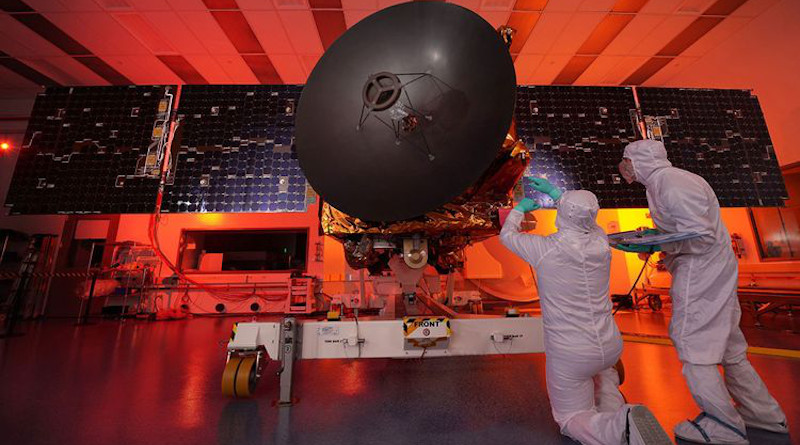 The UAE is sending a probe to Mars. It is a stunning and historic event that needs to be understood and engaged with properly to produce maximal benefits.

Most of the world looks at this mission in pleasant surprise because the UAE is a newcomer in space exploration, where until now only big players ventured. But, from within the Arab world, many look in bewilderment because they find it difficult to understand why huge resources (financial and human) are being spent on a project that doesn’t seem to have any direct benefits.

Indeed, the utilitarian standpoint is so prevalent in the Arab world that, 10 days ago, I took part in a panel titled “Why spend money on space science?”

This is a question I am asked time and again.

To bring out the main idea behind this mission, I often stress the parallels between John F. Kennedy’s “to the moon” speech in 1962 and the UAE leadership’s announcement of the Mars mission in July 2014. Kennedy famously said: “We choose to go to the moon in this decade… not because (it is) easy, but because (it is) hard, because that goal will serve to organize and measure the best of our energies and skills.”

To me, the main objectives behind this big national initiative are more strategic than scientific. Indeed, this project will turn everyone’s attention, particularly students’, to space, science and technology in the UAE and the Arab world.

A study in 2003 showed that, in the decade following Kennedy’s announcement and challenge, the number of doctorate holders in the US tripled in the physical sciences and quadrupled in engineering. And a survey in 2009 found that 50 percent of the internationally renowned scientists who published in the top journal Nature had been inspired to become scientists by the US moon program.

Furthermore, I remind people that, in addition to 10 research centers, NASA has 75 educational programs and that, so far, at least 3 million teachers and 45 million students from 44 countries have participated in experiments and activities associated with the International Space Station.

When people ask me “but why Mars?” I either reply “because it’s there” (for those who get the reference) or “because it’s hard.” In fact, it is not about Mars; if it were, the UAE government would have just directed its ministries to set up big collaborations with NASA, the European Space Agency or other space players. It is about capacity building. And no long-term development program is a waste.

Still, I believe that the program can achieve greater objectives than the above lofty goals. It can boost basic and applied science and knowledge-based development across the Arab world.

How could that be achieved? First, Arab scientists, decision-makers and opinion-makers need to embrace the exploration aspect of this mission. The technologies behind the Hope probe may end up improving our cities, roads or health facilities, but only indirectly and in the long run. But the mission will immediately boost people’s interest in basic science and research, which will lead to progress, if not for our children, then for our grandchildren.

Secondly, we need to widen the impact of this mission to the whole Arab region. Each major Arab university should set up an astronomy and space science department and degree program. Right now, there are very few — too few — such departments and programs. If half a dozen Arab countries already have a space agency and their own satellites, sometimes built in-house, it should not be too difficult to convince budget-fixated governments to create departments that will train students in both applied space science (e.g., remote sensing) and astronomy (Mars and beyond).

And to complement that, every Arab country should build an astronomical observatory, where graduates will work and produce rich science. This will help achieve a goal that the UAE President Sheikh Khalifa bin Zayed Al-Nahyan expressed when he announced the Mars mission: “We will prove that we are capable of delivering new scientific contributions to humanity.”

There is no doubt that the mission will generate unprecedented excitement among millions of people, both in the region and probably worldwide.

Various activities are being planned around both this week’s launch and the arrival at Mars (next February) of the probe. But we must not let media and popular excitement satisfy us and be a gauge of success; we must remain focused on the educational and strategic objectives.

The Hope mission to Mars can be truly transformative if everyone aims as high and wide as possible. Let us use this historic opportunity to build space science capacity in Arab universities, in observatories, and in research centers, by bringing Arab (and non-Arab) scientists together, by strengthening regional and international collaborations, and by showing Arab youngsters that science is a doorway to a bright future.