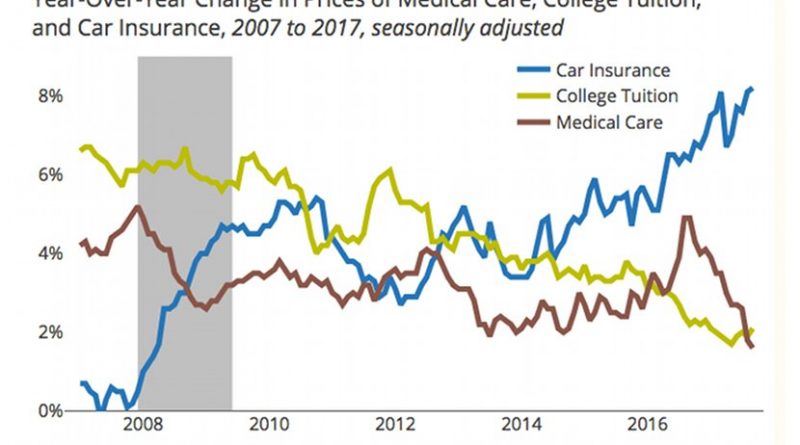 A 13.1 percent increase in gas prices led to a 0.5 percent jump in the CPI in September. The September increase brings the year-over-year increase in the overall CPI to 2.2 percent. However inflation in the core index, which excludes food and energy, rose just 0.1 percent, putting the year-over-year increase in the core at 1.7 percent. The annualized rate in the core, taking the average price level over the last three months (July, August, and September) compared with the prior three months (April, May, and June), is also 1.7 percent.

As has been the case for the last couple of years, even the modest rise in the core CPI is driven primarily by shelter costs. The core CPI, excluding shelter, rose only 0.6 percent over the last year.

The rate of inflation in shelter costs did slow slightly in September. After jumping 0.4 percent in August, the rent proper index rose 0.2 percent last month. It is up by 3.8 percent over the last year. The index for owners’ equivalent rent also rose 0.2 percent in September, after rising by 0.3 percent in August, bringing its year-over-year increase to 3.2 percent. Both indexes had shown some signs of slowing before the August jump. With vacancy rates edging somewhat higher over the last year (7.3 percent for the second quarter of 2017 compared with 6.7 percent in 2016), there is reason to believe that rate of increase in shelter costs may slow further.

A largely overlooked item that has been a major factor in inflation is auto insurance, the price of which rose 0.5 percent in September. Auto insurance prices have risen by 8.2 percent over the last year. This is actually an important component of the CPI, accounting for 2.6 percent of the overall index. This is less than the 6.7 percent weight for medical care services, but far more than the 1.8 percent weight for college tuition.

An anomaly on the low side was a 0.6 percent drop in prescription drug prices. This index is up by 1.4 percent over the last year. It is important to note that this index will not pick up most of the rise in drug prices since it measures changes in prices of existing drugs. Most of the increase in drug costs is due to new drugs being introduced at high prices.

It is difficult to find any evidence in this respect of accelerating inflation. The rise in gas prices that led to the jump in the overall CPI for September is likely in part driven by a temporary loss in refinery capacity due to Hurricane Harvey. It will likely be reversed and certainly not repeated. The producer price indices also show no evidence of price pressure at earlier stages of production. There is little reason to expect core inflation to reach the Fed’s 2.0 percent target in the foreseeable future.