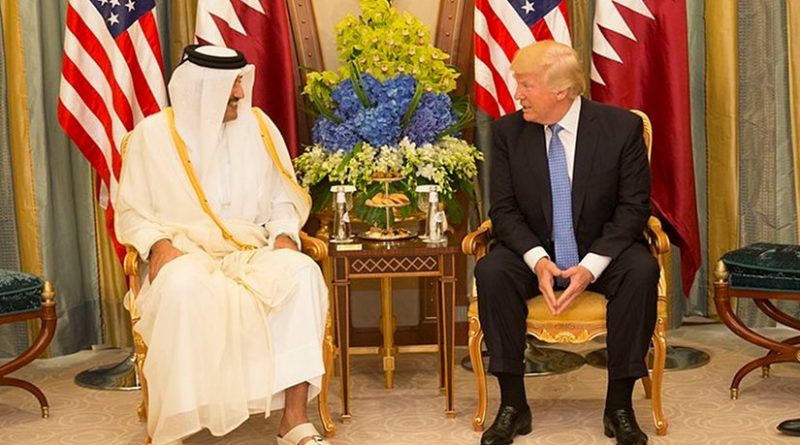 Tensions are soaring in Qatar’s relations with Saudi Arabia and some other Arab states in the Persian Gulf. Following a spate of verbal and media contentions during past weeks, Saudi Arabia finally decided last Monday to cut all diplomatic ties with Qatar. Following suit with Saudi Arabia, Bahrain, the United Arab Emirates, Egypt, Yemen and a number of other countries severed their relations with Qatar as well. Pressures mounted on the Qatari government did not remain limited to severance of political relations and included banking and trade relations as well. As a result, the aforesaid countries banned any form of trade exchanges with or use of their seaports and airports by Qatar. Saudi Arabia even gave Qatari nationals 14 days to leave its soil while warning its own nationals that they would face three years in prison and a fine of 10,000 Saudi riyals if they traveled to the neighboring Qatar. Saudi Arabia has also warned that it may oppose the Qatari gas crossing its soil.

These conditions have led to one question: What would be the future outlook for this crisis? The answer is that according to the available evidence, a dangerous scenario is in the offing for Qatar and it seems that the main goal pursued by Saudi Arabia and its allies is to change the Qatari government, or at least its policies, through a domestic coup d’état or foreign aggression.

In reaction to the ongoing crisis in Qatar-Saudi ties, most regional and extra-regional countries, including Iran, Turkey and France, have expressed concern and called for peaceful resolution of differences through negotiations. Meanwhile, Kuwait has proposed to mediate between the two sides, which has been welcomed by Qatar as well, while Pakistan has not taken a clear-cut position yet and Iraq has decided to remain impartial.

In his first reaction to the new political crisis in the Persian Gulf, US President Donald Trump took to Twitter, noting that during his visit to the Middle East, he had urged for an end to funding extremist groups and Arab leaders had pointed to Qatar. He tweeted, “So good to see the Saudi Arabia visit with the [Saudi] King and 50 countries already paying off. They said they would take a hard line on funding extremism, and all reference was pointing to Qatar. Perhaps this will be the beginning of the end to the horror of terrorism!” Such remarks by Trump point to his implied agreement to the measure taken by Saudi Arabia and its allies in severing ties with Qatar and mounting pressure on that country. If this is the case, then it must be noted that a very dangerous scenario is in the offing against Qatar.

Of course, differences between Saudi Arabia and Qatar have a long record, but the existing conditions show that the ongoing crisis is somehow different from previous ones and it will not be easily resolved. It is the first time that Saudi Arabia and its allies have decided to cut all ties with Doha and close their land, sea and air borders to this country. Adoption of such decisions in international relations usually means that one side is ready for showing the most intense reactions. However, in view of Qatar’s early reactions, it seems that the country’s Emir is not willing to backtrack in the face of Saudi Arabia and its allies. On the other hand, it does not seem possible for Saudi Arabia to get along with Qatar’s Emir Tamim bin Hamad Al Thani, because if this was going to be the case, the dispute would have subsided after the Qatari government denied the remarks, which were attributed to the Qatari Emir, on several occasions, and would not have reached the present climax.

Saudi Arabia has been able to take two important measures in the past couple of months. First of all, it has managed to shift Donald Trump’s focus from Riyadh to Tehran as the main factor of instability in the region and the main supporter of terrorism. During his election campaign, Trump clearly took Saudi Arabia to task, describing that country as supporter of terrorism and the main factor of instability in the region. However, during his first foreign trip, which took Trump to the Middle East, he described Iran as the main factor of instability in the region and called for a coalition of Muslim countries to be formed against Iran. The second measure taken by Saudi Arabia was to shift Trump’s viewpoint about the main financier of terrorism from itself to Doha. Of course, Qatar has been financially and politically supporting the Jabhat al-Nusra [the al-Nusra Front, which is currently called Jabhat Fateh al-Sham (the Levantine Conquest Front)] in Syria, but there is no doubt that the main source of support for terrorism in the Middle East is Saudi Arabia and the extremist ideology, which is harbored by this country.

Therefore, it can be predicted that in view of the green light shown by Trump, during coming days, we may either witness a coup staged in Qatar in order to change its government, or will see a military assault launched by Saudi Arabia and its allies against this country. A domestic coup would not be necessarily guided from outside of the country, but other powerful groups in Qatar may stage a coup to end the crisis if they see the country in more dire straits. On the other hand, prolongation of the crisis will increase discontent among people and tilt the balance in favor of those who are opposed to the incumbent government. Therefore, a coup d’état would be launched in order to change the government in Qatar and end the current crisis. From this viewpoint, the next person that would hold the reins of power in Qatar must be in line with Saudi Arabia’s policies.

However, if domestic conditions in Qatar prevent a coup, then the possibility of a military attack by Saudi Arabia and its allies against this Arab country would increase. Such attack could be conducted by Saudi Arabia, the United Arab Emirates, and Bahrain in cooperation with Egypt. The military assault would also seek to change the ruling government in Qatar or change its regional policies. Of course, military attack on a member of the (Persian) Gulf Cooperation Council by its other members would cast doubt on legitimacy of this institution. Due to this reason, perhaps a domestic coup in Qatar would be the best option for Saudi Arabia. However, one way or another, Riyadh seems to believe that this crisis should end in a way that would be beneficial to Saudi Arabia.