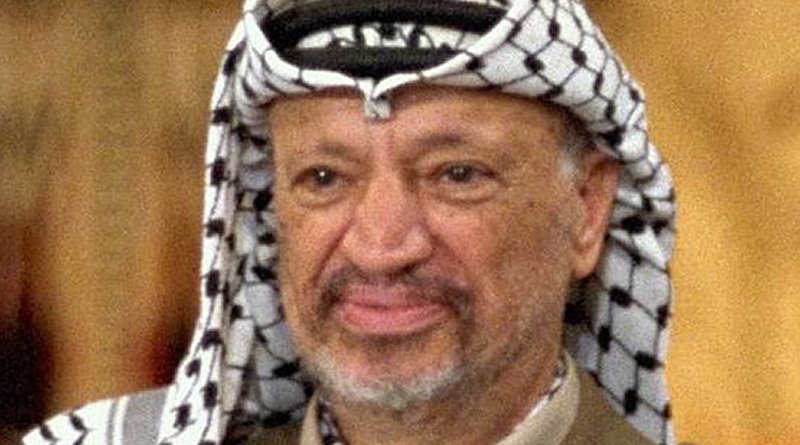 Fifteen years after the passing of Yasser Arafat, the Palestinian people continue to reflect on their former leader’s legacy. Thousands of images of “Abu Ammar” have been shared across numerous social media platforms this week in remembrance of a man whose nom de guerre has been affiliated with the Palestinian struggle for decades.

Arafat’s legacy, however, is a contentious subject. The deep sense of loyalty that many Palestinians feel toward him is admirable but also worrying. This creates a dilemma: How is one to honestly dissect the history of a man whose status among many Palestinians has been elevated to that of an infallible warrior?

Considering that the current Palestinian generation is suffering the consequences of a checkered past — one that was partly molded by Arafat himself — examining Abu Ammar’s successes and failures is more critical than ever before.

One can honestly say that it was Arafat and his generation of Palestinian leaders and intellectuals that helped resurrect the Palestinian national identity after the humiliating Arab defeat by Israel in the June 1967 war. Prior to that date, the Palestine Liberation Organization (PLO) was neither truly Palestinian nor a genuinely revolutionary force.

Arafat, throughout the 1960s and 70s, used the Fatah party he founded and the PLO to establish a large array of alliances throughout the Southern Hemisphere. This made the image of Arafat, wearing his black and white keffiyeh, a recognizable brand from Chile to South Africa and from Iran to China.

But Arafat is also responsible for many of the ailments that continue to plague Palestinian society and hamper the Palestinian cause to this day. In fact, much of the widespread corruption, many failures and the absence of democratically run institutions in Palestine are rooted in the very system of political patronage created by the late leader.

From the onset, back in the mid-1960s, Arafat and a small clique of Fatah members tried to dominate the PLO and, by extension, all Palestinian national and political institutions, including the Palestine National Council and the PLO’s Executive Committee. The former served as a Palestinian parliament-in-exile and the latter became the executive branch of a government-like structure. While Arafat assigned most of the top positions to himself, his allies were strategically allocated roles in all branches of Palestinian political life.

Under Arafat, the PLO operated according to the most minimal standards of democracy. Throughout his political career, whether in exile or following his return to Gaza in 1994, he labored to appear politically inclusive. In reality, Arafat shrewdly managed all Palestinian political affairs without any margins for meaningful dissent. Under immense US and Israeli pressure, Arafat and his Palestinian Authority (PA) cracked down on all political parties that rejected the PA’s subservience to Israel and its “peace at all costs” approach.

Unlike the current leader of the PA and PLO, Mahmoud Abbas, Arafat was at least genuine in his desire to establish Palestinian political unity. However, the unity he envisaged seemed to imply a united front behind him and the political agenda of his choosing. Palestinians continue to suffer the consequences of this misconstrued notion of “unity” — agreeing to a singular political agenda, as opposed to uniting within a single democratic political institution. Arafat could neither achieve the former nor secure the latter.

The shortcomings in Arafat’s leadership were further amplified following his death. With no true democratic institutions that would permit Palestinians to sort out their many differences, Abbas, Arafat’s heir to the PA/PLO throne, used his position to accumulate wealth, prop up his cronies and insist on his complete dominance over all Palestinian affairs.

On numerous occasions, Arafat dared to challenge Israel. His years-long besiegement in his office in Ramallah — prior to his death from a “mysterious blood disorder” — was testimony to Israel’s loathing of the Palestinian leader. However, it was the skewed political structure Arafat created that emboldened the aging Abbas in his drive for political supremacy. Indeed, Abbas has single-handedly squandered all Palestinian national achievements, including the PLO itself as a unifying political platform.

Fifteen years on from his death, it has become clear that the lack of a meaningful Palestinian political dialogue under Arafat led to the weakening, fragility and systematic dissolution of the Palestinian national project. If Arafat had allowed for the development of a healthy Palestinian democracy, the Oslo Accords would have never been signed. Thanks to Oslo, Palestinians are now as much trapped in a political maze of unfulfilled agreements and broken promises as they are imprisoned behind Israeli walls, fences and checkpoints. While the vast majority of Palestinians continue to reel under their horrific, Oslo-induced reality, Abbas and the Fatah and PA elites enjoy the perks of their acquiescence and outright betrayal of their people.

Arafat, despite all of his political miscalculations, is still missed in Palestine. This truth is a commentary on today’s sad state of affairs. What is most ironic, however, is that today’s tragic reality is, in many ways, the direct outcome of Arafat’s legacy.