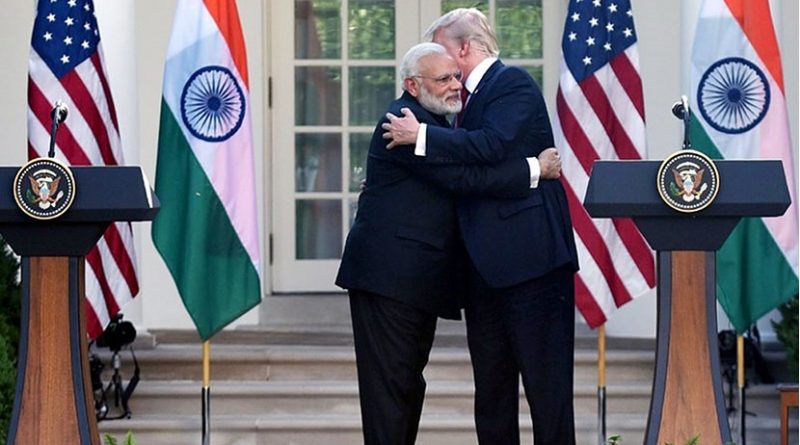 India and the United States share a robust strategic partnership and cooperation in aspects pertaining to trade, security and stability in the region, the cultural link of the Indian diaspora in the United States and shared democratic values. There are of course lingering issues in any major partnership, and the Indo – US bonhomie too has hit road bumps when it comes to trade. As I wrote earlier, this is par of the course; given President Donald Trump has been vociferous, right from the campaign trail to his ascent as commander-in-chief about the ‘art of the trade deals’.

Trump made trade and “bad trade deals”, the raison d’etre for his desire to seek the highest office in the land. Trump is presently following a path of ‘Jacksonian populism’ that is only reasonably concerned with foreign policy and believes overarchingly in inherent protectionism. Jacksonian populism is archaic and is juxtaposed with what Stephen Walt, a former professor of mine at the Harvard Kennedy School calls the Liberal Hegemony.

Walt, a renowned political scientist has described in his latest book, The Hell of Good Intentions, that the United States has long followed a path of liberal hegemony. That is, spreading what Washington sees as key economic and political freedoms across the globe. This laid the foundations for the Bretton Woods system that gave birth to multilateral institutions such as the World Bank and the International Monetary Fund. Even NATO, the epitome of transatlantic multilaterism was done to protect ‘liberal values’ against the threat of an “iron curtain”.

From the campaign trail to the “covfefe” tweets, his messaging has been consistent on one front: the United States is getting a bad deal from its allies. He has translated this to mean that the US has been fleeced by its allies, and ergo, the traditional American approach to free trade has impoverished the American steel worker in Pennsylvania and Ohio. As a result of this, his message is clear, that the United States economy has been weakened and he is a strongman leader, the messiah of deals (having written the book) and can thus secure better deals with other strongmen.

While Trump’s core base may be averse to free trade and want to eschew from trade deals such as NAFTA and TPP, Trump – however, doesn’t necessarily believe free trade is a bad thing. He demurs at the idea of working in a multilateral fashion, alluding to the belief of a classic-Hollywood 60s business style setting (think Mad Men) of two businessmen signing the dotted line over cigars and scotch (even though Trump is a teetotaler). The President doesn’t have the patience for nuances of the complicated Bretton Wood’s style of negotiations. His tweets say one thing – he prefers to be a transactional business leader, treating trade deals like real estate deals.

Where the Indo-US trade deal stands?

In 2018, it was estimated that India and the US traded goods and services worth well over $140 billion. The ambitious and tangible goal is to hit a whopping $500 billion. This as India continues to be seen as a burgeoning economic heavyweight, shaking off its temporary sluggishness. The US will want to continue its investment drive in India, largely as a part of its tilt towards the Indo-Pacific.

During the sidelines of the United Nations General Assembly Week (UNGA) Indian Commerce Minister Piyush Goyal flew to New York to conclude a trade package with U.S. Trade Representative (USTR) Robert Lighthizer. However, nothing substantial came from the meetings and the two sides failed to bridge the gap in their positions.

The announcement of an agreement was expected to coincide with the bilateral between both Prime Minister Modi and President Trump in New York itself. Trump had said he expected to have a trade deal soon and a bigger trade deal down the road.

The current issue, more specifically when it comes to trade, is that the United States and Trump feel that India is too strict on tariffs on goods coming into India, referring to New Delhi as the “tariff king”. There was the earlier issue of Harley Davidson motorbikes coming into India, and the incumbent Indian government imposing exorbitantly high tariffs that precluded entry. There has been price control on medical implants (such as knee implants and stents for the heart) that has upset many American companies looking to tap into the Indian market. There have been changes of e-commerce rules in India that have worked against American giants such as Amazon. The US has had issues pertaining to data localization and had India added to a “watch list”, which included ten other countries whose currency practices were being monitored.

The U.S. has wanted India to eliminate tariffs (20%) on Information and Communications Technology (ICT) products but New Delhi is concerned that this could open up the market to flooding by Chinese technology companies. The American side wants the removal of price caps (Trade Margin Rationalization) for its agriculture, dairy products and ICT technologies. There is also quite literally a chicken and the egg situation. A decade long dispute over American poultry or chicken legs, to be specific. India, which normally imports chicken legs (India’s chicken consumption is largely on chicken legs), banned the product in 2007 citing a precaution against avian influenza. American poultry producers were in a flux as the domestic market stateside, generally prefers the chicken breast, creating a problem of surplus.

The United States has routinely taken even the closest allies, such as Canada to the World Trade Organization’s (WTO) dispute settlement panel. It is taken as accepted even in the closest of alliances, where they spar on trade issues but continue warm diplomatic ties while trade brouhahas simmer. Last year, the US had accused India over the issue of export subsidy schemes. Washington’s claim against New Delhi was similar to what DC has long accused Chinese companies of – being detrimental to American interests. DC alleged that subsidy programs run by the Indian government were affecting American companies, which gave Indian businesses a leg up. The WTO had upheld Washington’s claims.

India has also been traditionally protective of its industries at home, and hence has been cautious of large American multinationals leaving small scale Indian businesses redundant. For long, Swedish furniture giant IKEA, was kept out of the market until last year wheen they opened their first outlet in Hyderabad, India. India wants to reinstate the preferential market access to American markets under the Generalized System of Preferences (GSP) program. The program was revoked in June, and has stalled the progress.

India wants easier access for its own agricultural products into the United States. Currently, Indian mangoes, which are rated some of the best in the world haven’t passed the US Food & Drug Administration (FDA) approval. India is also hoping for easier access for its other fruits (gapes and pomegranates) to the American market.

In light of the US withdrawing the GSP system of preferential agreement, India imposed retaliatory tariffs on 28 American products ranging from apples to engineering goods. India was not exempt in Trump’s extensive duty on certain steel and aluminum products across multiple countries. Apart from capital, New Delhi wants companies to bring in high-end technologies for its ailing infrastructure sector. There is also the sensitive and pertinent issue with reference to H -1B visas for its giant software outsourcing industry.

Overarchingly, there was a sense of disappointment that no major trade deal was announced on one of the biggest summits on the world stage (UNGA). However, a limited trade deal could be agreed upon, as the two sides have made progress in identifying and narrowing down their areas of differences. On a positive note, there has been a significant reduction in the trade deficit with the U.S despite Trump’s tariffs on steel and aluminum from the country. India, as an energy consumer is diversifying its energy imports from Iran and Saudi Arabia, and increasing its portfolio of US energy imports.

Even on defence, New Delhi has long moved away from the Cold War era of overt reliance on Soviet weaponry; with Boeing and Lockheed Martin taking significant and successful interest in the Indian market. The USTR website estimates that the US’ goods trade deficit with India was $21.3 billion in 2018, a 7.1% decrease ($1.6 billion) over 2017. Whereas, the US’ services trade deficit of “an estimated $3.0 billion with India in 2018” was “down 32.5% from 2017.” Indian commerce and industry minister Piyush Goyal is optimistic that trade talks between India and the US are on the “right track”.

In an ideal scenario, many of those closely invested in this relationship will hope to see some sort of a possible free trade agreement (FTA) between US and India to address all issues concerning a two-way trade. This isn’t totally out of question, as Trump had alluded to a possible agreement with India in 2018. In some ways, India would be hoping for a similar arrangement such as the US-Japan trade negotiations. Both countries had reached an interim deal on tariffs and digital economy—a precursor to a possible free trade agreement (FTA).

There could be some pushback for India too. The US has said that they could consider imposing India with a ‘301 investigations’ if trade irritants, (such as high tariffs and other barriers to entry) are not resolved. Under this, the White House could push for some sort of settlement with New Delhi in the form of compensation or through elimination of trade barrier. What India and the US now need is a government-to-government shared vision. One where they are in lockstep of strengthening this robust bilateral relationship and enhance the burgeoning commercial relationships for their respective private sectors. There is much to be sanguine about in the Indo-US bilateral era. Afterall, India and the United States can argue over soybeans while buying submarines.

Home » Modi, Trump And The Art Of The Trade Deal – Analysis