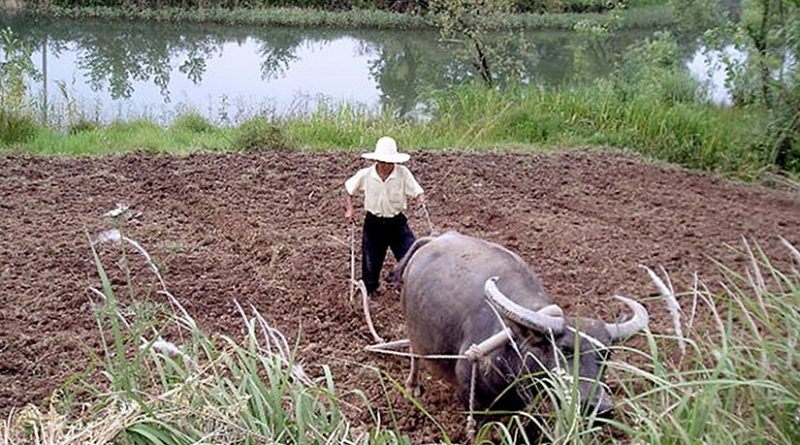 Renowned American journalist Robert D. Kaplan warned the West that, in the light of the quick deterioration of the arable land quality in interior China due to “deforestation, loss of topsoil and salinization”, when China’s population has reached “1.54 billion by 2025”, large-scale population movements from villages to cities would be “leading to a crime rate surge like the one in Africa and to growing regional disparities and conflicts in a land … as in Africa” [Note 1]. It is obviously more worrisome than the mainstream economists’ concern that China is unable to bypass the ‘middle income trap’ [Note 2].

Alongside this ‘middle income trap’ as a watershed between the rich and the poor, Kaplan highlighted “a bifurcated world” between the West and the Rest. “Part of the globe is inhabited by Hegel’s and Fukuyama’s Last Man, healthy, well fed, and pampered by technology. The other, larger, part is inhabited by Hobbes’ First Man, condemned to a life that is ‘poor, nasty, brutish, and short’.” Since “95 percent of the population increase will be in the poorest regions of the world”, “the revenge of the poor” would strike the civilized and advanced West. “Future wars will be those of communal survival, aggravated or, in many cases, caused by environmental scarcity” [Note 3].

Yes, the end of China’s ‘one-child policy’ will inevitably further stress the environment as this nation’s population was lately estimated to reach and peak at 1.46 billion by 2035 [Note 4], up from 1.37 billion now. However, China and most developing countries ranging from India to Chile and Ethiopia have been on a steady track towards stability and prosperity not by intrusion upon the West’s privileges and spheres, but by a new form of self-reliance.

Except for coffee bean and cocoa, the Western countries import very little agricultural produce from the Third World and somehow their direct investments in the irrigation infrastructure there and provision of new farming techniques  were very limited in the 20th century. Since the new millennium, the Chinese hunger for foods has dramatically changed the economic dynamics in Africa and South America. One simple story can illustrate this transformation — peanuts in the tiny African state Senegal “is becoming ‘gold’ for farmers …. ‘This is the first time that peanut prices have reached this level and it is thanks to the Chinese’ …… Peanuts … as the main cash crop in Senegal, providing jobs for 60 percent of the population” [Note 5].

China’s role in pulling the world’s underclass out of poverty is that, with its large and better educated population, it is speeding up the money velocity at an unprecedented level that it works more efficiently and effectively than the Western humanitarian aids to help the Third World develop. Simply speaking, by producing electronic devices and household items at low labor cost for the West, the Chinese sweatshop workers earn lots of US dollars but still they cannot afford the premium quality of the US produce in general and the peanuts grown in former President Jimmy Carter’s Georgia in particular. The Chinese consumers then turn to Senegal for ordinary grade peanuts and in return they sell the Africans the Chinese brands of phones and telecommunication network systems which are much cheaper than the American, European and Japanese models. When 1.3 billion Chinese consumers suddenly come into the African market to buy peanuts, new and stable demands drive production up, and the high transaction volume stirs up the money velocity within the Third World.  The more turnover a unit of money is used to buy something, the greater its velocity will be, and the quicker the economy grows but without inflation because of low wage, low rent and also low interest rate (to the credit of the Federal Reserve) [Note 6]. In the wake of the recent mild slowdown, China’s new child policy will slightly increase its population size to a new optimal level that can keep on running the fire engine for the growths of developing countries who all are seeking for better education for literacy and training for modern aqua- and agri- cultural skills.

Certainly, our Mother Nature is worried. To solve its own food shortage problem, for example, Chinese research on hybrid rice has been making breakthroughs repetitively since the 1970s. The rice yield jumped from 46 kg in 1999 to 60kg in 2011, and hopefully hit 66kg soon. Poorly endowed with less than 10% of the global arable land, China is able to feed 20% of the population on Earth. Hybrid rice is now being grown in more than 30 countries including the Philippines, Brazil, Ecuador and Guinea [Note 7].   The latest China-FAO (UN) teamwork is to transfer 25 new farming technologies on hybrid rice and other crops to small-scale farmers in Uganda, through a South-South Cooperation (SSC) agreement in Sept 2015 [Note 8].

Having brought down the mainland poverty rate sharply from 85% in 1981 to 7% in 2012, Beijing’s next goal is to lift the remaining 70.14 million peasants in rural areas all up above the Chinese poverty line of earning USD376 a year by the end of 2020 [Note 9], and also turn other Third World peoples into skilled laborers as well as consumers for the Chinese goods and services. Ethiopia, where around one million people died during its famine in 1983-5, recorded a 10.3% growth rate for 2013/14 and has been ranked by the IMF as one of the five fastest growing economies in the world, thanks to Western aid and also China’s support of Ethiopia’s “great vision to become Africa’s manufacturing powerhouse” [Note 10].

No, the increasing headcounts in the developing countries are not turning the world into anarchy. The World Bank data has solidly shown what was taking place simultaneously when the population grew by more than 1 billion — “in 2012, 12.7 percent of the world population lived at or below $1.90 a day …  down from 37 percent in 1990 and 44 percent in 1981” [Note 11]. Despite being annoyed by some militias here and there like Boko Haram in Nigeria, al-Shabab in Kenya or the Haqqani network in Pakistan, many formerly underdeveloped nations are going towards stability and prosperity steadily.

Shift of the wasteful consumption paradigm worldwide plus innovations for crops, energy and garbage are what the mankind as a whole should do to alleviate our damage to the Nature. The ‘two-worlds’ thesis between the ‘Last Man’ and “First Man’ has its own grounds and objectivity, but using this theme to ‘barbarize’ the non-Western world [Note 12] can achieve nothing except leading the Western public and politicians to the wrong direction — wars.

There are many discussions on this topic.   Here is an example:

It is a monetary economic theory.  Here is a reference:

This article appeared at FPIF.

Home » Will Scarcity Lead To Anarchy In China As Robert Kaplan Maintains? – OpEd

It is becoming increasingly evident that Vladimir Putin’s regime is utterly inept in dealing with the Covid-19 pandemic. This is