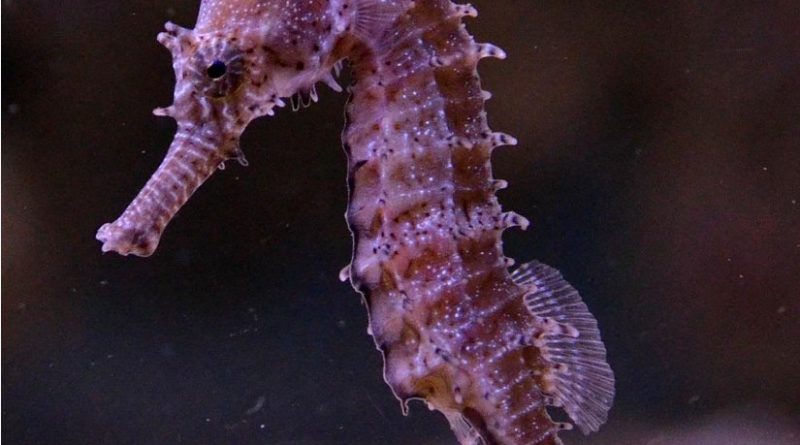 Without a doubt, the seahorse belongs to Darwin’s “endless forms most beautiful”. Its body form is one of a kind. It has neither a tail nor pelvic fin, it swims vertically, bony plates reinforce its entire body and it has no teeth, a rare feature in fish.

Another peculiarity is that male seahorses are the ones to become pregnant. The genome project, comprising six evolutionary biologists from Professor Axel Meyer’s research team from Konstanz and researchers from China and Singapore, sequenced and analyzed the genome of the tiger tail seahorse.

They obtained new molecular evolutionary results that are relevant for biodiversity research: the loss and duplication of genes as well as the loss of regulative elements in its genome have both contributed to the rapid evolution of the seahorse. The results will be published as the cover story in “Nature” on 15 December 2016.

The questions underlying genome sequencing of how diversity emerges and what its genetic basis is, can be superbly answered through the example of the seahorse because numerous unique features evolved in the seahorse within a short time. This is how the researchers around evolutionary biologist Professor Axel Meyer were able to identify the genetic basis for the disappearance of the seahorse’s teeth: several genes that are present in many fish as well humans and contribute to the development of teeth, were lost in seahorses. The seahorse no longer needs teeth due to the special way in which it consumes its food. Instead of chewing its prey, it simply sucks it in with the enormous negative pressure that it can generate in its long snout.

This same genetic forfeiture applies to genes that contribute to the sense of smell: seahorses hunt visually and have very good sight, using their eyes that can move independently of each other. Therefore, the olfactory sense seems to only play a minor role.

Particularly noteworthy is the loss of the pelvic fins. In evolutionary terms, they share the same origin as human legs. An important gene, tbx4, that is responsible for this feature, was found in nearly all vertebrates, but is missing from the seahorse’s genome. In order to test the function of this gene, a functional analysis was carried out in addition to the genome analysis. For this purpose, the corresponding gene was deactivated via the CRISPER-cas method in zebrafish, a genetic model system. As a result, these fish then also lost their pelvic fins. This proved the importance of this gene in the “normal” development of the pelvic fins.

In addition to gene losses, gene duplications during the evolution of the seahorse were also detected. When a gene is duplicated, the copy can fulfil an entirely new function. In the seahorse, this is probably how a part of the newly created gene makes male pregnancy possible. These genes presumably regulate the pregnancy, for example, by coordinating the embryos’ hatching within the brood pouch of the male. Once the embryo is hatched, the additional genes are activated. The authors of the study presume that these genes contribute to the process where the baby fish leave the male’s brood pouch.

According to this study in “Nature”, evolution does not only act through changing major roles of genes, but it also influences regulatory elements (genetic switches) during evolution. Regulatory elements are DNA segments that control the function of genes. Some of them barely change during the course of evolution since they have important regulatory functions. But several such unchanging and seemingly crucial elements are missing in sea-horses.

This is also and especially the case for elements that are responsible for the typical development of the skeleton in fish, but also in humans. This is probably one of the reasons why the seahorse’s skeleton has been so greatly modified. It lacks ribs, for example. Instead, its body is armoured with bony plates that add strength and better protection from predators.

Additionally, its prehensile curly tail allows seahorses to be camouflaged and remain motionless by holding on to seaweed or corals. The genome sequences suggest that the loss of the corresponding regulatory sequence led to this ossification.

Due to its special morphology, the seahorse superbly demonstrates how genetic changes can lead to evolutionary changes in distinguishing traits – and therefore to a better understanding of the genetic basis for the evolution of bizarre and beautiful organisms such as seahorses.

Home » The Galloping Evolution In Seahorses