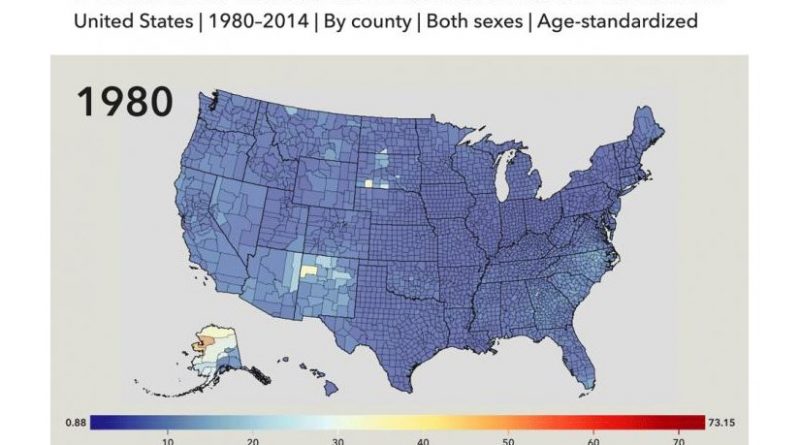 Visualizing mortality from mental and substance use disorders from 1980 to 2014 by county. Credit: Institute for Health Metrics and Evaluation

More than 2,000 US counties witnessed increases of 200% or more in deaths related to substance abuse and mental disorders since 1980, including clusters of counties in Kentucky, West Virginia, and Ohio with alarming surges over 1,000%, according to a new scientific study.

The study examines deaths in 21 cause groups, ranging from chronic illnesses like diabetes and other endocrine diseases, to infectious diseases, such as HIV/AIDS and tuberculosis, to accidents, including traffic fatalities. It explores mortality rates and how they have changed in every US county between 1980 and 2014, creating the most comprehensive view to date of how Americans die.

The study was conducted by the Institute for Health Metrics and Evaluation (IHME) at the University of Washington in Seattle, and was published today in JAMA.

Cardiovascular disease was the leading cause of death overall in the United States in 2014, but cancers were responsible for more years of life lost to early death than any other cause. Still, the rate at which Americans die from cancer and other diseases or injuries differs significantly among communities, highlighting stark health disparities across the nation. For instance, the counties with the highest and the lowest mortality rates from cirrhosis and other liver diseases were both in South Dakota, with 193 deaths per 100,000 people in Oglala Lakota County, to seven deaths per 100,000 people in Lincoln County.

“While the leading causes of death are similar across counties, we found massive disparities in the rates at which people are dying among causes and communities,” explained lead author Laura Dwyer-Lindgren. “For causes of death with effective treatments, inequalities in mortality rates spotlight areas where access to essential health services and quality of care needs to be improved.”

Other causes vary by changes in mortality rates since 1980. For example, about half of US counties saw increases in suicide and violence, while the other half of counties experienced decreases. Kusilvak Census Area in Alaska topped the list with a 131% mortality rate increase, while the rate in New York County, New York, dropped by 72% – the most dramatic decrease in the country.

Mortality rates from substance abuse – including alcohol and drug use – and mental health disorders are highly variable as well, showing the greatest increases in Clermont County, Ohio (2,206%), and Boone County, West Virginia (2,030%), and the largest drops in Aleutians East Borough, Aleutians West Census Area, Alaska, and Miami-Dade County, Florida, declining by 51% and 45%, respectively.

“The mortality trends in mental and substance use disorders, as well as with other causes of death covered in the study, point to the need for a well-considered response from local and state governments, as well as care providers, to help reduce the disparities we are seeing across the country,” said Dr. Christopher Murray, Director of IHME.