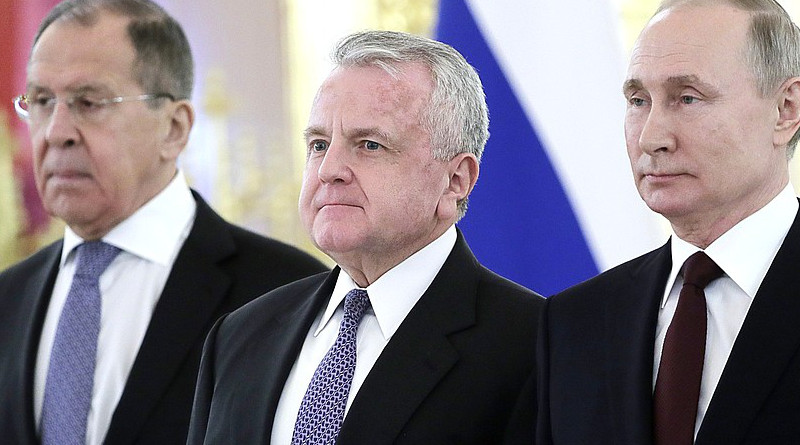 Russian President Vladimir Putin has unreservedly underlined key global challenges as threat of terrorism growing, arms control system collapsing and global economy increasingly becoming unstable, and further explained that global peace and security largely depend on the state of relations among key world powers, especially that between Russia and the United States.

“We are convinced that these relations should hinge on the principles of equality, respect for sovereignty and non-interference in each other’s domestic affairs. We are ready for detailed dialogue with the American side, including on arms control and strategic stability, the fight against terrorism and the peaceful resolution of regional crises. For us, it is absolutely obvious that resuming constructive bilateral collaboration meets the interests of Russia, the United States and the entire world,” he said in his speech receiving 23 new foreign envoys in the Kremlin.

At the ceremony to present letter of credence was John Joseph Sullivan who is an American lawyer and government official serving as the United States ambassador to the Russian Federation. He previously served as the 19th United States Deputy Secretary of State from 2017 to 2019. As a member of the Republic Party, President Donald Trump nominated him to the current post and was confirmed by 70-22 votes by Senate last December.

The Kremlin ceremony, is usually held twice during the year, officially marks the start of foreign ambassadors’ diplomatic activities in the Russian Federation, and the 23 envoys are from Europe, Asia, Africa, America and Australia.

With the newly arrived Canadian ambassador, Alison LeClaire, Putin stressed that Canada and Russia are neighbours in the Arctic and consequently share common responsibility for ensuring the sustainable development of this vast region, preserving the traditional way of life of the indigenous peoples and taking good care of its fragile ecosystem.

France is one of Russia’s key international partners. “We maintain contacts with President Macron, hold regular meetings, discuss issues such as a settlement in Libya, Syria and the Middle East in general, and interact on the Ukraine crisis within the Normandy format. At a bilateral summit held in Fort de Bregancon last August, we agreed to work jointly on ensuring stability and security in Europe,” according to the Russian leader.

Economic ties between Russia and France, including in industry and energy, continue to expand. On January 16, the Russian Seasons festival opened in France. It is designed to promote friendship and mutual understanding between the peoples of both countries.

According to Putin, Russia’s relations with the People’s Republic of China are at an unprecedentedly high level. In fact, this is a comprehensive strategic partnership. Bilateral trade is, consistently, being built up. The Power of Siberia gas pipeline has been put into operation. Ties in the field of defence and military-technical cooperation are developing successfully.

In April, we are planning to launch the Russian-Chinese cross Year of Scientific, Technological and Innovation Cooperation. The two countries coordinate their positions on key global and regional problems and work in unison at international organisations and associations, including the UN, BRICS, and the Shanghai Cooperation Organisation.

China and all of us have come face to face with the threat of the coronavirus. Leaders of the PRC have been taking resolute and energetic measures to halt the epidemic. We are ready to render help and every kind of assistance to the friendly Chinese people.

In addition, Russia attaches much importance to promoting constructive collaboration with the Federal Republic of Germany. “We regularly discuss with Ms Chancellor Angela Merkel current international and bilateral issues. We have supported the idea to hold a conference on a Libyan settlement in Berlin and participated in it in the most pro-active manner. Russia and the FRG are intensifying their mutually beneficial cooperation in trade, investment, and energy, and we intend to continue this joint positive work,” he said.

Russia and Ireland are striving for closer trade and economic cooperation, including in high technology, innovation and agriculture. There are opportunities for bilateral cooperation in education, culture and similar areas.

Russia and Serbia are linked by a strategic partnership that relies on traditions of friendship and the cultural, spiritual and historical affinity of fraternal peoples. Last December, meaningful talks were held with President Aleksandar Vucic in Sochi. Important agreements were reached on bilateral cooperation in an entire range of areas: the economy, trade, the power industry, culture and coordination on regional matters.

Putin said “Russia is doing much to help maintain the situation in the Balkans stable and safe. We want Belgrade and Pristina to reach a mutually acceptable solution to the Kosovo problem on the basis of UN Security Council Resolution 1244.”

Singapore is Russia’s highly promising partner in the Asia-Pacific Region. We appreciate our political dialogue that is actively promoting practical cooperation. The implementation of the free trade agreement signed by the Eurasian Economic Union and Singapore at the end of last year. It is designed to give an impetus to mutual trade and investment growth. Russia and Singapore hope to conclude a bilateral agreement on services and investment.

With Graeme Leslie Meehan, the new Australian ambassador, Putin reminded that Russia favours pragmatic and business-like cooperation with Australia, and added “we are giving support to the business circles of both countries in their effort to implement mutually beneficial joint projects and are facilitating the expansion of humanitarian contacts.”

Mongolia is a good neighbour and a tried and tested friend. Last year Russia and Mongolia celebrated the 80th anniversary of victory in the Battle of Khalkhin Gol and signed a termless Treaty on Friendly Relations and Comprehensive Strategic Partnership.

While expressing satisfaction the development of the trilateral Russia-Mongolia-China dialogue, Putin added “We consider it reasonable to complement our close political interaction with practical projects in trade, investment and humanitarian spheres. We would like to see Mongolia more actively involved in operations of the Shanghai Cooperation Organisation.”