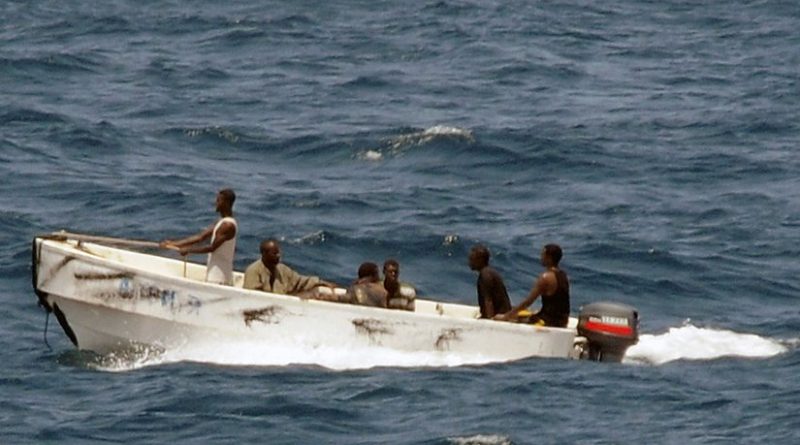 Lower oil and gas prices have led to tankers being anchored or loitering in areas in the region where they are vulnerable to being robbed by opportunistic attackers.

Oil and gas prices have fallen by more than one-half over the past year as a consequence of lower demand, weakening economic growth in some major economies, over supply, and increased shale oil production in the United States. As a consequence, offshore oil and gas exploration and exploitation has slowed down and there is lower demand for oil and gas tankers to shift cargoes of crude oil, petroleum products and liquid petroleum and natural gas (LPG and LNG).

The shipping analysts, Clarksons, have recently estimated that daily charter rates for LNG tankers have fallen from US$90,000 in 2013 to $60,000 at present. While it is mainly tankers that are affected, the Maersk container-shipping group has warned that global trade growth could slow this year in spite of low oil prices as Chinese, Brazilian and Russian economies turn in disappointing performances leading to lower demand for container shipping services.

As a consequence of these trends, many oil and gas tankers are sitting idle around the world, including in and around Singapore. Some are anchored or loitering underway in areas such as the southern part of the South China Sea and northeast of Pulau Bintan in the approaches to the Singapore Strait. The latter area is one where ships can cluster without having to pay port or anchorage fees while they wait to enter Singapore for bunkers, crew change, maintenance, or simply for their next job. However, and as we have seen in the past, they are vulnerable in these areas to armed robbery and petty theft.

Increased attacks in these areas are reflected in statistics from the Information Sharing Centre (ISC) maintained in Singapore by the Regional Cooperation Agreement on Combating Piracy and Armed Robbery against Ships in Asia (ReCAAP). ISC reports show there has been a surge in the number of incidents involving ships underway or anchored in these areas just to the east of Singapore.

Of the 54 or so actual incidents reported in the areas during 2014, about 38 were relatively minor acts of petty theft and eleven involved the temporary hijacking and theft of oil cargo from small product tankers. The perpetrators mainly came at night armed with knives/machetes, generally opportunistic in nature, and not violent in most of the incidents.

Leaving aside the oil theft cases, over half the vessels targeted were some type of oil tanker of which most were at anchor. The largest tanker attacked was the Bermuda-flagged, 81,1827 gross tonnage Stena Superior attacked on 25 September 2014 while anchored in the South China Sea. Three robbers boarded the ship but were spotted by the officer of the watch who raised the alarm and the robbers fled empty-handed.

A similar situation with increased numbers of idle ships and more attacks occurred during the Global Financial Crisis (GFC). This led to a marked downturn in international shipping with ships withdrawn from service due to lack of demand and placed at anchor with skeleton crews.

Many of these ships were anchored off Southeast Asian ports, including in Malaysian waters in the eastern approaches to the Singapore Strait where there was a surge in the number of attacks on vessels at anchor in 2009-2010. The number of attacks fell after the first three months of 2011 as the area was more actively patrolled by Malaysian authorities and ships returned to service.

Instead of reducing the crew and laying up a ship at anchor, a ship owner may prefer to keep it in service waiting for its next charter. This means they might be stopped or loitering even in potentially high risk areas such as the southern part of the South China Sea. This part of the sea between Pulau Tioman/Aur in Malaysian waters and Pulau Mangkai/Anambas in Indonesian waters saw an increased number of attacks in 2009-2010. An analysis of these attacks suggests that many of the vessels attacked were loitering in the area or steaming slowly through it rather than passing at their normal operating speed.

What can be done?

The ship-owning associations, BIMCO and Intertanko, have accused ReCAAP of down-playing the current situation. They have called for the littoral states – Indonesia, Malaysia and Singapore – to do more to patrol the waters most affected. However, while more patrols would certainly help, the fundamental responsibility for ensuring that a ship is not attacked rests with the ship owner or ship operator. While small crews on a large ship are challenged to provide all round security day and night, a vessel with a well-trained and vigilant crew taking all proper precautions against attack, should be able to reduce the risks of being boarded.

Private maritime security companies providing armed guards for ships multiplied during the Somali piracy crisis some years ago, but have since suffered a marked downturn in business with the improved situation off Somalia and lingering legal questions about their operations. They now have an incentive to promote the piracy threat in Southeast Asian waters and the need for armed guards.

However, while these guards may be employed on highly vulnerable targets passing through the region, there is no need for their employment on the vast majority of ships anchored or loitering in the region. The low economic losses and lack of violence involved in the typical attack simply do not warrant their services.

The solution to the current situation is multi-faceted. It requires a mix of better onboard security; increased patrols of the high risk areas; better coordination of patrols between the littoral states; and more effective onshore policing to deal with the robbers in their home villages, including closer liaison between regional law enforcement agencies.

*Sam Bateman is an adviser to the Maritime Security Programme at the S. Rajaratnam School of International Studies (RSIS), Nanyang Technological University, Singapore. He is a former Australian naval commodore with research interests in good order at sea.