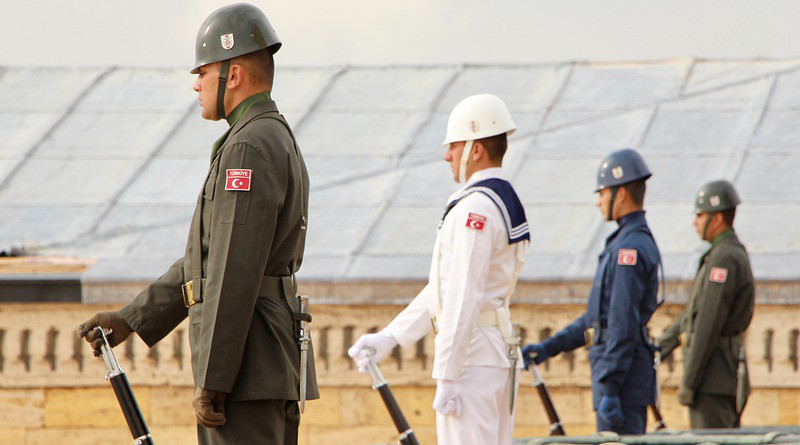 A glance at the Turkish Armed Forces’ recent combat record demonstrates that Turkey’s defense policy now extends well beyond its borders. Drones loitering in the Syrian airspace, navy frigates along the Libyan coast, Turkish military advisors in Tripoli alongside Government of National Accord (GNA) formations, mountain commando units operating in northern Iraq, and high-ranking Turkish officers in Qatar and Somalia are all pretty common to see now. Overall, the Turkish military is fast becoming an expeditionary actor in league with Ankara’s geopolitical worldview.

Turkey’s ambitious strategic posture is centered on three pivots. These are the naval transformation toward a blue-water force; the army’s expeditionary warfare concepts married to a growing tendency of resorting to proxy war agents in various battlegrounds from North Africa to the Levant; and expanding forward military bases in different parts of the Turkish zone d’influence.

The Turkish Navy, traditionally a coastal deterrent since the beginning of the republic era, is gaining a power projection edge. This change is centered on defense technology breakthroughs and a novel military-geostrategic approach.

On the technology side, considerable efforts to develop more robust capabilities are underway. Through the 2020s, six Reis-class (Type-214) air-independent propulsion submarines will enter into service, bringing in silent navigation capacity (The Turkish Navy, May 9). Turkey’s surface combat arsenal is also witnessing an uptrend. At present, the navy now operates four Milli Gemi (national vessel) MILGEM corvettes. The second batch, consisting of four more pieces, will consist of larger frigates with air defense capabilities and the indigenous CAFRAD X Band radar (The Presidency of Defense Industries, May 9; The Turkish Navy, May 9). These vessels will be equipped with Turkey’s new Atmaca anti-ship missiles with a range of more than 200 kilometers (ROKETSAN, May 9). Finally, the flagship of the Turkish Armada, the TCG Anadolu Amphibious Assault Ship (based on the Spanish Juan Carlos-1 class), is scheduled to enter into service by the end of 2020 (The Presidency of Defense Industries, May 9).

On the military-geostrategic side, a new concept termed Mavi Vatan (the Blue Homeland), ushers the Turkish Navy to more assertive horizons. The Blue Homeland refers to extending Turkey’s geopolitical calculus to the surrounding waters and high-seas around the Anatolian Peninsula. Revealingly, both the largest naval drills in the republic’s history—Mavi Vatan Tatbikatı-2019—as well as the naval cadet institute’s official journal were named after the concept (Turkish Naval Institute Mavi Vatan Journal, 2019).

Burgeoning blue-water naval warfare and power projection capabilities, married to the Mavi Vatan concept, manifests an emerging reality. Turkish political-military elites now consider the navy to be an active gunboat diplomacy asset, as visibly seen in the hydrocarbon bonanza in the Eastern Mediterranean.

Ankara is also getting more accustomed to proxy wars. Having succeeded the former Free Syrian Army and been trained by the Turkish military, the Syrian National Army—an umbrella organization of pro-Turkey armed groups in Syria—has now reached some 70,000-strong with more than 40 factions (SETA, 2019). During Turkey’s northeast Syria campaign in October 2019, the SNA fought alongside the Turkish offensive (Anadolu Agency, December 05, 2019).

More importantly, the Turkish administration hints at high-flying plans to its newly built proxy warfare capacity. As publicly confirmed by President Erdogan, some of the SNA fighters were transferred to the Libyan front to support the GNA’s operations (Asharq al-Awsat, February 22). According to estimates, the SNA contingent in Libya is at least 2,000-strong (Crisis Group, April 30).

Overall, in the 2020s, the Turkish Army actively operates in a broad axis, ranging from the Levant to the Horn of Africa, Qatar, and Northern Iraq, accompanied by indigenous components in military-strategic integrity.

Out of Turkey’s forward-deployed contingents, those with the highest geopolitical significance include the training mission in Somalia, Turkey’s forward-deployed corps in northern Cyprus since its military intervention in 1974, the joint base in Qatar, the publicly undetailed special forces and military advisory contingent in Libya, and forward-operating bases in Syria and northern Iraq.

Today, the Turkish military advisory missions are going beyond business as usual. Somalia is a good example in this respect. The Somali cadets graduate singing the Turkish Military Academy’s anthem (YouTube July 25, 2019). The African nation’s commandos are trained by the Turkish Army’s elite instructors and take their oaths in the Turkish language (TRT Haber, November 29, 2019; TRT Haber, June 21, 2019). Overall, in the Horn of Africa, Turkey has been rearing a whole new military generation.

Turkey’s ‘dronization’ trend has also shaped the overseas basing posture. Ankara deployed surveillance drones to northern Cyprus for the first time since the outset of its decades-long military presence on the island (Milliyet, December 18, 2019). Likewise, Turkish unmanned aerial vehicles are regularly operating in the Syrian, Libyan, and northern Iraqi skies.

Back in the 1990s, Ankara’s military policy was based on two main pillars.  First, there was the National Military Strategic Concept pioneered by the military leadership of then Chief of Staff (1998 – 2002) General Huseyin Kivrikoglu. The concept’s main pillar was the ‘active deterrence’ strategy, envisaging the use of coercive force to address security threats at their source. The second pillar was the ‘Two-and-a-Half War’ military-geostrategic paradigm. The ‘two wars’ referred to the combat readiness to fight simultaneous, inter-state armed conflicts in the eastern and western fronts, while the ‘half war’ referred to large-scale counter-terrorism operations against the PKK (Turkish MFA Strategic Research Center, 1996).

Turkey’s cross-border campaigns into northern Iraq, military ‘sparring’ with Greece in the Aegean, and its ‘maximum pressure’ policy on Hafez al-Assad’s Syria to expel the PKK terrorist network’s leader, Abdullah Ocalan, emanated from the abovementioned understandings. In other words, in the 1990s, Ankara was also keen to actively use its military might.

Turkey now shows political-military interest in a broader axis and the armed forces rely on a stronger defense industry. Besides, ultra-secularist military elite of the 1990s has been replaced by conservative AK Party governments. Consequently, for example, the Turkish-Israeli military cooperation gave way to the Turkey-Qatar defense partnership. Yet, at the end of the day, Turkish statecraft’s active military manifestation is long-lasting.

Of course, there arise risks from such an aspirant strategy. Forward-bases offer lucrative targets to hostile intentions, an expeditionary military posture means more burden on defense economics, and there is always the risk of getting overstretched in endless hybrid and proxy wars, among many other challenges. Nevertheless, today, Ankara’s military policy as to forward-bases is not a transactional one. Rather, its ‘military activism’, is there to stay (SETA, January 16).

*About the author: Dr. Can Kasapoglu is the director of the defense and security program at the Istanbul-based think-tank EDAM and a fellow with the German research institute SWP. Dr. Kasapoglu holds a M.Sci. degree from the Turkish Military Academy and a Ph.D. from the Turkish War College. Dr. Can Kasapoglu was an Eisenhower fellow at the NATO Defense College in Rome and a visiting scholar the the NATO Coopertive Cyber Defense Center of Excellence in Tallinn. His works can be followed @EdamDefense

Source: This article was published by the Jamestown Foundation at Terrorism Monitor Volume: 18 Issue: 10