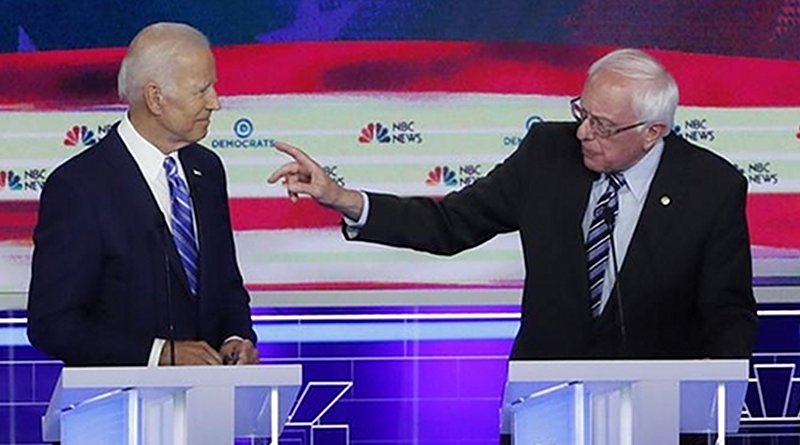 Though Bernie Sanders is less dishonest than any other of the U.S. political leaders who have contested in the 2016 and 2020 U.S. Presidential primary campaigns, no one should trust his endorsements of the DNC’s choice (which was what it was) of Joe Biden to carry the Party’s banner against Trump.

Sanders knows that he was cheated out of the nomination by the DNC’s billionaires in 2020, just as he had been in 2016. And he knows that Biden is just as corrupt as Trump. Why, then, does Sanders endorse Biden?

Is it because “the voters of the Democratic Party chose Biden?” Well, in a sense, they did — from 29 February 2020 onward they did, because the billionaires were no longer donating mainly to Pete Buttigieg (23 billionaires), Cory Booker (18), Kamala Harris (17), Michael Bennett (15) and Joe Biden as #5 (at 13). (Sanders was at 0.) So, they suddenly piled in, on Biden, right after Sanders’s win in Nevada, the last before the February 29th South Carolina primary, and the final score of billionaires became Biden 66, Buttigieg 61, Klobuchar 33, Steyer 13, Warren 6, Gabbard 3, Bloomberg 1, and Sanders still 0 (and nothing being shown for candidates who had withdrawn early).

Instead — and no one can say why or what with any certainty — Sanders probably has some commitment from Biden regarding national policies once Biden becomes the President. (Trump himself does everything he can to assist that outcome, Biden’s Presidency. He might not be doing it intentionally, but he is doing it very successfully.)

Furthermore, Sanders knows, or ought to know, that Joe Biden was one of the leading segregationists in the U.S. Senate and was condemned in 1977 by Ted Kennedy and others for the insincerity of his protestations to the contrary.

At the very same time in the 1960s when Sanders himself was being arrested in Chicago for demonstrating peacefully against the segregationist policies of Mayor Richard J. Daley, Joe Biden was a college playboy but subsequently lied to say that while in college he worked with civil rights leaders to end segregation.

Everything in politics is for only two purposes: winning power, and exercising power. Sanders’s promise to support the Party’s nominee was implicitly based upon his expectation that he would not be, yet again, cheated out of receiving its nomination. That expectation was not fulfilled.

The DNC knew, even back in May 2016, that Sanders would be stronger than Hillary against Trump, but they nonetheless rigged the results for Hillary against Sanders (and sometimes even blatantly) because their billionaires are more important to them than their voters are.

And the same happened with Biden against Sanders in 2020. So: what obligation does Sanders have now to the DNC? Clearly, none. What obligation does he have to the American people? To keep on his fight to become FDR’s successor! If he withdraws from it, then surely America is heading into a massive economic crash which will result (under a President Biden) in martial law, and, then, an extremely bloody revolution, the outcome from which can’t be predicted (but one can only hope that enough troops will quit or even mutiny against their commanders).

Consequently, only a private commitment from Biden can explain this.
In a dictatorship such as the United States is, a politician’s commitments made to the public, such as Barack Obama’s back in 2007 and 2008, that he would have a “public option” in his healthcare plan, are lies, which they have no intention to fulfill (and Obama dropped his “public option” virtually the day after he beat John McCain for the Presidency in November 2008). However, a politician’s private commitments to the billionaires who funded his career are kept and honored. As a general rule, also the private commitments that are made to other politicians — such as to Sanders — are kept.

We just don’t know what those commitments are.

Home » Does Sanders Have A Secret Deal With Biden? – OpEd