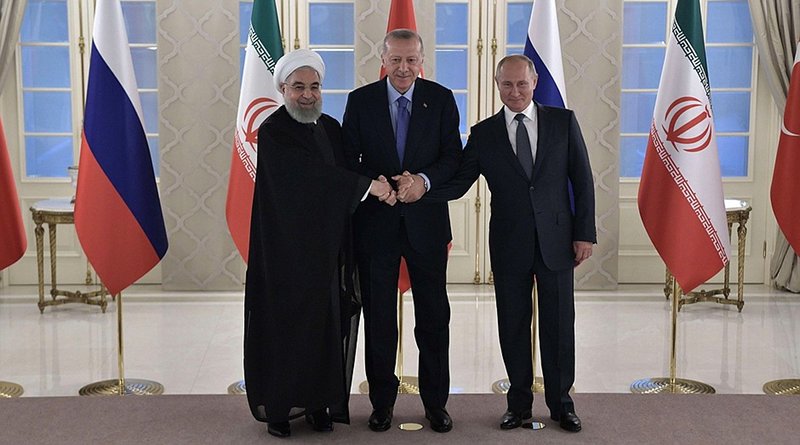 Meeting between the leaders of the guarantor states of the Astana process on the settlement in Syria. Russian President Vladimir Putin with President of Turkey Recep Tayyip Erdogan (centre) and President of Iran Hassan Rouhani. Photo Credit: Kremlin.ur

(RFE/RL) — Turkish President Recep Tayyip Erdogan hosted the leaders of Russia and Iran in Ankara on September 16 for talks aimed at finding a lasting truce in the ruinous eight-year Syrian civil war.

Presidents Vladimir Putin, Hassan Rohani and Erdogan each met separately before meeting for their fifth summit. They discussed Idlib, a region in northwestern Syria that is the last rebel stronghold.

They vowed to prevent a worse humanitarian crisis in the region and agreed to ease tensions there.

Last year, Russia and Turkey signed a buffer-zone agreement that is supposed to protect Idlib from a government offensive. Ankara mans 12 observation posts in the area to help enforce it, however it fears Syrian forces, who enjoy Russian air-power support, will advance on Idlib.

Hundreds of thousands of Syrians, some already displaced from other parts of the war-torn country, have moved toward Turkey’s border to flee Syrian air strikes, backed by Russia.

A major conflict in Idlib has raised the possibility of a mass refugee flow to Turkey, which already hosts 3.6 million Syrian refugees.

Russia and Iran support President Bashar al-Assad whereas Turkey, along with the United States, and European and Arab allies, has supported rebel factions.

“We are in a period when we need to take more responsibility for peace in Syria, when we [three countries] need to carry more weight,” Erdogan said.

Turkey’s Erdogan downplayed the threat of Islamic State in Syria, while Putin said: “Of course, we are worried by the situation in northeast of Syria, where sleeping cell of ISIS are emerging.”

Iran’s Rohani called on the United States to withdraw its troops from northeastern Syria.

Trump last year said he would withdraw U.S. troops from Syria against the advice of his top aides and commanders.

“Diplomacy and not (military) confrontation can secure peace in Syria,” Rohani said.

The joint statement also said the three had agreed on the composition of a constitutional committee to usher in the next phase of a political settlement in Syria.

Erdogan spoke of a “safe zone” in northern Syria with the Iranian and Russian leaders that would host up to 3 million refugees who currently live in Turkey.

However, the joint statement didn’t mention Turkey’s plans and neither Putin nor Rohani commented on them.

Their next summit will take place in Tehran, the joint statement said, and will focus on regional and international developments, as well as cooperation in various areas, TASS reported.