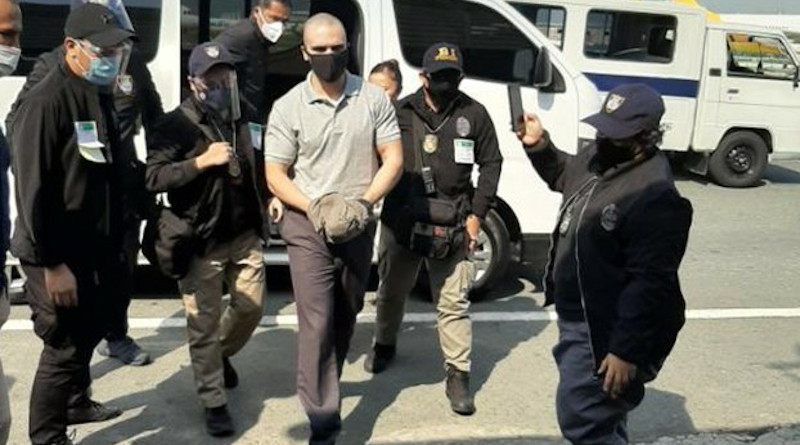 By Shailaja Neelakantan and Basilio Sepe

A soldier pardoned by the Philippine president for killing a transgender woman won’t face court martial proceedings in the U.S., a spokeswoman for the U.S. Marine Corps said Wednesday.

On Monday, a day after Lance Cpl. Joseph Scott Pemberton flew out of Manila on a U.S. military cargo plane, Philippine presidential spokesman Harry Roque said that U.S. officials promised in 2015 that they would try the serviceman in military court at home if he’s ever freed.

However, the Marine Corps told BenarNews on Wednesday that Pemberton had already served the court-imposed penalty for his actions prior to the pardon, so he wouldn’t be tried a second time.

“Consistent with the due process traditions shared by the United States and the Philippines and the running of the Statute of Limitations, the Marine Corps will not try Lance Cpl. Pemberton a second time for the same crime. He will be processed for administrative discharge.” Maj Melanie Salinas of the Marine Corp’s Communication Directorate said in an email to BenarNews.

A follow-up query about what specific kind of administrative discharge Pemberton would get wasn’t answered, but it appears that he was spared the other class of discharge – punitive – which would have required a court-martial and could result in greater loss of military benefits.

Pemberton was convicted and sentenced in 2015 for killing Jennifer Laude a year earlier. President Rodrigo Duterte pardoned him last week, overriding appeals filed by the government and Laude’s family against a court-ordered early release.

“The American authorities, including the representative of the [United States] Marine Corps, promised [after his conviction] that if ever Pemberton is freed it would only mean the [legal] process in the Philippines would end,” Roque said at a news conference in Manila on Monday.

“But upon his return, he will face court martial and they will then determine whether additional punishment would be meted out and whether he is qualified to remain in service.”

The U.S. Embassy in Manila said on Sunday that Duterte’s pardon meant that Pemberton no longer had any legal obligations in the Philippines.

“All legal proceedings in the case took place under Philippine jurisdiction and law,” the embassy said in a statement. “Lance Cpl. Pemberton fulfilled his sentence as ordered by Philippine courts and he departed the Philippines on Sept. 13.”

Duterte’s pardon sparked outrage in the Philippines with many saying it showed how a bilateral military pact, the Visiting Forces Agreement (VFA), unduly favored the U.S. Opposition leaders and activists were upset about what they said was preferential treatment for an American soldier in a former U.S. colony.

Philippine Justice Secretary Menardo Guevarra said in a statement on Sunday that the case again raises questions about the VFA.

“Though attended with intense conflict, it has provided valuable insights and lessons to ponder regarding the future of the Visiting Forces Agreement, the administration of criminal justice, and the exercise of the president’s constitutional powers,” Guevarra said.

The presidential pardon of Pemberton surprised many, because since coming to power, Duterte has been trying to distance himself from the U.S. and move closer to Washington’s rivals, China and Russia. In January, Duterte threatened to terminate the VFA with Washington but put that plan on hold in June.

“I am not favoring anybody – neither Pemberton, nor the family” of the victim, Duterte said. “But you know if there is a time where you are called upon to be fair, be fair.”

He said that he told Guevarra, who filed one of the appeals against Pemberton’s early release, “You have not treated Pemberton fairly, so I will release him. Pardon. Nobody can question that.”

Earlier this month, a Philippine court ruled that Pemberton be released after completing six years of his 10-year sentence due to good conduct.

In 2014, Pemberton, who was then 19, was in the Philippines as part of a U.S. contingent conducting military exercises.

He met Laude at a nightclub in Olongapo city, in Central Luzon. The two went to a motel where she later was found dead with her head pushed into a toilet, according to court records. Pemberton was seen leaving the motel.

Pemberton’s lawyer, Rowena Garcia-Flores, said on Sunday that her client “extends his most sincere sympathy for the pain he caused” the family of his victim.

“In the years he spent in confinement, he spent much time contemplating the many errors in his ways regarding the night of October 11, 2014. He wishes he had the words to express the depth of his sorrow and regret,” Garcia-Flores said.

Virginia Suarez, lawyer for the Laude family, said on Sunday that the family feels betrayed by Duterte’s pardon of Pemberton.

Last week, rights and LGBTQ groups took to the streets to protest the presidential pardon.

It “is open season for discrimination and violence against transgender people and [shows] that American soldiers will continue to get away with murder on Philippine soil,” said a “unity statement” issued by various LGBTQI groups.

Jeoffrey Maitem in Cotabato, Philippines contributed to this report.

Home » Marine Pardoned By Duterte To Walk Free In US