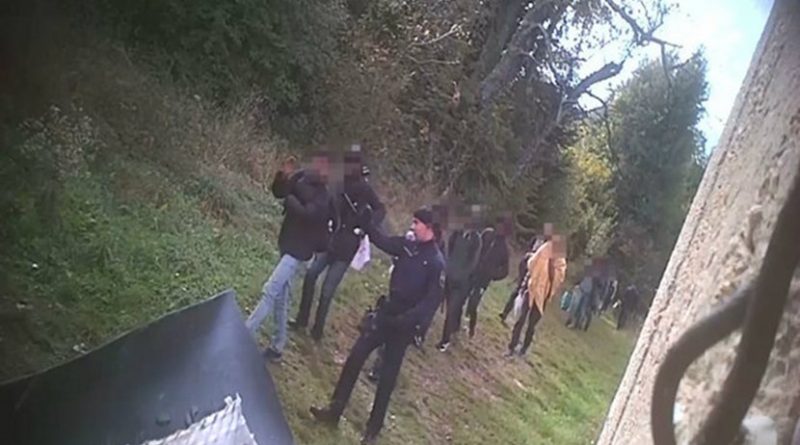 A Croatian watchdog organization on Sunday published video material that it says proves that the Croatian police systematically and violently expel migrants and refugees from the country on border with Bosnia.

It said it received an anonymous message on 20 November, containing the video footage from the area.

According to BVM, the videos, recorded with hidden cameras in a forest near Lohovo, in Bosnia, were filmed between September 29 and October 10 and show 54 illegal group expulsions of refugees, so-called “pushbacks”, from Croatia to Bosnia.

“At least 350 refugees, including small children, minors and women, can clearly be seen on the video recordings as victims of these pushbacks, which take place several times a day and at night. Should they occur just as frequently as during the filmed period, the number of push-backs at this border crossing alone would exceed 150 per month,” BVM said.

“For security reasons, the informants themselves prefer to remain anonymous; yet for the extensiveness and level of detail of the material in concordance with other reports, we consider it authentic,”  BVM’s press release added.

On Tuesday, the international watchdog Human Rights Watch accused Croatian police of abusing, beating and extorting money from migrants and refugees while not allowing them to seek asylum in the country.

Human Rights Watch interviewed 20 people, including 11 heads of families and one unaccompanied boy, who said that Croatian police deported them to Bosnia and Herzegovina without due process after detaining them deep inside Croatia.

Sixteen of them, including women and children, said police beat them with batons, kicked and punched them, stole their money, and either stole or destroyed their mobile phones, the report said.

On Tuesday Croatian Interior Ministry said a description of Human Rights Watch’s findings was given, before they were published, to Interior Minister Davor Bozinovic.

He reminded them that as an EU member state, Croatia had to protect the EU and state  border and stop illegal migrants.

“Following all complaints received by state institutions or civil society organizations containing allegations of violence committed by the Croatian police over migrants, inspections have been carried out in police administrations,” the ministry wrote.

Until now, none of the cases established that police used undue force, it added, saying migrants made claims to violence to assist their applications for asylum.

However, BVM’s report disputes this. “According to first-hand accounts, the officials inflict violence during about one in five push-backs in Lohovo … Here, as in other locations, mobile phones are almost always destroyed and returned in a yellow plastic bag”, it said.

“These push-backs are not conducted at an official border checkpoint are [done] without the presence of Bosnian officials and are therefore illegal,” it continued.

It said push backs and police violence violate international law, in particular, the Geneva Convention on Refugees, the EU Charter of Fundamental Rights and Article 14 of the Universal Declaration of Human Rights.

The video material “proves for the first time that the Croatian police systematically carry out collective expulsions on Bosnian territory, far away from official border posts”, BVM said.

“We demand that the human rights violations at the Bosnian-Croatian border stop immediately. For this, it is necessary that they are examined in an official investigation both internally, by the Croatian Interior Ministry, and by the European Commission, which co-finances Croatian border security”.

Numbers of migrants to Europe have fallen this year. However, new routes have opened up at the same time.

The Commission estimates that 6,000 migrants and asylum seekers are currently in Bosnia and Herzegovina.