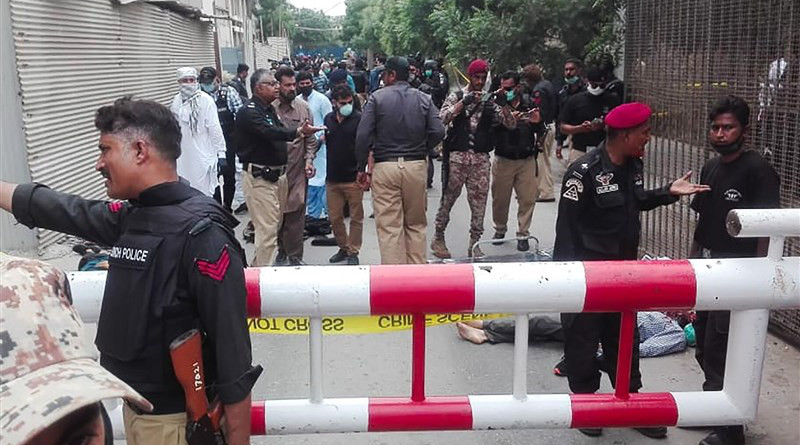 The Pakistan Stock Exchange attack on 20 June 20202 and the accompanying spate of violence by various ethno-separatist groups mark a new wave of terrorism in Pakistan. This new wave should be seen in the broader context of the rapidly evolving geopolitical situation in the region.

On June 29, 2020, four militants of a Baloch insurgent group, the Baloch Liberation Army (BLA), stormed the Pakistan Stock Exchange (PSE), the financial nerve centre of the country. However, the attackers were neutralised by the security guards stationed outside the PSE building’s main gate. The attack left seven people, including four militants and three security personnel, dead and as many injured.

Before this, a series of attacks on the security forces in Balochistan and Sindh provinces as well as the re-emergence of the Muttahida Qaumi Movement London (MQM-L)’s militant wing in Karachi point to the revival of ethno-separatist groups in Pakistan. Though Pakistan’s top political and military leadership have hinted at alleged Indian involvement in the PSE attack, there is a troubled history of mistrust and ethnic grievances in Balochistan and Sindh fueling recruitment and driving ethnic violence. The Baloch and Sindhi separatist groups have forged a new tactical alliance against Chinese economic interests in Pakistan.

This new wave of violence in Pakistan should be seen in the broader context of shifting geopolitical sands in South Asia, which have thrown up new opportunities to several militant groups. The expected US withdrawal from Afghanistan, the intra-Afghan peace process and the growing Chinese economic footprint under the Belt and Road Initiative (BRI) are leading to geopolitical realignments in the region.

Given its pivotal position at the crossroads of South and Central Asian regions, Pakistan finds itself in the crosshairs of these geopolitical developments.

Of the 73 militant groups banned by the National Counter Terrorism Authority (NACTA), Pakistan’s central counter-terrorism agency, 13 are ethno-separatists. The lack of an inclusive development model and ham-fisted policies of the state lie at the heart of political alienation and socio-economic grievances in Sindh and Balochistan.

The onset of the US$62 billion China Pakistan Economic Corridor (CPEC), the flagship project of the Chinese BRI, in Balochistan has further disenfranchised the Baloch groups. CPEC, which originates from China’s Xinjiang province and culminates at Balochistan’s Gwadar port, is a series of infrastructure projects involving highways, rail tracks, ports and electric grid stations, among others.

Balochistan is rich in minerals and due to its lucrative location, has the potential to be developed into a vibrant economic hub in the future. For instance, Balochistan’s Reko Diq copper and gold mine has an estimated $5.9 billion in copper reserves and $4.5 million in gold reserves. The Baloch fear that they will be turned into a minority in their province and robbed of their rich mineral resources. The Baloch separatist groups view China as a coloniser and aggressor.

Claiming responsibility for the PSE attack, BLA’s spokesperson maintained “it was intended to target the Pakistani economy and Chinese economic interests, in response to China’s exploitative plans in Balochistan,” an apparent reference to China’s 40 per cent ownership of the PSE. In 2016, a Chinese conglomerate, consisting of China Financial Futures Exchange Company Limited, Shanghai Stock Exchange and Shenzhen Stock Exchange, combined with Pak-China Investment Company Limited and Habib Bank Limited to purchase 40 per cent PSE shares.

The BRAS has been established to pool together human and financial resources to extend these groups’ geographical outreach, improve operational coordination and diversify attack targets in Pakistan.

Two types of separatist groups operate in Sindh, the MQM-L affiliated militant wing, the Mohajir Resistance Force, operating in Karachi and the Sindhi separatist groups such as the Sindhudesh Revolutionary Army (SRA) and Sindhudesh Liberation Army (SLA)  ̶  active in the interior parts of the province.

The reactivation of MQM-L’s militant wing in Karachi also fits into the broader pattern of the revival of ethno-separatist groups in Pakistan. On June 26, the Sindh Rangers and Karachi police arrested three terrorists belonging to the MQM-L’s militant wing who were planning low-intensity attacks in different parts of the port city.

The post-arrest investigations also revealed that MQM-L is re-organising several small cells to carry out terrorist attacks in Karachi.

In light of the evolving security environment, Pakistan’s internal security framework enshrined in the National Action Plan (NAP), a 20-point counter-terrorism and extremism roadmap, formed in January 2015 needs to be revised.

Critical points of the NAP included eliminating terrorist infrastructure, madrassa reforms and the ban on hate speech, among others. NAP’s lopsided focus on hard measures and less than ideal implementation on soft measures make Pakistan’s counter-terrorism gains fragile and reversible.