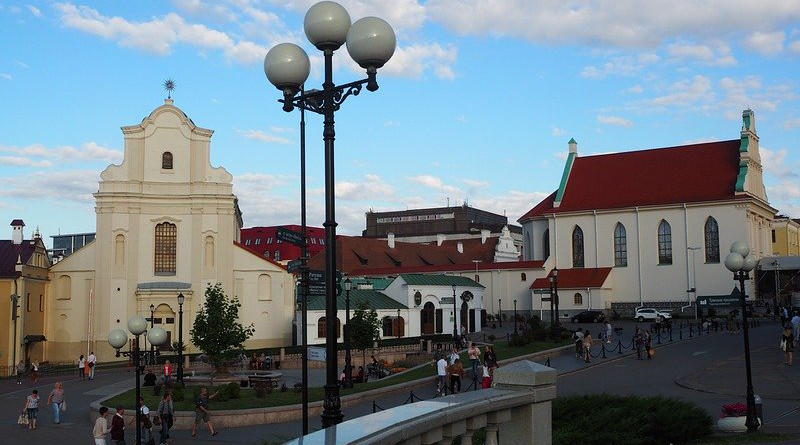 The religious situation in Belarus is changing just as quickly and radically as the political one, with the tone-deaf Metropolitan Pavel of the Moscow Orthodox Church losing ground so quickly that some say he may soon be replaced and the Roman Catholics and Evangelicals picking up support.

The situation is now so fluid that it may very well be that Moscow, both the Kremlin and the Patriarchate, will see autocephaly for a Belarusian Orthodox Church as preferable to a wholesale shift from Orthodoxy to Catholicism and Protestantism, something that would definitely root Belarus in the West forever.

Aleksandr Soldatov, who comments frequently on religious affairs, says that the Moscow Patriarchal church in Belarus is losing out because it hasn’t spoken out against Lukashenka’s use of force against the protesters while the Roman Catholic leadership has and is gaining support as a result (novayagazeta.ru/articles/2020/08/15/86684-iskushenie-diktatorom).

During his 26 years in power, Lukashenka, who identifies himself as “an Orthodox communist,” has worked closely with the Belarusian Orthodox Church, allowing Moscow to name its head – even when that individual as is the case of Pavel isn’t even a citizen of Belarus – and blocking the registration of any Orthodox church not subordinate to Moscow.

Metropolitan Pavel has responded in kind and sent a message of congratulations on Lukashenka’s reelection, something that infuriated many priests and lay believers. Yesterday, when Belarusian security services attacked protesters, Pavel belatedly tried to correct the record and met with Christian groups protesting the falsification of election results.

But so far, Pavel has ignored the appeal by several hundred Orthodox from Lida sent to him the day before calling on him to condemn the use of force against the people. Other Orthodox priests are also demanding that the church be worthy of its calling and side with the people against the police.

The metropolitan’s ham-handed approach to the delicate political situation has sparked speculation that Pavel may soon be ousted and replaced perhaps by Metropolitan Ilarion who currently serves as the de facto foreign minister of the ROC MP and who has shown himself more diplomatic in dealing with complicated situations.

That is the view of Illarion’s former assistant, Leonid Sevastyanov, who now heads the World Old Believers Union, Soldatov says. In his view, “Illarion has ever chance to become the next exarch of Belarus.”  If so, he will have to deal with the likelihood of a new drive for autocephalous status for the Orthodox in Belarus.

That of course is “high politics” within the church, the Russian expert says. But now, “the Belarusian people, feeling deceived, denigrated and attacked by its own authorities is more interested in the moral assessment of what is taking place in the country from those who are as it were in the first instance called to give such an assessment.”

As of now, the most highly placed representative of the Moscow Patriarchate church in Belarus is Grodno Archbishop Artemy who has denounced police violence and come out in support of the people, something Belarusians reportedly are extremely pleased about (orthos.org/biblio/publication/2020/08/14/obrashchenie-arhiepiskopa-grodnenskogo-volkovysskogo-artemiya-k-kliru).

But such departures from the line Pavel and Moscow Patriarch Kirill have taken aren’t likely to help, especially since many in the Orthodox establishment in the Russian capital are criticizing Lukashenka for not taking a harder line against the protesters and for failing to ask Moscow to take Belarus “back” into Russia.

With friends like these, Soldatov says, the Orthodox church in Belarus doesn’t need any enemies.  But it does have competitors and the most important of these is the Roman Catholic Church which from the very beginning of the clashes in Minsk and other cities has taken a clear position against any use of violence and more recently has criticized the regime for shedding blood.

Having concluded that Lukashenka isn’t going to keep power, Catholic Metropolitan Kondrusevic published a message in which he directly accused Lukashenka’s regime of shedding the blood of innocents (catholic.by/3/news/belarus/12014-zvarot-artsyb-skupa-tadevusha-kandrusev-cha-da-dzyarzha-nykh-ulada-respubl-k-belarus#ad2).

All the Catholic bishops of Belarus followed him in that, and certain Catholic churches have now become refuges for protesters and some priests have even stood up to Lukashenka’s police. Belarusians can see which church is on the side of God’s law and on their side too and which is on the side of the police in violation of the law of God.

They won’t forget this, and that will drive religious developments in Belarus in the future in a very different direction than they had appeared to be going, whatever happens to Lukashenka and whenever he departs the scene.